The “cost-of-living crisis” and failure to mitigate climate change are the most acute global risks, according to the World Economic Forum (WEF) which opened in Davos, Switzerland, on Monday.

The forum’s risk assessment report 2023 released last week identifies a “polycrisis” of risks, most of which relate to environmental and societal issues, such as biodiversity loss, ecosystem collapse, and large-scale involuntary migration.

However, despite the prominence of environmental concerns, environmental activists have already called out WEF leaders for hypocrisy.

On Sunday, protestors blocked a number of private jets from landing at Davos airport – over 1000 jets are expected to bring the rich and powerful to the meeting, causing significant carbon emissions.

Meanwhile, Oxfam also called for new measures to tax the world’s super-rich, releasing research on the eve of the meeting showing that, since the COVID-19 pandemic started in 2020, the richest 1% had “grabbed nearly two-thirds of all new wealth” – almost twice as much money as the bottom 99% of the world’s population.

“A billionaire gained roughly $1.7 million for every $1 of new global wealth earned by a person in the bottom 90%,” according to Oxfam, which calculated that a tax of up to 5% on the world’s multi-millionaires and billionaires “could raise $1.7 trillion a year, enough to lift two billion people out of poverty”.

The WEF, the first in-person meeting of the annual event since 2020, was set up to promote public-private collaboration, and has become a marketplace for world leaders to promote investment in their countries and for businesses to court government support.

However, the annual risk assessment frankly acknowledges the dire economic conditions faced particularly by people in poorer countries thanks to the pandemic and Russia’s war in Ukraine.

Based on interviews with key leaders, the cost-of-living crisis is ranked as the most severe global risk over the next two years.

“We have seen a return of ‘older’ risks – inflation, cost-of-living crises, trade wars, capital outflows from emerging markets, widespread social unrest, geopolitical confrontation and the spectre of nuclear warfare – which few of this generation’s business leaders and public policy-makers have experienced,” it warns. 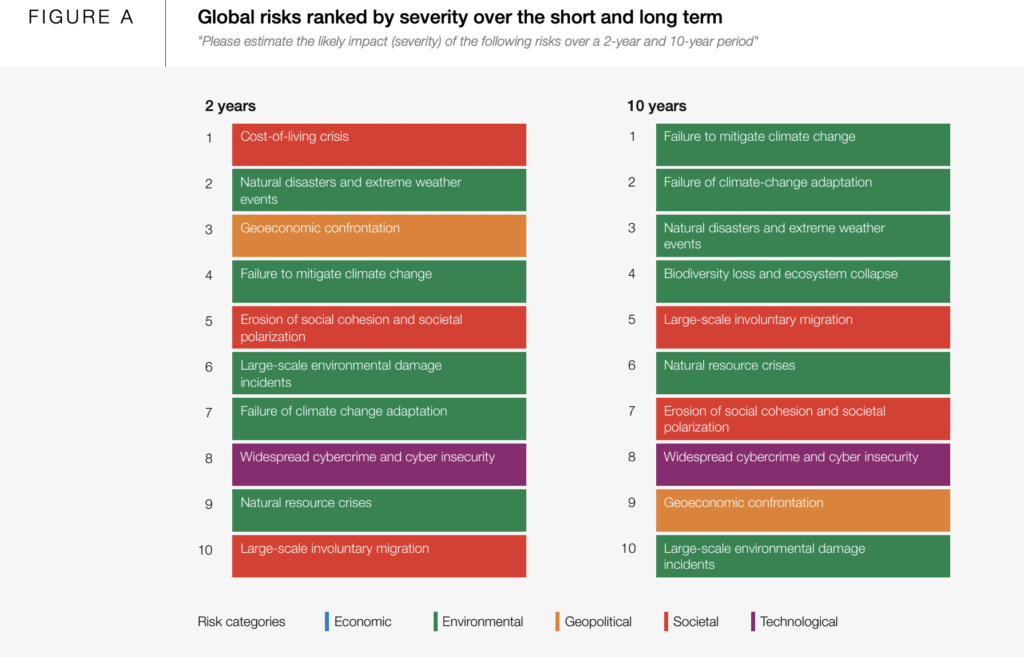 “These are being amplified by comparatively new developments in the global risks landscape, including unsustainable levels of debt, a new era of low growth, low global investment and de-globalization, a decline in human development after decades of progress, rapid and unconstrained development of dual-use (civilian and military) technologies, and the growing pressure of climate change impacts and ambitions in an ever-shrinking window for transition to a 1.5°C world.”

Taking all these factors into account, the WEF warns of a “unique, uncertain and turbulent decade” ahead.

Nine risks are featured in the top 10 rankings over both the short and the long term, including “geoeconomic confrontation” and “erosion of social cohesion and societal polarisation”, alongside “widespread cybercrime and cyber insecurity” and “large-scale involuntary migration”.

Health is the focus of a number of sessions of the forum, which runs midday on Friday These include sessions on pandemic preparedness, women’s health, tuberculosis and equity.