The long-delayed 2020 edition of the Tokyo summer Olympics opened Friday against the sober backdrop of soaring COVID infection rates, but with plenty of pomp and ceremony nonetheless –  including a massive fireworks display and an aerial show of drones resembling planet earth hovering above Olympic Stadium, while John Lennon’s “Imagine” echoed across the night sky.

With mostly – but not always – masked Olympic athletes parading around the nearly-empty stadium, the games are being widely perceived as a global test case for how “normalization” might look against the persistent pandemic risks – now being fueled by the highly infectious Delta variant spreading across Japan.

Despite weeks of  speculation over whether the games might be canceled at the last minute due to growing public health risks, critics said that the decision of the International Olympic Committee (IOC) organizers to go ahead irregardless, was not a surprise – in light of the billions of dollars in TV broadcast revenues at stake. 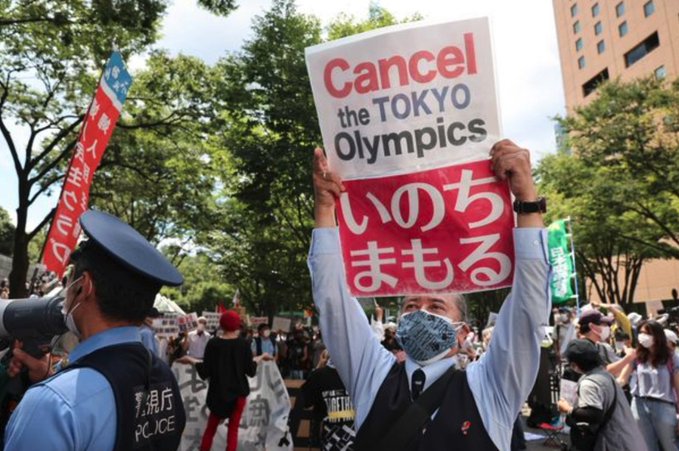 But the measures being taken by Japan and the IOC to cope with the obvious risks, were also strict – and unprecedented. They contrasted sharply with the risky in-person crowds of spectators that marked the recent European football cup matches.

Some 11,000 Olympic athletes were being carefully sequestered in Japan’s Olympic village – consigned to live, eat and work out under strict supervision at the village – and with their personal contacts limited to their immediate trainers and team.

That, after undergoing a rigorous regime of pre- and post- travel testing, as well as quarantine upon arrival. Although vaccination was not a mandatory condition for participating, some 80% of participating athletes have been vaccinated, the IOC reported.

With the 68,000 seat stadium closed to the public, Tokyo residents were being urged to stay home and watch the games on TV.

Even so, as of opening night, some 200 of the 11,000 athletes competing had already tested positive for COVID. That included athletes from: Australia, Chile, Czech Republic, Mexico, Netherlands, Russia, South Africa, United Kingdom and the United States.

Among the Czech delegation, where six athletes all fell ill, an unvaccinated team doctor Vlastimil Voráček, who had previously claimed that gargling and sucking lozenges can prevent COVID was the first to test positive. All travelled together on a charter flight.

With case counts inside the village growing, Guinea’s government initially announced that its national team would pull out of the Tokyo Olympics, but later reversed the decision.

“Due to the resurgence of COVID variants, the government, concerned with preserving the health of Guinean athletes, has decided with regret to cancel Guinea’s participation in the 32nd Olympics scheduled for Tokyo,” said the initial Guinean statement, which was retracted after the government said that it had received more guarantees from Japanese health authorities.

Individual top athletes from other countries opted to sit out the games at home – rather than risk traveling only to become infected.

Although Japan’s overall infection levels remain well below those of European countries such as the United Kingdom and France, or even the United States – those latter nations all have greater levels of COVID variant protection, with some 40-50% or more of their population fully vaccinated.

While only 23% of Japanese are fully vaccinated so far, vaccines are now becoming more available, and the government is urging people to turn out en masse to get the jabs.  Large-scale vaccination venues were set up by the Tokyo metropolitan government to speed up the pace of the immunizations.

But until rates rise further, the overriding concern remains the risk of a dangerous spike in serious cases.

Protests on streets and social media

The public opposition to the staging of the games – despite the measures put in place – was plainly evident on opening night.

Hundreds of masked protestors gathered outside of the Olympic stadium venu with placards bearing slogans such as “Olympics killing the poor” – only to be met and cordoned off by even more masked police.

Here's the protest just outside Olympic Stadium in Tokyo, which is easily audible inside during quiet moments pic.twitter.com/AUQQrTDjcF

On social media, too, opponents of the games were making themselves heard.

“It’s On!  Let the games begin,” tweeted the IOC as the “Olympic cauldron” was set afire by the Olympic torch that had been kept alight throughout the dark pandemic year – marking the formal start of the games at the end of the ceremony.

An incredible firework display fills the sky to mark the beginning of #Tokyo2020. #OpeningCeremony #StrongerTogether pic.twitter.com/RqZGMKeNdE

“No” one Japanese protestor  tweeted back

“There’s no beds in hospitals that are vacant anymore in Tokyo.  The infection cases are increasing rapidly. People are going to die in their own home, without any medical care.”

Those competing themes of sobriety and excitement will accompany the games throughout the coming two weeks – and only at the end will it become clear which message will remain as the legacy of the OIympics 2020-2021.