Midway through last year, the head of the Africa Vaccine Acquisition Task Team, Strive Masiyiwa, angrily accused the global COVID-19 vaccine acquisition platform, COVAX, of misleading African countries about its ability to procure vaccines for them.

Masiyiwa’s bitter remarks came after months of Africans watching Europeans and North Americans being vaccinated against COVID-19 while no vaccines were available for them – even if their governments had the money to pay for them.

By the end of last year, a special meeting of the World Health Assembly had resolved to set up an intergovernmental negotiating body (INB) to negotiate an accord to guide future pandemics, and all member states agreed that it needed to be based on equity. The INB is expected to submit a draft accord to be negotiated at the 77th World Health Assembly in 2024.

This week, an independent evaluation of the Access to COVID-19 Tools Accelerator (ACT-A), COVAX’s parent body concluded that “a different model for pandemic response will be needed in future”.

The review – which combined interviews with over 100 key informants, a survey and a review of documents – comes as the World Health Organization’s (WHO) INB is preparing a “zero draft” to kick off negotiations on the pandemic accord. 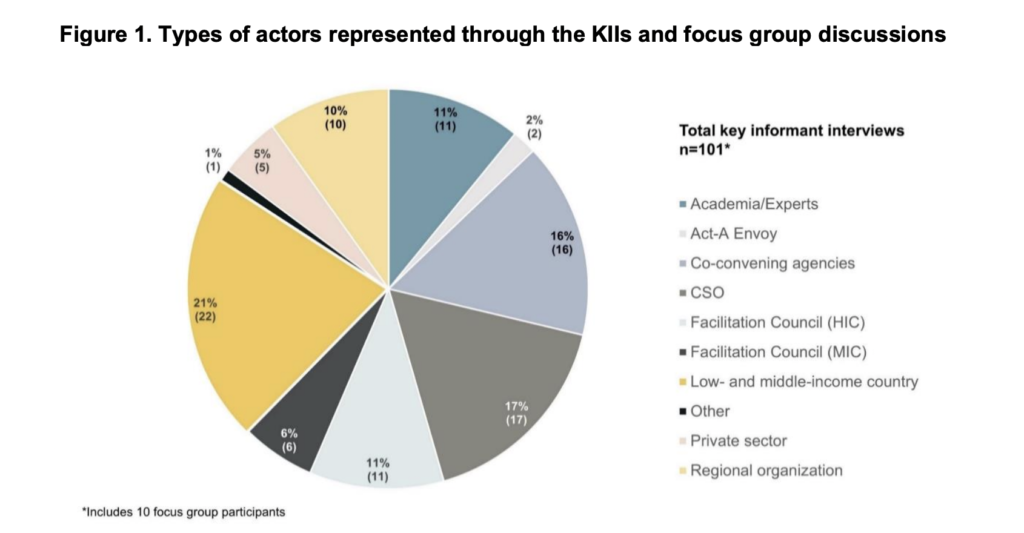 The ACT-A comprised three pillars – diagnostics, therapeutics, vaccines (COVAX) and a fourth cross-cutting pillar, the Health Systems and Response Connector (HSRC), which was viewed as a flop.

Interestingly, the review’s main criticism of COVAX is that its global scope as the key vaccine-purchasing agent for the world was “too ambitious” and that a “more targeted approach” would have been more useful.

This observation is based on the failure of high-income countries to go through COVAX to buy its vaccines, meaning that COVAX was “unable to play the market shaping role it first envisioned”.

The crux of any successful pandemic accord will be to ensure that wealthy countries don’t hoard all the available diagnostics, therapeutics and vaccines to fight the next killer pathogen – an almost impossible task.

Instead of expecting wealthy countries to subject their procurement to a global body, it might be more effective for a future pandemic body to “focus on a smaller set of lowest-income countries”, according to the review.

Despite the criticisms, COVAX’s performance in improving access to COVID-19 vaccines in the 92 Advanced Market Commitment (AMC) countries was ranked 7.5 out of 10, the highest survey rating.

By 15 September, it had delivered 1.72 billion doses although massive vaccine inequalities persist.

Almost two-thirds of respondents thought that ACT-A’s operating model should not be replicated, citing problems including “insufficient accountability, limited meaningful engagement of low- and middle-income countries (LMIC) and regional bodies, and an insufficient focus on delivery”.

Prioritising speed and using existing global health agencies to respond to the pandemic had “compromised accountability and transparency”, according to the review.

“Insufficient manufacturing capacity, unhelpful member state responses to COVID-19, and issues around ‘last mile’ implementation were the three factors that had the biggest impact on ACT-A’s ability to deliver on its targets,” according to survey respondents.

Civil society organisations and academics listed the lack of technology transfers and the management of intellectual property as the most significant challenges.

“Going forward, a new platform should be established that involves all key R&D partnerships and coordinates R&D across product types and diseases,” the review recommends.

The World Bank has already heeded this, and last month it set up the Financial Intermediary Fund (FIF) for Pandemic Prevention, Preparedness and Response (PPR) to “provide a dedicated stream of additional, long-term financing to strengthen PPR capabilities in low- and middle-income countries and address critical gaps through investments and technical support at the national, regional, and global levels”.

The lack of manufacturing capacity, and weak country health systems are key challenges to address before the next pandemic.

Previously, the Independent Panel for Pandemic Preparedness and Response (IPPPR) proposed that a council for pandemic preparedness, made up of senior political leaders, be established under the United Nations General Assembly.

ACT-A was guided by a facilitation council chaired by Norway and South Africa, but the co-chairs lacked global clout and spent a lot of energy appealing to world leaders of wealthy countries to share their pandemic products with others.