Signatories to the new African Medicines Agency Treaty have now reached 28 countries – more than half of the African Union’s 55 member states – with the balance tipping as Uganda signed the treaty instrument last week.

On Friday, 5 November, after more than a decade of preparations, the African Medicine Agency (AMA) treaty also came into force officially – clearing the way for the AMA to begin operations as a formal entity.

And support for the treaty seemed to be picking up momentum with Cote d’Ivoire also signing the treaty on 29 October just ahead of Uganda’s signature on 3 November.

See all the data here on our special website: African Medicines Agency Countdown, where we will be tracking all the latest developments in stories and interactive infographics. 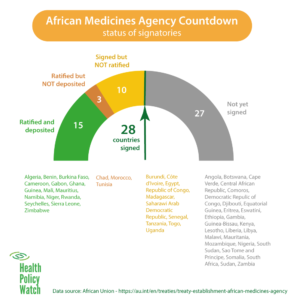 Despite the building support for the AMA, it will take more time, money and most of all – signatories from more of Africa’s powerhouse nations – to ensure that the new AMA entity can fulfill its mandate to ensure more rapid access to safer, newer and higher quality medicines across the continent.

South Africa, Nigeria, Kenya and Ethiopia are among the 27 AU member states that have yet to even sign, yet alone ratify, the treaty document, which was first approved by the African Union in 2019.

But with the AMA treaty coming into full force, exactly one month after the first 15 countries ratified and deposited the treaty instrument, no one is losing time.  An AU meeting, set for February 2022, will select a country to host the new AMA headquarter and operations.

Following that, formal structures will have to be set up and money raised to support its many crucial tasks.

While a long road remains, AMA special envoy, Michel Sidibé said that the treaty’s entry into force is a ‘historic moment’.

Historic moment today with the entry into force of the African Medicines Agency treaty. Bravo to the member states! We are grateful to President @AUC_MoussaFaki for his inspirational leadership and thank @AmiraDSA, @NEPAD_Mayaki, @DrTedros and all partners for their support. pic.twitter.com/a9IFitbFWz

AMATA called upon all other AU member states to quickly follow suit. Some 28 countries have so far signed the treaty, the majority in western Africa.  Among those signatories, 10 have yet to ratify the treaty and three have still to deposit their ratifications with the African Union.

The COVID-19 pandemic has sharpened the need for a continental agency that is able to fast-track approval for crucial vaccines and other medical products, AMATA said in its satement Friday: “COVID-19 has demonstrated that health security will only be achieved through concerted efforts and cross-border collaboration.

“We call on all AU Heads of State to seize this historic opportunity to have one regulatory affairs oversight across the continent to enhance national, regional and continental regulation of medical products and oversee rapid and effective market authorization of safe, quality, effective and accessible medical products, for the good of all African people.”

AMATA also  called on the AMA Governing Board to rapidly move to put into place:

AMATA also asked that the AMA governing board  “recognise patients as key partners in the management structures and development of the agency”.

AMATA executive board member Dr Maïmouna Diop Ly told Health Policy Watch that three critical tasks lay ahead in order for the agency to be successful.

“There is a need to ensure that a critical number of countries sign the treaty to enable a quick operationalization of AMA,” said Diop Ly.

“The statutory organs – the conference of state parties, governing board, secretariat and technical committees – should be put in place to ensure its functionality,” she added.

“Finally, the allocation of adequate resources from countries’ contribution and partners is needed and should be part of the discussion of 2022 national budgets,” concluded Diop Ly, who is a health specialist with the African Development Bank and an advisor to the Senegal-based public health NGO, Speak-Up Africa.

Andy Gray, senior lecturer in pharmacology at the University of KwaZulu-Natal in South Africa, said that AMA’s greatest potential lies “in the field of harmonisation of regulatory systems, which should reduce the barriers to market entry in Africa”.

“The AMA is not intended to be a supranational regulator, and will not make decisions in the way the EMA does, but it could help in bringing national medicines regulatory authorities together, simplifying systems and reducing redundancy,” explained Gray.

Over a quarter of the continent’s medicines are substandard or falsified, while only 2% are produced in Africa, according to AUDA.

This will also bring access to new and innovative technology for vaccines, medicine, medical devices, etc that will serve patients.

The huge challenge of expanding universal health coverage – including health  insurance –  can also be advanced more systematically, with the support of new AMA structures – which should ease affordable access to medications, experts say.

Proposed nearly a decade ago

A continental medicine agency was first proposed a decade ago, and African Union member states adopted the AMA treaty almost three years ago. But the treaty could only be enforced once 15 AU member states had formally notified the AU Commission that they had ratified the treaty.

This happened 30 days ago, when Cameroon became the 15th country to do so, thus setting in motion the formal establishment of the agency.

The main aims of the AMA, as listed by the AU Development Agency (AUDA), are to:

Responding to the medical crisis caused by COVID-19, the International Alliance of Patients’ Organizations (IAPO) helped to set up a lobby group, the African Medicines Agency Treaty Alliance (AMATA), to push for the speedier establishment of the agency.

Meanwhile, Jessie Lapenn, the US Ambassador to the African Union, described the AMA as critical important to improving health security in Africa.

“The  AMA will be another critically important African institution that is part of the broader architecture that will be crucial for strengthening the continent’s health security,” Lapenn said at Thursday’s Africa Centres for Disease Control media briefing.

“The US government and US private sector are very much looking forward to collaboration with AMA,” Lapenn added.

Along with Cameroon, other countries to have both ratified the AMA and “deposited the instrument of ratification” at the AU (a letter from the head of state informing it of ratification) are predominantly west and north African, and/ Francophone nations, including: Algeria, Benin, Burkina Faso, Gabon, Guinea, Mali, Mauritius, Niger, Seychelles, and Sierra Leone.

That may be due, in part, to the fact that the AU’s Special Envoy on the AMA is Michel Sidibé, Mali’s ex-Minister of Health.

Now it will be up to southern, eastern and northern Africa to catch up – although Rwanda, Namibia and Zimbabwe have also been among the first to have ratified and deposited the treaty instrument.  They were followed by Uganda, which signed the treaty on November 3.

Uganda on November 3, signed the treaty for the establishment of the African Medicines Agency (AMA). #UgMoving4wd pic.twitter.com/a8sHds3fUQ

Pharmaceutical companies have long complained about how complicated it is to get medicines approved in Africa and how long it takes – particularly in comparison to Europe, which processes applications via a  central European Medicines Agency (EMA).

A significant number of African countries’ national medicine regulatory authorities are under-resourced and lacking in expertise.

Greg Perry, Assistant Director-General of the International Federation of Pharmaceutical Manufacturers and Associations (IFPMA), welcomed the landmark moment where the treaty has now come into force, describing it as “one step closer to achieving a continent-wide regulatory agency”.

“We look forward to the full implementation of the AMA, which will be a game-changer for all Africans to access safe, effective and quality medical products in a timely manner,” said Perry.