As the world’s eyes are fixed on the pending roll-out of new Covid-19 vaccines, a team of 120 leading health and climate experts have called on global leaders to use the momentum of the pandemic response to accelerate climate action, just ahead of the five-year anniversary of the landmark Paris Agreement to limit global warming to “well below 2°C.”

The expert assessments were summarised in the 2020 Lancet Countdown on Health and Climate Change, released Thursday. The report finds that record heat waves and wildfires in Australia, North America and Europe, deadly dengue expansion across Latin America; and undernutrition, floods, and droughts in China, South East Asia and Africa, are creating unprecedented threats to health and wellbeing around the globe.

Despite their gloomy assessment, other climate news suggests that there is still time for a global reset. Should China, Japan, South Korea and others deliver on recently-announced net zero emission targets, the 2015 Paris Agreement’s ambitious climate goals could be “within reach”, according to an analysis by the Berlin-based Climate Action Tracker, published on Tuesday.

“The Climate Action Tracker (CAT) has calculated that global warming by 2100 could be as low as 2.1°C as a result of all the net zero pledges announced as of November 2020,” stated the independent scientific group, which measures and models governments’ climate pledges and actions against the goals of the 2015 Paris Agreement.

A recent wave of “net zero” emissions pledges announced this autumn by China, South Africa, Japan, the Republic of Korea and Canada have even “put the Paris Agreement’s 1.5°C temperature limit within striking distance,” states the latest report of the Climate Action Tracker (CAT).

As of November 2020, 127 countries “are considering or have adopted” net zero targets, the group said. Together, those account for some 63 per cent of global emissions. In addition, the incoming US administration of president-elect Joe Biden has pledged to rejoin the Paris Agreement and act more aggressively on climate change. Emissions are, nonetheless, still projected to increase until 2030, despite a small dip this year due to the COVID-19 pandemic.

“The year 2020 can be a global leap year for climate neutrality, so that we can reduce global emissions by 45 per cent by 2030, said UN Secretary General Antonio Guterres, speaking at a major address at Columbia University on the state of the planet. He recalled the vital link between climate, environmental stability and human health, saying, “Nature feeds us clothes us, quenches our thirst”, noting that health impacts from degradation come through multiple pathways, urban, air pollution, and environmental degradation: “Sound chemicals management could prevent some 2.6 million deaths per year.” 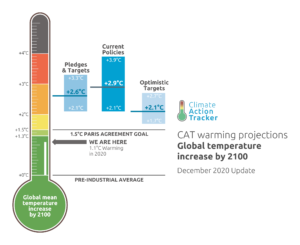 Even so, the 2020 Lancet report underscores how global warming that is already occurring is exacerbating the health impacts of the COVID-19 pandemic and vice versa.  The report, which involved 120 experts from 35 institutions like University College London, the World Health Organization and the World Meteorological Organization, found consistently worsening trends in all 40 global indicators that measured the health, social and economic impacts of climate change, revealing that health systems are still ill-prepared to deal with its deadly repercussions.

“The pandemic has shown us that when health is threatened on a global scale, our economies and ways of life can come to a standstill,” warned Ian Hamilton, executive director of the Lancet Countdown. “The threats to human health are multiplying and intensifying due to climate change, and unless we change course, our healthcare systems are at risk of being overwhelmed in the future.

“With trillions being invested globally in economic support and stimulus there is a genuine opportunity to align the responses to the pandemic and climate change to deliver a triple win – one that improves public health, creates a sustainable economy and protects the environment,” said the World Health Organization’s Maria Neira, who is at the helm of the Organization’s climate change and health efforts.

”But time is short. Failure to tackle these converging crises in tandem will [end up] moving the world’s 1.5C target out of reach and condemning the world to a future of climate-induced health shocks.”

This year’s report is more comprehensive than ever, featuring new indicators to measure the extent of heat-related mortality and its devastating economic costs, among other indicators on migration, urban green spaces and low-carb diets.

The authors show that climate change is knocking on Europe’s doorstep as well, triggering thousands of deaths a year from heat-related shock waves, damaging crop yields of staple grains, and facilitating the spread of mosquito-borne infections like dengue, with devastating costs to societies, healthcare systems and economies that are already strained.

The incentives to tackle climate change together with Covid-19 seem more enticing than ever, as limiting global warming to 1.5°C by 2100 could generate a net global benefit of US$264–610 trillion, which is at least triple the size of the global economy in 2018.

Tackling climate change also bodes well with pandemic preparedness and prevention plans, since human encroachment into wildlife habitats, intensive farming, and deforestation promote both climate change and the emergence of “zoonotic” diseases like COVID-19. In fact, the world doesn’t have the luxury of dealing with one crisis at a time, added Hamilton in a press release on Wednesday night.

To reach the Paris Agreement’s targets by 2030, the world must reduce carbon dioxide emissions by 7.6% every year, which is more than five times higher than current government ambition, found the report. And although such changes seem out of reach, climate change is becoming more expensive to treat every year, given that a five-year delay in action would require a 15·4% reduction in carbon dioxide emissions every year to reach the set targets, representing a ten-fold increase in current government ambition.

Europe, The World’s Most Vulnerable Region To Heat-Related Shock Waves

Perhaps surprisingly, the authors found that in 2018, Europe was the world’s worst affected region by heat-related shock waves, triggering over a 100,000 deaths that year, mostly in older people, people with disabilities or pre-existing medical conditions, as well as those working outdoors or in non-cooled environments. The costs, say the authors, are equal to a whopping 1.2% of regional gross national income.

A rise in temperatures in Europe, even by seemingly small amounts, is also facilitating the spread of infectious diseases like dengue to the region. The global climate suitability for the two main mosquitoes that carry dengue – the Asian tiger and yellow fever mosquitoes – have in fact increased by 41% and 25% since the 1950s, found the report.

Meanwhile, rising temperatures have made Africa’s highlands 40% more suitable for malaria transmission, and 150% more suitable in the Western Pacific region, in comparison with the 1950 baseline.

The outlook for food security is rather bleak as well, with consistently dwindling crop yields for staples like maize, winter wheat, soybean, and rice across the world. In Europe, for instance,  the crop growing season for maize was reduced by 20 days in 2019, a 14% reduction compared to the global averages between 1981–2010.

Increasingly warm temperatures are also triggering huge economic losses. Just last year the world lost 302 billion work hours due to climate change, or 103 billion hours more than two decades ago. These effects are more strongly felt in the construction sector in high-income countries, in comparison to low- and middle-income countries where extreme heats are most deeply felt in agriculture. In 2018, India and Indonesia lost 3.9 to 5.9% of their GDP because of lost outdoor labour. In India alone, this amounts to 100 billion hours of potential work lost to rising temperatures in 2019, compared with those lost in 2000.

If the world fails to intervene, up to 565 million people living in coastal areas, about three quarters of the total European population, may be forced to leave their homes due to rising sea levels.

Progress Welcome, But Only 9% of Countries Have The Funds To Implement Health & Climate Adaptation Plans

Fortunately, there is some good news. Coverage of health and climate change in the media has increased by 96% worldwide between 2018 and 2019, and research in the field has increased by a factor of eight. Government engagement in climate change has also increased, especially for small island states and lower-income countries that have led the trend. And in 2019, government spending on health system adaptation rose by almost 13% to $18·4 billion.

However, governments have a lot of work to do to implement effective multi sectoral strategies, warned the report, noting that governments “remain unable” to fully implement their plans for national health adaptation – even though two thirds of global cities surveyed anticipate climate change to seriously compromise public health infrastructure.

In fact, only half of governments surveyed have drawn up national health and climate change adaptation plans, and only 9% have the necessary funds to fully implement them.

An earlier version of this story was published on Thursday morning in collaboration with Geneva Solutions, a new non-profit Geneva platform for constructive journalism covering International Geneva.