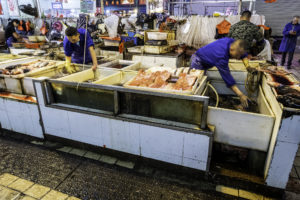 BREAKING – Two members of a 10 person WHO-sponsored mission to China to investigate the origins of the SARS-CoV2 virus were turned away at China’s doorsteps after official approvals that WHO understood to be finalized were held up at the last minute.

One member has turned around and is now returning home, while the second remains stuck in transit in a third country. Eight other members of the team were told to delay their departures altogether, WHO confirmed on Tuesday.

“Over the past 24 hours, members of the international scientific team on COVID-19 virus origins began travelling from their home countries to China,” Dr Tedros Adhanom Ghebreyesus stated at the WHO press briefing. “This was as per arrangements jointly developed between WHO, the Chinese government, and the countries for which the team was meant to travel through,” he clarified. “Today, we learnt that Chinese officials have not yet finalised the necessary permissions for the teams arrival in China.”

Indicating that WHO had instructed the other eight team members who were not yet airborne to cancel their journeys for the time being: “We did not want to put people in the air, unnecessarily if there wasn’t a guarantee of their arrival in China.”

WHO’s executive director of health emergencies, Dr Mike Ryan said that it had become “clear that the necessary approvals had not been gotten, specifically in regards to visa clearances”.

“We were all operating on the understanding that the team will begin deployment today,” and explained that based upon that understanding, two members of the team had already begun travelling yesterday.

Ryan added: “The two colleagues who have been travelling: one has been turned around and has a reasonably short journey home. The other will stay in transit in a third country, awaiting further details.”

Neither he nor Dr Tedros clarified which two team members had actually been in transit when their entry to China was denied.

The WHO officials expressed hopes that the holdups were the result of a “logistic and bureaucratic issue” that could be resolved quickly.

Dispatch of the team has been long-awaited by many WHO member states, after months of delays in the launch of the mission which was mandated by a World Health Assembly resolution in May.

WHO finally named the investigative team in late November. The Organization also published outlines of a Phase 1 and Phase 2 study for the virus origins investigation. In December, WHO officials said that, the team would travel to Wuhan in January.

Speaking at Tuesday’s briefing, however, Dr Tedros said: “I’m very disappointed with this news, given that two members have already begun their journeys and others were not able to travel at the last minute.

“I have been in contact with senior Chinese officials, and I have again made it clear that the mission is a priority for WHO, and the international team have been assured that China is speeding up the internal procedure for the earliest possible deployment.”

The first clusters of human infection with the SARS-CoV2 virus surfaced in Wuhan China in December 2019, around a seafood market that also sold wild animals for slaughter, and it was presumed that these first infections had passed from animals to people working or shopping at the market.

But in the following months, the origins of the first human infections became far less clear. It emerged that some of the people first diagnosed with the virus in Wuhan had not had any contact with the market. The virus has been traced to a family of coronaviruses that circulates naturally in bats in a province of southwestern China, hundreds of miles from Wuhan.

But how and where the virus may have lept to humans remains more of a mystery. Some critics have suggested that it could have escaped in a biosafety failure from a Wuhan virology laboratory where extensive coronavirus research was in fact taking place, however WHO does not list this as one of its leading concerns.

Meanwhile, China’s state-controlled news channel began to construct an alternative narrative, claiming that the virus may not have originated in China at all. Even if the virus did originate outside of the country, WHO has repeatedly insisted that any epidemiological investigation must begin with the first cluster: those found in Wuhan.

Those assigned to the delicate task of discerning the origin of SARS-CoV-2 include prominent public health figures and animal health experts from across WHO’s Member States. Marion Koopmans – the virology professor leading research into the Dutch outbreak on mink farms – and former UK deputy chief medical officer John Watson are both set to travel to Wuhan. Prominent British zoologist Peter Daszak, who has a history researching bat coronaviruses in southeastern China and who is also president of the US Ecohealth Alliance, will also be dispatched.

Daszak will also head The Lancet’s independent COVID-19 Commission Task Force, which some independent experts say might have an even better chance of fully investigating the origins of the coronavirus than the WHO team. If this task force never sets foot in China, it will still have the advantage of not being beholden to Beijing: a powerful actor in WHO’s member state governing body.

Other experts are traveling from Australia, Germany, Japan, The Netherlands, Russia, Japan, Qatar, Viet Nam and the USA.

Along with China’s resistance and WHO’s response, the US administration of outgoing President Donald Trump also created a platform for itself in the dispute, accusing WHO of bias and blaming China for the spread of SARS-CoV-2.

At a November session of the World Health Assembly (WHA), the deputy director of the US Department of Health and Human Services charged that the just-published terms of reference for the investigative team were “not negotiated in a transparent way with all WHO member states”.

Garrett Grigsby then went on to say that the terms failed to fulfill the original WHA mandate, adding that “understanding the origins of COVID-19 through a transparent and inclusive investigation is what must be done” in order to meet that mandate.

WHO officials have said that they are regularly consulting with the missions of other governments in Geneva, and that the study process and findings will be transmitted transparently.

And while the incoming administration of US president-elect Joe Biden may lower the accusatory tone against Beijing, there is building pressure from other European and Western Pacific countries applied to WHO to push harder on the Chinese government.

Whether out of deference to Beijing or a realistic assessment that such action would not achieve anything, Dr Tedros and his team have so far resisted naming and shaming Beijing publicly.

There will be no denying the embarrassment to Beijing of the mid-air turnaround of investigative team members, however.