The World Health Organization (WHO) and member states have an obligation to listen to stakeholders in a “sympathetic and respectful manner” as non-state actors (NSAs) play critical roles in supporting global health work generally – and more immediately addressing COVID-19 and its impacts on communities.

That call was made by Mara Burr, director of multilateral relations at the United States Department of Health and Human Services/Global Affairs, during a first-ever informal meeting between civil society groups, WHO officials and WHO member states ahead of the formal 74th   World Health Assembly, 24 May-1 June.

While civil society groups have expressed fears that novel format of a separate forum for more detailed discussions between NGOs and member states could also undermine their standing at the formal WHA – the presence of some leading WHO donors and member states, such as the United States, Germany and France – in at least some of the sessions  – seemed to indicate that countries are taking the new model seriously.

“WHO needs to ensure it has the ability to engage directly with non state actors, including civil society and the private sector… who can make strong contributions that is vital to any type of success against the pandemic,” said Burr on Tuesday, the first day of the 3-day virtual meeting, adding that it is “critically” important to ensure the participation of so-called “non-state actors” (NSAs) in WHO governing bodies and that such participation be in a “transparent and accountable manner, with an open door” to allow input from all stakeholders, including the private sector.

She underlined how the COVID-19 pandemic has demonstrated the critical role NSA’s and the private sector play, in everything ranging from addressing pandemic fallout at the community level to the development of vaccines and supply chains.

“We all know that the COVID 19 pandemic has worsened inequalities and threatens decades of hard won gains in childhood vaccination coverage, fighting HIV, tuberculosis, malaria, malnutrition, maternal and child mortality sexual and reproductive health and rights, property, and much more.NSAs have played critical roles, not just in addressing the direct effects of COVID-19, but also in focusing on the secondary impacts in communities across the globe.”

Other actors, however, said that they would have liked to have seen greater member state presence – and in all of the sessions – rather than only in two half day sessions – out of the three full days. Although most of the sessions during the three day event are being broadcast publicly, WHO also said it had no list of what civil society and private sector groups, as well as member states, actually had attended the informal sessions.

WHO Reforms, Finance And Other Key Issues Raised

However, in the session on public health emergencies, preparedness and response, in which Member States also were invited on Tuesday, the opening day, leading countries such as US took the opportunity to air preliminary views on the more controversial issues that will come before the full World Health Assembly (WHA) when it meets in just a month’s time.

Those include a proposed “Pandemic treaty” that could strengthen the legal mandates around emergency response; a more sustainable system for WHO finance; vaccine production, distribution and equity; and series of independent reviews both into the functioning of WHO’s own health emergency system, the broader global pandemic response of member states and the functionality of the international health emergency system during the crisis – with recommendations for reform.

“It is very important that member states have the ability to review those reports, in a way that allows us to really digest the information and discuss with member states the way forward,” Burr said.

“I think we are a bit concerned that there are proposals that are presupposing a path forward without allowing the member states to actually have a discussion and determine what path makes the most sense.”

With respect to new resolutions and political instruments such as a treaty, however, her remarks seemed to express some hesitations.

“There are there just not enough hours in the day to negotiate several different instruments at the same time,” she said. “And so we want to make sure the path we choose is the best way forward, based on the overwhelming consensus of the member states. We are analyzing everything. We appreciate all of the inputs, but I think it’s time for us to carefully consider these recommendations before we decide on a way forward.”

During opening remarks earlier in the day, WHO director general Dr Tedros Adhanom Ghebreyesus said the organisation valued the “longstanding and fruitful collaboration” it shared with NSAs in official relations.

“Nongovernmental organizations have been working with WHO since its creation, and continue to play a key role, especially on technical collaboration. Philanthropic foundations have long been strong supporters of WHO’s work, said Tedros, highlighting the support given for the COVID-19 Solidarity Response Fund. In a conciliatory remarks clearly aimed at pharma industry leaders, whom he has repeatedly slammed over past months, Tedros added that “international business associations also provide a vital link between the private sector and WHO in finding common ground in public health goals”.

Jaouad Mahjour, WHO acting Regional Director for the Eastern Mediterranean, said engagement with all NSAs is integral to moving forward on a new global framework for pandemic preparedness and response at the WHA and beyond.

That includes a proposed treaty on pandemic preparedness and response, which gained the support of some 25 global leaders in an open letter launching the WHO initiative just last month.

“The aim would be to garner higher local political commitment to ensure and interconnect the global system to prevent predictable response to epidemic and pandemics,” Mahjour said.

There is currently a group of countries, including the United Kingdom, Germany, France, Indonesia, Kenya, Rwanda, and South Africa, co-sponsoring a draft decision on the treaty at the WHA. The decision would mandate WHO to create an intergovernmental working group to start working through the treaty specifics.

Mahjour stated that civil society’s role in supporting such a treaty would be “most important”:

“We know that community readiness and resilience are essential for effective all hazard approach.”

“But we’re hoping that we go out from this pandemic with strong political commitment, that will protect the world in the future and also the best legacy to our new and future generation.”

Added Gaudenz Silberschmidt, WHO director for health and multilateral partnerships, who moderated portions of the meeting:  “It’s also a call for all of you. It won’t happen on its own. It’s also your intervention and your support which will make a difference.”

At the Tuesday session, WHO referred to the importance of maintaining essential health services – pointing to the role that civil society can plan in supporting that.

The WHO has produced operational guidance to maintain essential health services, determining which services are the ones that “absolutely need to be maintained,” said Sylvie Briand, Director of the Global Infectious Hazard Preparedness Department.

The document recommends practical actions that countries can take at national, subregional, and local levels to reorganize and safely maintain access to high-quality, essential services in the pandemic context.

Essential services include support for chronic diseases such as diabetes, HIV, and reproductive health, and also services that reduce suffering are “extremely important,” Briand added.

Many countries find their health system capacities have been reduced by 50%, leaving their hospitals unable to provide support, noted Altaf Musani, director of health emergency interventions.  The global health workforce currently is suffering from brain drain in many countries, and a displacement of the essential health workforce does not enable refresher training for essential care; lack of accessibility of services in fragile, conflict, and vulnerable settings. 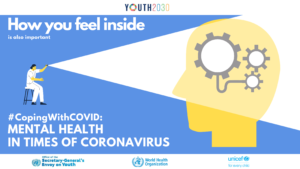 “You cannot do proper community engagement without the youth. It is really important in public health emergencies to include all segments of the population,” said Dr Ibrahima Soce Fall, Assistant Director General, Emergency Response.

Claire Beck, Director Humanitarian health nutrition and WASH, pointed out that health services, especially during humanitarian crises and pandemics, focus on certain life-saving issues for mothers and childrens, but there are more health needs that also need to be addressed as well. “Services are not youth-friendly, she said, “[They] are not open to meet the needs of youth during an emergency – reproductive health needs and listening to concerns they have.”

“It is important that the WHO not only look at the training of health workers in dealing with disease but training them to have a sympathetic and youth-friendly way of working with youth.”

But traditional health practitioners also have an important role to play during this pandemic, said Briand.

“First, they have the trust of the population, [making them] good communication channels]. If they are properly informed and they have the right message, they can help the community to protect themselves. They have a role to play in health as well.”

While Tuesday’s sessions were focused on COVID-19 response and health emergencies more generally, Wednesday and Thursday sessions will trace the steps of the wider range of issues that will also be addressed in May’s formal World Health Assembly.

As part of that, civil society, WHO officials and (in some sessions) member state representatives will look at initiatives to address interpersonal violence; expand access to medicines, vaccines and treatment for rare diseases, and increase transparency around medicines markets; address health workforce issues; and create a framework for more sustainable finance for WHO.