The United States on Tuesday gave conditional praise for the “progress made” by an independent oversight committee examining the response of the WHO’s Health Emergencies Programme to the COVID-19 pandemic – asking for more updates in November and early 2021.

The report by the Independent Oversight and Advisory Committee (IOAC) to WHO’s Health Emergencies operations is was one of three reports heard by the EB at Tuesday’s meeting on various aspects of the WHO organizational and global pandemic response.

One of the key findings of the IOAC interim report, however, was that the “politicization of the pandemic response is a material impediment to defeating the virus.”

And indeed it seemed as though the member states were already taking that piece of advice to heart.

While the last Executive Board meeting in May saw significant geopolitical tensions emerge between the United States and China over who was most at fault for the expansion of the pandemic, this meeting remained sober and substantive – with both sides dialing down their remarks.

And after months of blithering White House criticism of the WHO, the conditional endorsement of the inpendent review, still underway, seemed to indicate that Washington was well along the path to remaining within the Organization, despite US President Donald Trump’s announcement in July that the US was withdrawing.

“We appreciate the progress made,” said US Deputy Secretary of Health and Human Services Brett Giroir, asking that EB members be briefed again in November and early 2021 “so we can engage in substantive discussions about how best to address the challenges and issues identified.”

Key findings of the report were that despite WHO’s declaration of a global public health emergency (PHEIC), response among member states was inconsistent and delayed.  Key gaps also emerged in national preparedness strategies, further hampering rapid mobilization. And the overall level of COVID-19 data reporting, “needs furhter improvement in terms of speed, consistency, and completeness.

While the committee also found that WHO acted within the legal frameworks that is currently has available, key WHO EB members suggested that those need to be strengthened.

Significantly, Germany speaking on behalf of the European Union bloc said member states need to consider “strengthening WHO’s perogative in terms of access to information” and urged the three panels that are now exploring the pandemic response from various angles: “do not to be afraid to tell uncomfortable truths.

“In your recommendations, do not be afraid to challenge all as member states to question current modes of operation and to show boldness and vision. You can count on the full support of the EU and its member states states,” said Björn Kümmel, Germany’s EB representative, to review panel members.

That EU statement, coming after months of heavy US criticism of Beijing, for allegedly withholding vital information on the emergence of a mysterious virus in Wuhan, China in late 2019, is highly significant – as it represents the diplomatic backing Washington may receive for rules changes that require  greater transparency among member states, when it comes to reporting on emerging infection threats.  Along with EU member states, Japan and Australia as well as the United Kingdom have also voiced criticism of Beijing’s handling of the pandemic in the past.

Germany also suggested that the addition of an “intermediate level” of alert that would be short of a full-fledged global public health emergency.

“We support considering the long standing idea of creating an intermediate level of alert. But we need the expertise of the Secretariat and of the evaluation groups regarding its definition, the consequences that will be attached to its activation, and the possible process for its implementation,”  Kümmel, added, also speaking on behalf of the European Union bloc.

“We look forward to discussing ideas such as increased accountability of member states on preparedness, for example, through the establishment of a periodic review mechanism, as proposed by the African Union, and all strengthening WHO’s prerogatives in terms of access to information.

“Emphasis must also be placed on development of proper and unified health data collection at all levels,” Kümmel added.

The United Kingdom, meanwhile, said that the team leading a second review, The Independent Panel (IPPR), which is examining both national and WHO response, should add a scientific advisory panel to structure.

“Given the potentially unlimited amount of quantitative and qualitative information available to the panel, we believe a scientific advisory group will be a beneficial addition to your structure,” said the UK’s representative Chris Whitty. “It would ensure that the advice given to the Co-chairs and the panel is fully independent and impartial, capturing the best evidence available.

“It would streamline and speed up the collection and analysis of evidence enabling the development of a comprehensive pace to inform your reviews output, and it will provide the co-chairs and panel with consistent advice over the entire course of review, covering the range of necessary technical expertise, including for example, as mentioned by others, human health, animal health, behavioural science, organisational change and modelling and forecasting.”

The meeting was not without its flashpoints, however couched they were in diplomatic language.

Russia complained about geographic imbalance in the makeup of a second review committee, the Independent Panel, which was mandated by the last World Health Assembly in May to take a broad look at both the WHO and national response to the pandemic.  The 13 member Panel chaired by former New Zealand Prime Minister Helen Clark and former Liberian Prime Minister Helen Johnson Sirleaf,  includes members from all WHO regions.

However,  Minister of Health Mikhail Albertovič Murashko, Russia’s EB representative, maintained nonetheless that the reprsentation on the panel was lopsided.  “As we see it, it’s important to take a balanced approach, and sadly, within the IPPR at present we do not see a balanced situation because there is one whole geographical region that is not represented at all, and if you consider the fact that this region represents a very significant proportion of the world’s population, that is a serious imbalance.”

Yet a third review committee is examining the functioning of the International Health Regulations, which form the legally binding framework under which countries report about health emergencies and WHO’s shapes its guidance and response.

China reacted in a muted way to the reports. It said it hoped the reviews would enhance the ability of WHO and the international community to “take more targeted measures to further support countries with weak health systems.”

China’s EB representative, Zhang Yang, also called upon the review panels to “inform members states of their work in a timely manner and use their platforms to enhance direction with member states.”

WHO Provides Extensive Review of COVID-19 Pandemic Response To Date 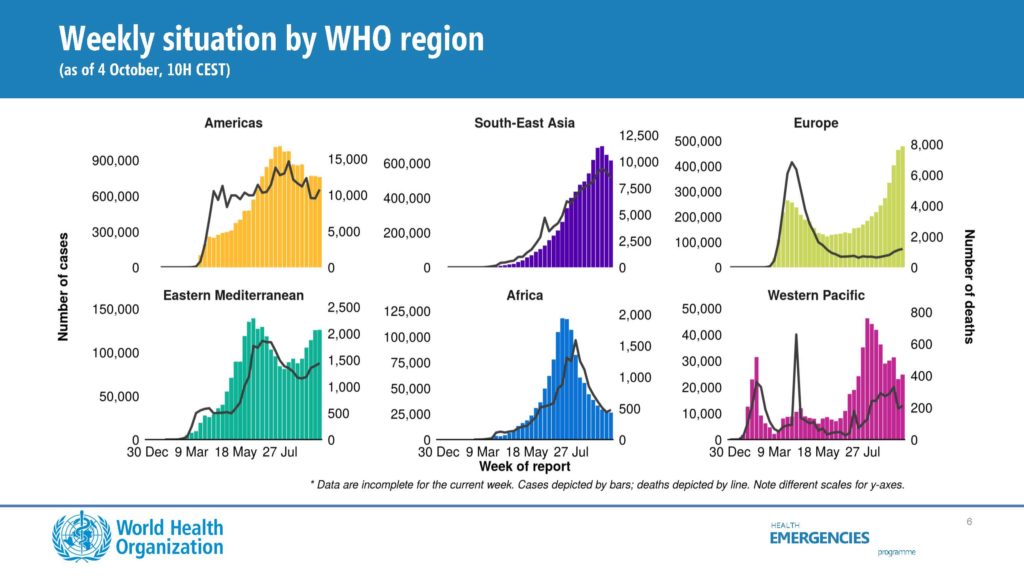 The debate over WHO’s performance followed an extensive review by WHO of the state of the pandemic and its response to date – including everything from the direct distribution of emergency supplies to the massive WHO “Solidarity Trial” for new tests, drugs and other health products involving research in dozens of countries; laboratory capacity-building; and the creation of the COVAX vaccine pool,  which 168 countries have joined so far.

The review illustrated the volatile nature of the pandemic in terms of its geographic impacts – but also included somebright spots including strikingly lower case and death counts in the African region, and the beginnings of decline in South-East Asia.  This, as cases in WHO’s European region were seeing a significant rise. 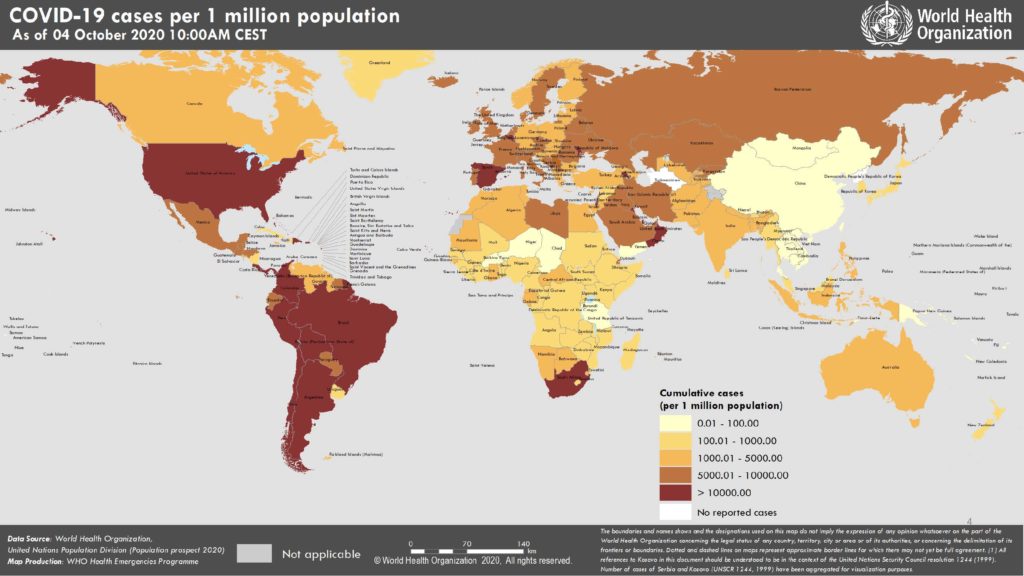 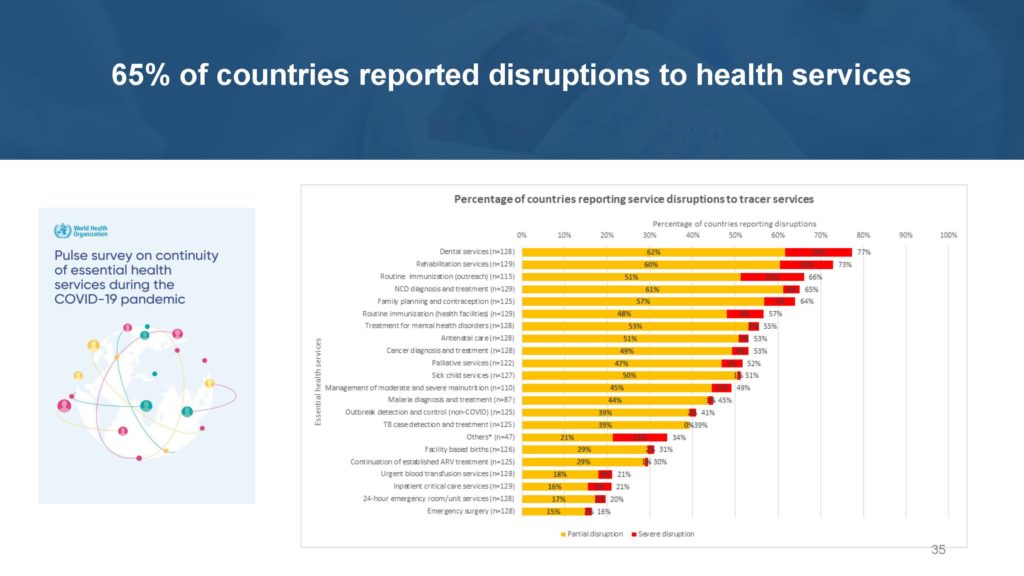