Proposals to incorporate some 40 new medications in WHO’s Essential Medicines List – from complex cancer treatments to new medicines for hepatitis C and rabies – will be examined over the coming two weeks by the EML Expert Committee.

The Committee, which kicked off its deliberations on Monday with a public hearing, also will consider revised or amended recommendations on some 16 treatment indications. Those include recommendations to incorporate new childhood medicines for treatment of cancer, antibiotics for use in neonatal meningitis and intra-abdominal infections.

But there is also a recommendation against the use of antibiotics in most cases of acute bronchitis among healthy people – one of a number measures under consideration as part of the progressive WHO drive to make more rational use of antibiotics and fight antimicrobial resistance.

Strikingly, COVID drugs are one issue not on the EML agenda, said Benedikt Huttner, Secretary of the Expert Committee, at the outset of the public session. Rather, a separate WHO process is being devoted to the consideration of guidelines on essential COVID treatments – although certain COVID diagnostics are being considered by the EML expert group for inclusion in a related Essential Diagnostics List (EDL).

Monday’s wide-ranging public session saw detailed presentations by two dozen experts and civil society groups on issues ranging from the highly technical to the politics of medicines access – with the two often deeply intertwined. The EML is used as a baseline reference point for national governments and insurance providers in considering medicines to prioritize in health systems and services.  Final recommendations from the Committee for 2021 updates to the EML  are expected in August.

Mike Sharland, chair of the EML Working Group on Antibiotics focused on the delicate choices facing the committee in terms of ensuring access to essential antibiotics – while rationalizing use to stem the tide of drug resistant pathogens – also known as antimicrobial resistance (AMR).

A key WHO aim is to ensure wider access to the most basic life-saving antibiotics in parts of the world where vital drugs may not be widely available – while reserving certain classes of antibiotics for treating more resistant bacterial infections, said Mike Sharland, Chair of the EML Antibiotics Working Group, and a professor at St. George’s University of London.

Those more sensitive drugs are typically “broad spectrum”  antibiotics that are on special WHO “Watch” and “Reserve” lists, which indicates that they should be used in only specific, limited indications or when all other treatments have failed. In contrast, antibiotics listed on the WHO’s “Access” list can and should be used more widely for common bacterial infections. The three-tiered system, known as “AWaRe” was developed by WHO in 2017. 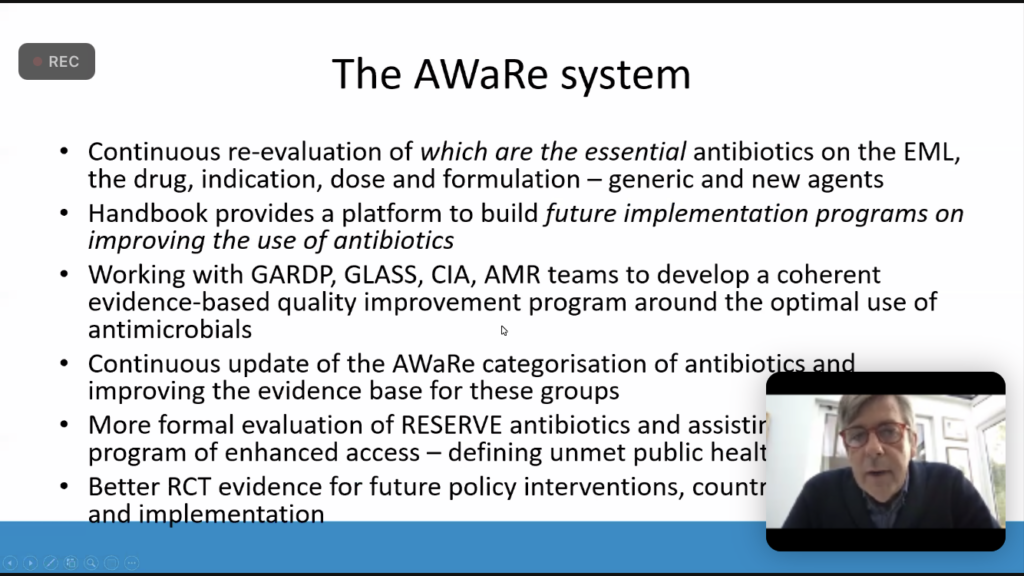 This year’s recommendations include provisions that the Essential Medicines List recommendations can be used to discourage inappropriate antibiotic use for many forms of “milder” illness among patients who are “not ill with underlying disease”, he added.

This, in line with the WHO goal that some 60% of antibiotics used at country level by 2023 should belong to the WHO “Access” group.

One new draft EML recommendation under consideration would nix the use of antibiotics at all for acute bronchitis among otherwise healthy children – unless there is “clear evidence for, or a strong suspicion of a secondary bacterial infection.”

This, as Sharland said, comes as part of a wider effort by the EML to “think about… whether it’s clinically appropriate” to recommend antibiotics at all for some conditions.

The Dilemma of Cancer Medicines – Effective but Expensive

This year’s EML expert group had received proposals for the inclusion of 16 new cancer drugs as well as 6 new indications in the EML basket, said Elisabeth de Vries, chair of the WHO EML Working Group on Cancer Medicines, Notably, six of the 23 submissions were for children’s cancer drugs.

A key concern of the committee in this year’s expert reviews has been the affordability of many of the new cancer treatments – in which newer and more effective treatments are often be far beyond the range of many low- and middle-income countries to pay, said De Vries, who also chairs the cancer medicines committee of the European Society of Medical Oncology.

This, she noted, comes against a landscape in which the number of new cancer patients is expected to increase from 19.3 million to some 30 million by 2040 – and cancer mortality remains significantly higher in low- and middle-income countries of the world.

She called out monoclonal antibodies in particular – for which there are now 41 US-FDA approved treatments for cancer indications – as “difficult to produce and they’re very expensive.”

The challenges faced by the EML in recommending new cancer treatments are symptomatic of a broader dilemma, stressed civil society groups in a series of follow-up presentations.

And in light of those challenges of efficacy versus cost, the WHO Essential Medicines List, first conceived in the 1970s as a guidance for national governments, needs to be “completely re-evaluated”, contended Knowledge Ecology International’s Kavian Kulasabanathan.

“Today the EML often plays a negative role in debates over access to medicines,” said Kulasabanathan. “The low number of patented medications on the EML is frequently cited as demonstrative that patents are not a barrier to global access to essential medicines. It is not surprising that many patients and patient advocates chafe at the paucity of newer drugs on the EML as a result of this policy tension.

He called for the creation of a list for drugs that are “medically essential, but face challenges regarding affordability,” reviving a proposal pitched in past years to the EML expert committee, which last met in 2019.

“KEI’s position is that the earlier framework for the EML needs to be completely re-evaluated, to take into account changes in the health infrastructure worldwide, the disparity of resources between developing countries, scientific progress, and new global norms to “promote access to medicines for all…..

“”The WHO Expert Committee has been asked, several times, to create a category in the EML for products that would be essential, if available at affordable prices. A pathway for affordable antineoplastics would expand treatment options for patients, including the inclusion of second-line treatments….

“If drugs are medically effective, but expensive, they should be placed in an EML category for drugs that are medically essential but face challenges regarding affordability. Governments and patients would take this as a signal to implement policies to make these medically effective therapies affordable. A system of WHO guidance that consistently ignores or excludes new drugs for cancer needs to be reformed, and new options for dealing with affordability and access are needed if we are serious about achieving equality of health outcomes.” 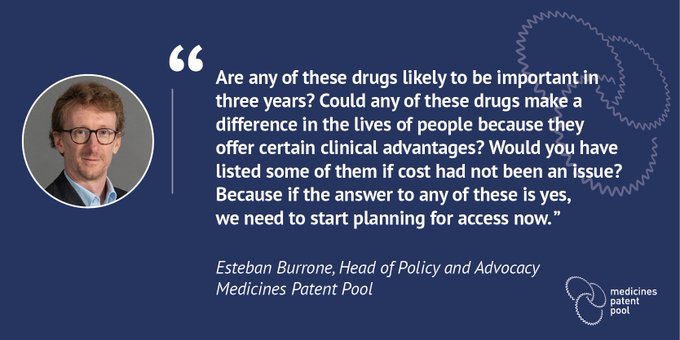 Another way tht the EML could use its leverage would be to identify promising new treatments earlier on  – and then demanding more detailed data on costs and access which can help drive voluntary deals with manufacturers, added Esteban Burrone, head of policy and advocacy at the Medicines Patents Pool, which negotiates voluntary licenses with industry for the manufacture of vital drugs in low- and middle-income countries.

“Over the years, I have repeatedly heard the frustration from members of this Committee or other stakeholders: a medicine gets listed on the WHO EML, but access to that drug continues to be limited in LMICs, causing unacceptable morbidity or mortality.  I would like to state that it doesn’t have to be that way.  We can plan for future access now,” Burrone said.

“If the Committee decides not to list them [a promising drug] for now and asks for further data, will it also make an ask on cost?  Will it recommend what needs to happen so that these clinically important medicines can become widely available and cost-effective in LMICs?” he asked, citing the case of the HIV drug dolutegravir – in which MPP, supported by WHO, negotiated a manufacturing license for a generic version only a year after the patented drug was first approved by the FDA.

“Will it be forward looking, as WHO was in the case of dolutegravir?  If you would like to see affordable generic versions being developed for use in LMICs, you can contribute to making that happen.

“You can ask for it and give a mandate to WHO and other stakeholders to make that happen,” he said, adding that MPP stands ready to support such efforts through its voluntary license model – and demonstrated track record with opening up access to lifesaving hepatitis and HIV medicines for millions of people in the developing world.

🎙️MPP's @eburrone is addressing the @WHO Expert Committee on Selection&Use of #EssentialMedicines:
✅important to plan for access NOW through early identification of promising new treatments
✅MPP is ready to support future access to promising new meds through our licensing model pic.twitter.com/Ml3EzsPTm5

On the other side of the fence, Sara Amini of the International Federation for Pharmaceutical Manufacturers and Associations (IFPMA), argued that while the WHO Essential Medicines List can be a “useful tool” guiding drug choices by countries and procurement agencies – it should not be portrayed as the final word on treatment choices by health-care providers.

“IFPMA recognizes EML’s value as a foundational list of medicines that meets the priority healthcare needs of health systems and their populations,” Amini stated, “However, such decisions, while guided by EML, should also reflect each nation’s unique health landscape, taking into account national disease burden, health system capacities, and socio-cultural characteristics of the population.

“As such, the EML should not be used as an impediment for governments, healthcare professionals or patients to adopt other treatment options, which may not be listed on the EML, but are deemed appropriate at a national level.”

Another issue of concern for industry, Amini added, remains the WHO’s recommendations for the use of  “biosimilar” versions of patented biological medicine treatments – often seen in the cancer arena as well as in other noncommunicable disease treatments.

She said that the EML expert group should develop more refined terms of reference to such drugs in the EML context, including more precise definitions of what constitutes biologically equivalent drug formulations of certain biologically-based medications.

EML recommendations for leading anti-cancer drugs, or their biosimilars, such as rituximab (RituxanⓇ)  and trastuzumab (HerceptinⓇ) should also contain better definitions as to what constitutes a “quality-assured biosimilar”, she contended.

Those definitions, Amini said, would be made in line with “WHO’s commitment to supporting globally acceptable principles for licensing biological products that are claimed to be similar to biological products of assured quality, safety, and efficacy on the basis of proven similarity.”