In words that echoed warnings from European officials last week, Dr Tedros and WHO’s health emergencies team stressed that governments need to double down on testing, contact-tracing and quarantine measures – before surges overwhelm health systems – potentially leading to death rates like those seen in the first wave of the spring.

“It’s important that all governments focus on the fundamentals that helped to break the chains of transmission and save both lives and livelihoods,” Tedros said at the press briefing.

“This means active case finding, cluster investigations, isolating all cases, quarantining contacts, ensuring good clinical care, supporting and protecting health workers and protecting the vulnerable. We are in this for the long haul. But there is hope, that if we make smart choices together, we can keep cases down. Ensure essential services continue and children can still go to school. We all have a part to play.

Dr Tedros said he was “encouraged” by the measures that some governments are taking – most of northern Europe has responded by clamping on night-time curfews, limited lockdowns, closures of restaurants and businesses, and the imposition of stricter limits on public and private gatherings.

But the WHO Director General also he warned that public “fatigue” was also a worry – without widespread adherence to rules about masks, social distancing and hand sanitation – trends could continue to escalate out of control.

“The virus has shown that when we lead our guard down, it can surge back at breakneck speed,” Dr Tedros said.

‘Europe and Others Will Experience ‘High Numbers of Cases; Many Countries Not Doing Enough For Contact Tracing and Quarantine 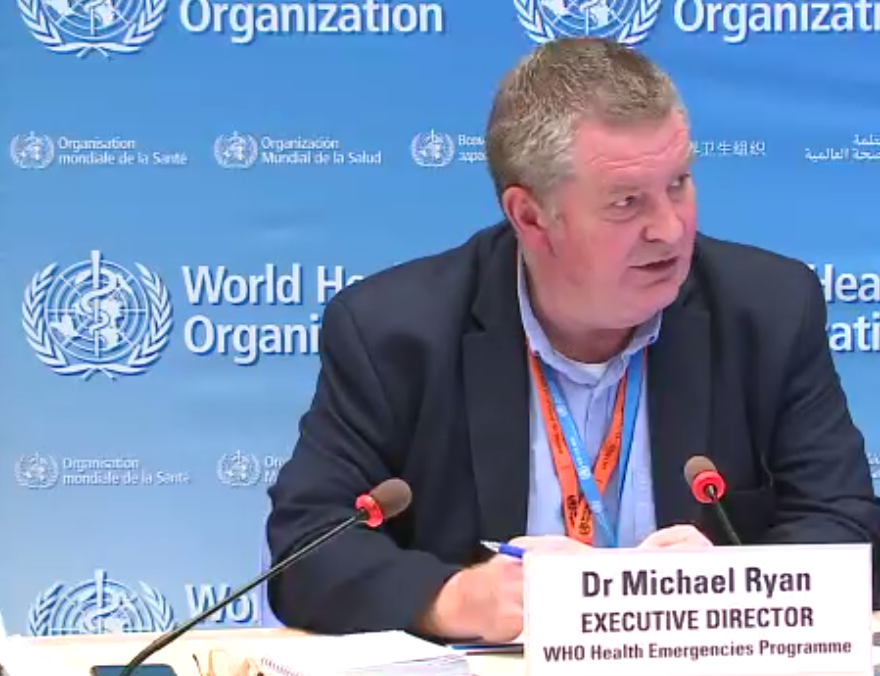 Worldwide trends remain volatile, said Health Emergencies Executive Director Mike Ryan. But particularlyin regions where infections are now surging, many countries are not following through enough on contact tracing and quarantine  measures – even after they set out restrictions, he observed.  He warned of  “high numbers of cases” ahead.

“People are tired, as we move into the next few weeks, Europe and others will experience high numbers of cases,” he said.  “We must protect the vulnerable, we must protect the health system, we must try to keep our kids in school, but potentially be willing to give up some of the things we love to do. And we must test, test test, and reinforcing quarantine and isolation.”

He said the follow-through on testing and tracing and quarantining has been one thing setting apart countries that succeeded in containing outbreaks from those that have not.

“Many Asian countries, not only just China, but others in east Asia and also Australia, have managed to crush transmission and keep it down,” he noted, drawing a contrast between trends in Asia and Europe or North America.

“The things they had in common were tracking cases and quarantining contacts. The success that countries had in Asia was in their ability to find those [infected] people and continue doing that. Serious follow through, they ran through the finish line and beyond because they knew the race wasn’t over. Too many countries put an imaginary finish line – and then stopped.”.

At the same time, health systems have become better at coping with seriously ill cases, she said. And that is reassuring: .

“Everyone, everywhere, is better prepared at dealing with severe patients. Health systems check oxygen levels right away; that saves lives.  There is dexamethasone, which is widely available all over the world. We are not in the same position, we know a lot more. Now is the time to be really strategic and smart about these interventions.””

Meanwhile, WHO’s Chief Scientist Soumya Swaminathan said that she was not “unduly alarmed” over the delays in some vaccine and medicines trials being seen recently.

She was speaking in the wake of an announcement last week by Johnson & Johnson that it was temporarily suspending its one-dose vaccine trial after an unexpected illness in one participant.  The pharma firm Eli Lilly also suspended its trial of an antibody cocktail after an adverse event – the potential treatment had received a great deal of hype after US President Donald Trump received a similar preparation.

“We should stay hopeful and optimistic,” said Swaminathan, about the trials. “These are things that happen in clinical trials but they are getting more attention now now that they are under the spotlight.

“Overall we have  45 candidates now in Phase 3 trials,” said Swaminathan, adding that the good news is that some of the vaccines seem to be provoking immune response in older people who are among the most vulnerable.

“Some of the vaccines now are showing very good immunogencity for older people – and that is important because older people are a high risk group and we hope it would be possible to protect them with a vaccine,” she said.

On another positive note, Dr Tedros said that some 184 countries have now committed to the WHO co-sponsored COVAX vaccine facility, including Ecuador and Uruguay as among the latest to join.

With buy in from high income countries – as well as low-income donor dependent nations, the facility aims to foster a more systematic and equitable system to get the first available vaccine doses to the most needy parts of the world’s population, including health workers, older people and people with pre-existing conditions.

The facility has, however, also been criticized by medicine advocates who say that the procurement pool hasn’t stopped rich countries from making huge pre-purchase orders for more than one-half of anticipated vaccine stocks that are likely to become available in 2021 – after the first vaccines in final Phase 3 clinical trials are approved as safe and effective.

Critics, who grouped around a proposal for a patent “waiver” on all COVID related therapie, that was debated at the World Trade Organization last Friday, have also noted that the COVAX facility fails to address the other equipment and medicines needs of low and middle-income countries. A parallel WHO effort to create an “intellectual property pool” for needed COVID therapies – C-TAP – aimed at easing access to products that are still under patent, has not really gotten off the ground.

Tedros made no reference to the criticism of COVAX or the slow progress on the parallel WHO C-TAP initiative, saying only: “equitably sharing vaccines is the fastest way to safeguard high risk communities. Stabilize health systems and drive a truly global economic recovery.

“As winter comes we know that the next few months will be tough, but by working together today and sharing life saving health supplies globally including personal protective equipment, supplies of oxygen dexamethasone and vaccines, when they are proven to be safe and effective.

Referring to the new WHO partnership with Kim Sledge and The World We Want,  to produce a global version of her hit cover “We Are Family,” which was announced by WHO on Monday, Tedros added, “ ‘We are Family’ is more than a song. It’s a call for collaboration and kindness. To heal the world form this pandemic, we must come together like never before in national unity and global solidarity. We are family as humankind – we have more in common with one another than we would ever dare to believe.”