Ahead of a critical G20 meeting this weekend, WHO and its partners are asking the world’s leading industrialized nations  to come up with another US$ 23.4 billion over the course of the coming year to address stark shortages in COVID vaccines, tests and treatments remain dismally low in Africa and other parts of the developing world.

The new strategy for the “Act Accelerator” initiative that is funding and distributing  vaccines, tests and treatments to about 92 low- and middle-income nations, comes against the background of a continuing death toll of some 45,000 to 50,000 deaths  a week, said WHO and other leaders of the Act-A  in two separate press conferences Wednesday and Thursday.

“While the world is now producing some 1.15 billion vaccine doses per month, vaccination coverage still ranges from 1 – 70%,” said Carl Bildt, WHO Special Envoy for the ACT-Accelerator, in a press briefing about the new ACT-A strategy on Wednesday, developed by the steering group of leading the consortium, which includes, WHO; UNICEF; the Global Fund; Gavi, The Vaccine Alliance; the Wellcome Trust, the Foundation for Innovative New Diagnostics (FIND), and the Oslo-based CEPI, which is funding vaccine R&D. 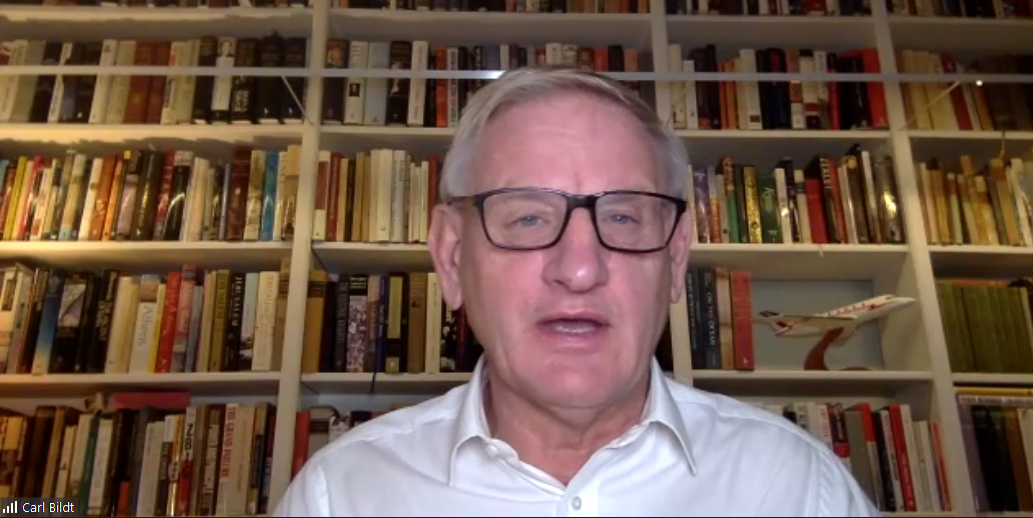 Against that background, “the disease will continue in countries with very low vaccination coverage, and variants will continue to develop,” he said, adding that along with the constantly  mounting death toll, “this is going to come back and affect everyone.”

Today, WHO’s Africa office announced that just five out of Africa’s 54 WHO member states would meet the WHO goal to vaccinate 40% of its population by the end of 2021 (see related Health Policy Watch story).

Speaking at a WHO press briefing on Thursday, WHO’s Dr Tedros Adhanom Ghebreyesus made a special appeal to G-20 nations to come through on promised vaccine donations  – which so far have fallen far short of earlier commitments.  He also called upon G-20 countries to support moves towards a Pandemic Treaty as well as the creation of a new “Global Health Threats Council”.

“I have three requests for the G20 leaders,” said Tedros speaking at a press conference on Thursday,

Dr Tedros’ remarks on a “Global Health Threats Financing Board” effectively combines two separate proposals that emerged from an Independent Panel report on pandemic preparedness and a more recent pan-European Commission on Pandemic Preparedness, which had suggested that a global board to more squarely address health finance issues could be useful.

Added senior WHO Advisor, Bruce Aylward, “Some 82 countries are at risk of not reaching the 40% goals, only because a lack of vaccine supply. They can meet it [the goal] if the supply is there. They only need another 550 million doses through the COVAX initiative.  So the big question to the G-20 is: are they going to say where those 550 million doses are going to come from? Because those 20 countries control the global vaccine supply between now and the end of this year, we are going to make about 3 billion doses of this vaccines. Can we take about ten days worth and see that it goes into COVAX.

“This is a solvable problem, it is a question of political will and the manufacturers.. It’s a test of global solidarity.”

Millions more deaths could be averted

Without global vaccine and treatments access, “We will not be able to achieve true economic and social recovery” added Norway’s new prime minister, Jonas Gahr Store, who made a guest appearance at the WHO briefing.  Getting more vaccines to Africa and elsewhere could lead to “millions more deaths that could be averted” he said, referring to WHO estimate that reaching it’s vaccination coverage goals could save up to 5 million lives over the course of the next year.

“As long as some people remain are exposed and vulnerable, we all are – in this globalized world,” Store added.

The extreme shortage of COVID tests in the same countries that lack vaccines, is one of the other, more hidden crises associated with the ongoing pandemic, pointed out Bill Rodriguez, CEO FIND at the Wednesday press briefing.

“Roughly 3.5 billion tests for COVID-19 have been administered,” he said, “however less than 0.4% of tests have been performed in low income countries,” he pointed out.

Among groups that aren’t vaccinated, it’s critical to roll our more tests in order to be able to rapidly target treatments to people that are infected – from vital oxygen supplies for the seriously ill to the first-ever COVID anti-viral pill, molnupiravir, that appears set to receive US Food and Drug Administration approval soon.

Recent clinical trials have suggested that the drug reduces by 50% the risks of hospitalization and death among people who are mildly to moderately ill. And Merck, the developer of the treatment, has agreed to allow a generic version of the pill to be manufactured and distributed across most of the developing world.

But in order to even administer such a treatment effectively, people have to be tested to determine if they are ill with COVID – or something else, noted Rodriguez.

And that is just not happening today in low-income countries.

“Testing is also critical to be able to do [genetic] sequencing to identify new variants,” he added, noting those variants threaten to bite back at already vaccinated high-income countries.

To address the testing crisis, the new ACT strategy asks for some $7 billion more in funding for test kits – most of which would be invested in the procurement of rapid tests.

“We want to try to reach a minimum target of administering one test per 1,000 people per day,” he said, referrring to the new ACT testing strategy. “To reach these targets we will need to test six times as many people as we have been doing in the past six months.  And even if we do, we will still be testing at less than half the minimum rate as in high income countries.”