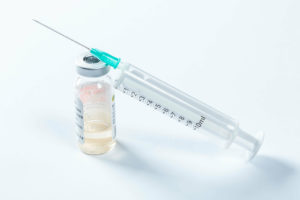 Only five African countries are likely to reach a WHO global goal of vaccinating 40% of their populations by the end of the year, and the continent’s roll-outs may be slowed further by a global shortage of the syringes need to administer vaccines.

UNICEF has reported an imminent shortfall of up to 2.2 billion syringes for COVID-19 vaccination and routine immunization in the coming year, according to the World Health Organization’s (WHO) Africa region.

This includes special 0.3ml syringes needed for the Pfizer-BioNTech COVID-19 doses, for which there is no global stockpile.

“Early next year COVID-19 vaccines will start pouring into Africa, but a scarcity of syringes could paralyse progress,” WHO Africa Director Dr Matshidiso Moeti told a press briefing on Thursday.

“Drastic measures must be taken to boost syringe production, fast. Countless African lives depend on it.”

COVAX is trying to secure deals with syringe manufacturers, and through better planning to avoid deliveries outpacing the supply of syringes, the WHO reported.

Only 6% of Africans – 77 million people – are fully vaccinated, while over 70% of high-income countries have already vaccinated more than 40% of their people.

Three African countries – Seychelles, Mauritius and Morocco – have already vaccinated over 40% of their people, while only Tunisia and Cabo Verde are on track to reach this global WHO target by year-end.

While COVAX has delivered around 50 million vaccines to Africa, the continent still faces a 275 million dose shortfall in order to vaccinate 40% of all Africans.

Dr John Nkengasong, Director of the Africa Centers for Disease Control and Prevention (CDC), told an earlier media briefing that 82% of the continent had experienced a third wave of COVID, while seven countries had already had a fourth wave.

“We are going to go from wave to wave unless we address the question of vaccinations,” said Nkengasong.

While cases in most of Africa are going down, cases are rising in countries in the Central African countries of Gabon, Congo, Cameroon, as well as Egypt.

COVID deaths in Nigeria increased by 66% and by 36% in Egypt, added Nkengasong.

Meanwhile, the WHO urged countries to improve their vaccine roll-out readiness. Some 42% of countries have not yet completed district-level plans for their campaigns, while nearly 40% have not yet undertaken “intra-action reviews” which are key to refining and improving their vaccination campaigns,” according to the WHO

The WHO is conducting emergency support missions to five African countries to help support, speed up and improve their COVID-19 vaccine rollouts, with plans for missions to another 10 countries this year.