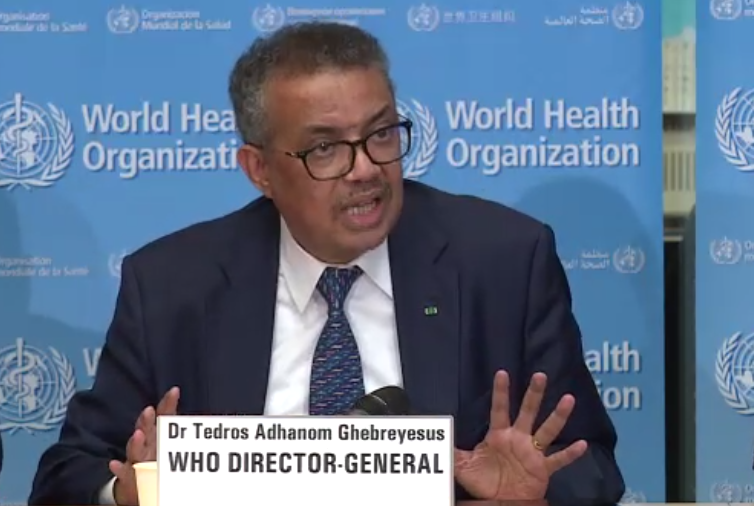 WHO Director General Dr Tedros Adhanom Ghebreyesus urged countries to redouble their efforts on COVID-19 containment, saying that China’s stunning success shows that goal still may be attainable – even as 16,470 new cases of the fatal virus mushroomed elsewhere across the globe in the past 24 hours.

“This not a drill. This is not the time to give up. This is a time for pulling out all the stops….. We need to fight, we need to fight now,” said the WHO Director General. “Our predictions will come true, if we do nothing.”

“This is not a one way street,” he said, “The epidemic can be pushed back.”

Against the almost dizzying spiral of cases abroad, China saw only 143 new cases over the last 24 hours, and only 4 new cases outside of Hubei Province, Dr Tedros noted, citing it as proof that containment actions can work.

In remarks that alternated between a plea and a call to battle, the WHO Director General appealed to the global community to “not give up on a containment strategy,” saying that not only China but also other countries that seemed to be beseiged by the virus threat, had pushed back aggressively and demonstrated that it could be contained.

Korea, for instance, was seeing fewer new cases in the past 24 hours than either Italy or Iran, which have only about half as many reported infections. While both Italy and Iran have reported 107 deaths each, Korea, with nearly twice as many cases, has reported only 35 fatalities.  While many factors can explain such a variable, it also points to the likelihood that Korea is identifying cases sooner and getting those infected to treatment more rapidly.

“We see encouraging signs from the Republic of Korea,” said Dr. Tedros. “The number of newly-reported cases appears to be declining, and the cases that are being reported are being identified primarily from known clusters.”

Singapore is another such example he cited.  It was one of the first countries outside of China to discover cluster of local infection transmission  But careful contact tracing and other measures seem to be containing further spread to 117 cases so far, with only 12 new cases were reported over the past week.

“The experience of these countries and of China continues to demonstrate that this is not a one-way street. This epidemic can be pushed back, but only with a collective, coordinated and comprehensive approach that engages the entire machinery of government. We are calling on every country to act with speed, scale and clear-minded determination.

“If countries act aggressively to find, isolate and treat cases, and to trace every contact, they can change the trajectory of this epidemic,” the WHO Director General said. “If we take the approach that there’s nothing we can do, that will quickly become a self-fulfilling prophecy. It’s in our hands.

“The worst thing that can happen to any country or any individual is to give up,” he added. “Don’t give up, don’t surrender. Do everything we can do to contain it.”

“Educate your public, so that people know what the symptoms are and know how to protect themselves and others. Increase your testing capacity. Get your hospitals ready. Ensure essential supplies are available. Train your health workers to identify cases, provide careful and compassionate treatment, and protect themselves from infection.

“If countries act aggressively to find, isolate and treat cases, and to trace every contact, they can change the trajectory of this epidemic.”

In a rare bipartisan display of support for funding on a health issue, the US House of Representatives approved an US$ 8.3 billion package of funding to support emergency coronavirus response, by a 415-2 vote. That should ensure ready approval in the US Senate as well.

The US is so far only reporting 129 COVID-19 cases officially. But some US experts have warned that significant numbers of cases could have passed under the radar during the past three weeks when testing services were inadequate, and protocols too strict to include tests for people with, and who later proved to be infected.  That has led to patterns of surreptitious community transmission in Washington State, with new clusters also emerging in California and now, the New York metropolitan area.

The draft funding bill, now to go before the Senate, includes about $US 7.7 billion in funds to boost vaccine development, R&D on vaccines and drug therapies, build critical stockpiles of hospital devices and health worker protective gear, and provisions that every state would receive at least US$ 4 million in funding.  The package would also liberalize Medicare rules on telehealth, so that people with chronic conditions or minor illness other than COVID-19 could consult health care professionals remotely, removing risks of exposure to the virus at health clinic and hospital waiting rooms.

After intense debate, congressional leaders also agreed to a provision of $US 300 milllion that would be used to reduce the costs of new vaccines along with language in the draft bill stating that, “the Secretary [of Health and Human Services] may take such measures authorized under current law to ensure that vaccines, therapeutics, and diagnostics developed from funds povided in this Act will be affordable in the commercial market.”

The language was supposed to allay fears that any new COVID-19 treatments and vaccines developed with public funds would be affordable to the millions of Americans who lack even the most basic health care insurance to cover drug and vaccine costs.

However, Knowledge Ecology International’s James Love, described the draft language in the billl as “worse than weak”, and said the fine print could even undermine existing authority that the federal government has to intervene in drug markets.

“The use of ‘may’ rather than ‘shall,’ adds no new authority and no new mandate to protect the public from unreasonable, excessive or unaffordability prices,” Love said, in a blog.

He stressed that another sentence, is even more worrisome. It states that: “in carrying out the previous provision the Secretary shall not take actions that delay the development of such products.”

That clause, Love contends, could in fact undermine existing legal authority that the federal government has to use any patent or have any product manufactured “by and for” the federal government in cases of public need. It could also undermine existing government authority to issue so-called “compulsory licenses” to third parties for production of a patented drug or vaccine, even if federal funds supported the drug development.

“The proposed legislation can blow all of these measures up, by preventing the federal government from undertaking any measure that would ‘delay the development of such products,’ ” said Love.  “Companies can claim that ANYTHING that reduces the price reduces incentives to invest in more rapid development, and under this act, and litigate that issue.”