TEL AVIV- New data on over 500,000 Israelis who have been fully vaccinated with two Pfizer jabs shows the vaccine is 93% effective – with no deaths and only 4 severe cases for people who are a week or more after receiving the second dose.

Out of the 523,000 fully vaccinated people studied, 544 were still infected with COVID, but only 15 of those people actually needed hospitalization.

The data, released by the country’s Maccabi Health Fund provider, which has been out front analyzing and releasing trending data, is an encouraging sign for other countries – particularly considering the rapid expansion of the highly infectious “British” variant B.1.1.7 – which has driven record high rates of new infections and severe cases.

Belatedly, new COVID cases as well as serious COVID cases were now finally in slow decline as the impacts of vaccination kicked in on a wide scale. After weeks of hovering at 1,200 cases, the number of people in critical care has finally dropped, albeit slowly, below 1,000 – in the country of 9.3 million people.

“We can say with caution, the magic has started,” tweeted Eran Segal, a scientist at the Weizmann Institute, in early February, when the turnaround first began.

His latest analysis, published Thursday, noted a decrease of 58% in new COVID cases, 44% in hospitalizations, 38% in the number of ill and 40% in mortality, among people over the age of 60 – since the latest wave of the pandemic peaked in mid-January.

As such, it’s a rough indicator for other countries of the proportions of people that will need to be vaccinated to just relieve pressure of overburdened health services.

A preprint study, published this week by Segal and a group of other colleagues on the server Medrxiv.org confirms the same trends and challenges.

Among Israelis 60 years and older, new positive COVID cases and new moderate or severe hospitalized cases both began to decline about three weeks after Israel officially kicked off its massive vaccination campaign in late December. And those declines among older people have continued.

However, among people 0-59, where vaccination rates are much lower, serious cases have climbed steadily in that same period – even after new infections initially dropped a bit and then remained stable. The increase seen in hospitalizations among younger people has been attributed to the more infectious B.1.1.7 variant – which has also been associated with a sharp increase in serious cases in the UK as well as in Israel and the United States. 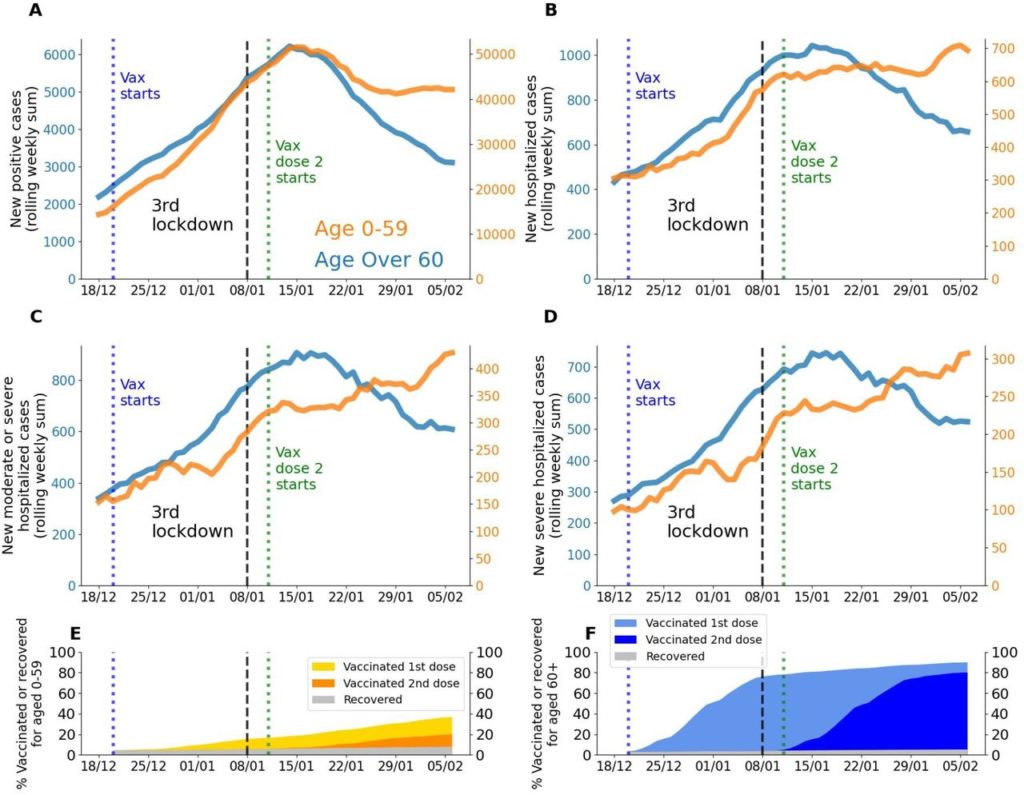 But that very crossing of the lines also suggests the next challenge that will have to be faced – and that is to confront vaccine hesitancy so as to curb the risks of runaway infections in younger age groups.

The 60 y/o and older were first to vaccinate and 91% of them have been infected or vaccinated to date pic.twitter.com/adbHlQE8hx

The issue of vaccine hesitancy has surfaced in Israel almost unexpectedly –  given the eager rush first seen after the vaccines.

While Israel has been primed to vaccinate some 200,000 people a day, demand has slumped around 120,000 vaccines daily. As compared to the long lines seen at the beginning of the campaign, waiting rooms are now standing empty.

That could leave the country falling short of having 60% or more of the countries’ citizens and residents vaccinated by late March.

While authorities are still preaching masking and social distancing, vaccinating the way out of the pandemic is still seen as the major solution – given Israel’s overall high infection rates, large families, and intensity of social contacts, and the failure of lockdowns to restrain mass gatherings for prayer, weddings, funerals and other ritual celebrations.

And so experts worry that such hesitancy could derail the gains now being made – slowing the climb towards real herd immunity.

The hesitant groups have included ultra-orthodox Jews, Arab citizens of Israel, and younger Israelis generally, who may not feel that they are at risk from the virus.

Teachers, who were prioritized to get the vaccine right after people over the age of 60 have not turned out to be vaccinated in the numbers hoped. Health Minister Yuli Edelstein has now begun talking about sanctioning teachers who refuse to get vaccinated – requiring a COVID test every time they enter a classroom. And some other ministers and municipal leaders are talking about barring them altogether.

But authorities are also trying to roll out incentives to get more people immunized.

Those range from organizing Thursday evening “cholent” nights in ultra-Orthodox Bnai Brak – where people can get a free hot meal of the traditional Jewish meat stew if they also take the jab – to “green passports” for travel-hungry secular Israelis to attend sports and cultural events and travel abroad.

Already Israel is building tourism agreements with Greece and Cyprus, based on the free flow of citizens who have been vaccinated. Paradoxically, the airport is currently shut altogether, with only a few “rescue” flights available for returning Israelis – who were never vaccinated, may be infected, and could even return without undergoing a basic COVID test if they can document the reason to an “Exceptions” Committee.

But in the Israeli incarnation, “green passports” would not only be a passport to international travel – but a much broader incentive used domestically. Only people who have been vaccinated – or recovered from COVID – would be able to gain ready entry to crowded sports and cultural events. Despite all of the hype, however, no concrete plan has yet been rolled out. And it remains to be seen how effectively something so complex can be implemented whilst Israel is also in the midst of a national election campaign that will take place in late March.

Of course, civil libertarians have also raised the question of how such preferential treatment of vaccinated groups would work legally – and the extent to which it’s permissible to compel people to undertake an invasive procedure like a vaccine.

However, initial legal opinions have held that while vaccination may not be compelled – there are basic laws as well as legal precedents for incentivizing those who get vaccines – and penalizing those who do not – when not doing so jeopardizes public health.

“Legal experts are rightly concerned about individual liberty when making health-related decisions, but it may not be possible to avoid measures that incentivize young people to be vaccinated. This dilemma will also preoccupy countries that have fewer vaccine doses at their disposal than Israel,” opined Amos Harel in the liberal mass circulation daily Ha’aretz.