CAPE TOWN – The mRNA vaccine ‘hub’ being set up in South Africa aims to have a COVID-19 vaccine candidate ready for clinical trials by 2023.

Meanwhile, the World Health Organization (WHO) – which initiated the South Africa hub to address regional inequity – is setting up a “biomanufacturing workforce training centre” to address the skills shortages in low and middle-income countries that make technology transfer difficult.

This is according to the WHO’s head of technology transfer, Martin Friede, who addressed the first public engagement on the South African tech transfer hub last Friday.

“We have recognised that the lack of a skilled workforce in biomanufacturing is one of the biggest challenges to doing technology transfer into low and middle-income countries, so we will be announcing a biomanufacturing workforce training centre,” said Friede.

This centre will be linked to the WHO Academy, which is in the process of being set up in Lyon in France.

In addition, the WHO aims to set up another technology transfer hub early next year, potentially focusing on viral vectors, he said.

The South African mRNA ‘hub’ will teach African manufacturers how to make mRNA vaccines, like the Pfizer and Moderna COVID-19 vaccines.

Foreign manufacturers will share techniques with local institutions and WHO and partners will bring in production know-how, quality control and will assist with getting necessary licenses.

However, South Africa’s deputy science minister, Buti Manamela, stressed that the vaccine candidate is “being modelled on open source technology, and the Medicines Patent Pool, which is responsible for the intellectual property and licencing elements of the project, will ensure that patents are not infringed upon”.

South Africa has allocated approximately 100-million euros for vaccine development and manufacturing over the next five years, added Manamela.

“The mRNA vaccine technology is also promising for use against other diseases such as TB, malaria, and possibly HIV/ AIDS and the facility will also strive to build its innovation capacity and develop a pipeline of homegrown products, including an mRNA-based vaccine for malaria,” he added. 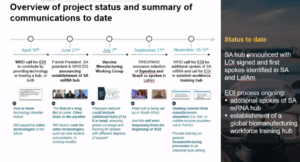 The  South African hub will be based at a company called Afrigen, which will house the equipment and technology, which will be passed on to “spokes” – local and African manufacturers.

The vaccine tech transfer hubs, which are also being set up in other regions, are being governed by the WHO’s Secretariat and the Director-General, assisted by an advisory committee called Product Development for Vaccines Advisory Committee (PDVAC). Each hub has a steering committee.

Key decisions involve which mRNA technologies to choose, intellectual property issues, ensuring the recipients of the technology transfer are applying it correctly and ensuring that the facilities can make other mRNA vaccines when COVID is over.

The South African hub is chaired by Dr Marie-Paule Kieny, the chairperson of the Medicines Patent Pool, and its governance includes the African Centre for Disease Control and Prevention (CDC), and the South African Department of Science and Innovation.