The impacts on Africa of United States President Trump’s decision to withhold funding to the WHO will be ‘quite significant’ as the US is the “number one contributor” of the WHO African Region budget, said Matshidiso Moeti, WHO Regional Director for Africa, at a joint press conference hosted by the WHO and the World Economic Forum today.

Meanwhile, a number of prominent national African health leaders signed an open letter in The BMJ calling the Trump move “petulant” and “short-sighted”.  And in a move to counter some of the budget shortalls, the Bill and Melinda Gates Foundation announced an emergency allocation of US$ 150 million to the WHO to “help speed up development of vaccines, treatment and public health measures” to tackle the pandemic. That was in addition to a previous US$ 100 million emergency allocation.

Africa is the WHO region that stands to lose the most from Trump’s decision to suspend or possibly cut funds, should his move be endorsed by the US Congress, said Moeti, as Washington is the “one of the biggest supporters” to WHO programmes in the region.  The suspension could affect Africa’s longstanding attempts to eradicate polio, as well as other programmes that address HIV, malaria, and work on strengthening Africa’s health systems, she said.

“We are hoping that this decision will be re-thought because the USA is an important strategic partner…and we value this relationship with the USA,” Moeti stressed.

So far, the African Region has only received a third of the promised $151 million contribution from the US for the current 2020-21 budget period, she added, and money needs to keep on coming for COVID-19 preparedness plans as well as other disease control activities to continue.

“We will need about $300 million for the next six months in order to support what [African] countries are doing,” said Moeti.

Among the burning issues is a resurgence of deadly Ebola virus in the Democratic Republic of Congo.

Since Friday, four new cases of Ebola have been reported in the Democratic Republic of the Congo (DRC) after 54 days without a new case, said WHO Director General Dr. Tedros Adhanom Ghebreyesus today at a briefing of UN Missions in Geneva. These reports came just days after the Director General had announced last Monday that DRC “could declare” the Ebola outbreak to be over if no further cases were announced during the week.

As for COVID-19, the pandemic can still be contained in most African countries, Moeti contended, if action now is sustained.

Africa has reported over 17,000 cases of COVID-19, and around 900 people have already lost their lives, said Moeti, citing the most recent Africa Centers for Disease Control data. South Africa, Nigeria and Cameroon now account for around half of confirmed cases, and mortality is ‘rather high’ in countries of West and Central Africa, said Michel Yao head of emergencies for the WHO Africa region.

“We must seize this window of opportunity,” said Moeiti.

Elsie Kanza, World Economic Forum Director for Africa applauded the recent moves to repurpose factories in South Africa and Kenya to produce ventilators and protective equipment. This followed on a call earlier from a Geneva-based NGO for more investment to improve regional manufacturing capacity in the African continent.

She noted that providing local work opportunities was also important in light of the fact that about 80% [of Africans] are employed in the informal sector, and one recent McKinsey study estimates that “about one third of Africans are likely to lose their jobs”, as a result of the pandemic.

In the African context, virus containment is also challenging since physical distancing is “impossible” in various situations, said Dr Tedros in his missions briefing, especially in densely populated areas.

“The virus is moving into countries and communities where many people live in overcrowded conditions, and physical distancing is nearly impossible,” he said. “Vaccination campaigns for polio have already been put on hold, and other vaccination programs are at risk because of border closures and disruptions to travel,” the Director General added.

Dr Tedros added that WHO was calling on governments to rigorously enforce bans on so-called “wet markets” where illegal wildlife are commonly contained and sold in Asia for their meat, and as ingredients in traditional medicine. Illegal capture and sale of reptiles, endangered pangolins, or other wild animals in a Wuhan China wet market is believed to have been the source of the COVID-19 leap from animals to humans.

“WHO maintains that governments should rigorously enforce bans on the sale of wildlife. And they must enforce food safety and hygiene regulations to ensure that food that is sold in markets is safe”, Dr. Tedros added.

The U.S. provided $893 million of the WHO’s funding over the last two-year budget period of 2018-19. That represented about one-fifth of WHO’s total $US 4.4 billion budget for those years. Of those funds, nearly three-fourth were earmarked for “specified voluntary contributions” while the rest was provided as “assessed” funding, or part of Washington’s general commitment to the WHO.

In 2018-2019, Africa received some US$ 1.64 billion in WHO funding, with most funds as “earmarked” contributions by member states. The US was the biggest contributor, with 31% of the total contributions to Africa – almost twice as much as the United Kingdom and 2.5 times more than Germany.

In its most recent budget proposal for WHO, dating to February 2020, the Trump administration had already called for slashing the U.S. assessed funding contribution to the Organization by US$ 57.9 million in the current budget year – a move that had prompted an outcry from Washington observers who noted that the move was ill-timed in light of the COVID-19 crisis. 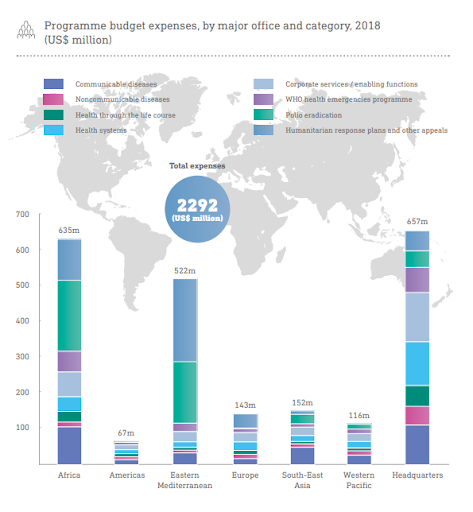 Trump’s attacks on WHO, have revolved around the Organization’s allegedly slow reaction to the coronavirus threat in early January which he claims pandered to China and cost lives.

However, US intelligence agencies were aware of the coronavirus outbreak by mid-November, drew up a classified document, and alerted NATO as well as Israel’s security forces, which did nothing about it, Israel National Television N12 station reported on Thursday.

“US intelligence informed the Trump administration, “which did not deem it of interest,” the reported stated, adding that even so, the Americans decided to update two allies with the classified document: NATO and Israel.

In an letter addressed directly to Dr Tedros, published in the prominent medical journal, the BMJ, a series of leading African, British, Canadian and American public health experts protested the US move saying that they had noted with concern “recent personal and institutional attacks against you.”

“We want to let you know that the world and humanity needs the institution of the World Health Organization (WHO) now more than ever. In the wake of the COVID -19 pandemic the technical guidance and leadership of the WHO that you and the leadership team in Geneva, Regional and Country Offices round the world is valued and appreciated”, stated the letter, which was signed by members of a Commission that authored a report: “The Neglected Dimension of Global Security: A Framework to Counter Infectious Disease Crises” in 2016.

“Having reviewed a wide range of options for a coordinated global response to infectious diseases, we concluded that the WHO is best placed to play the leadership and coordinating role and that if there was no WHO, we would have to invent one,” the signatories of the letter stated.  “At this critical time in human history, it has fallen upon you and your WHO team to carry the singular responsibility of leading and coordinating the global charge to stop COVID -19 from killing more people and wreaking more collateral economic and social damage to the world.”

The letter was signed by renowned Ugandan heart surgeon Francis Omaswa, former university chancelor who now heads the African Center for Global Health and Social Transformation in Kampala, along with academics from Tanzania, South Africa, Ethiopia, as well as the UK, Canada and the United States.

Meanwhile, in a press release issued on Thursday, the American Society of Tropical Medicine and Hygiene, described the Trump move as “reckless and counterproductive,” and called for support to be immediately resumed.

“In the midst of a global pandemic, withholding U.S. funding from the World Health Organization is reckless, harmful and counterproductive. A step like this only encumbers the global response against COVID-19 instead of bolstering it. It makes no sense from an economic, social or health perspective,” said the statement by the ASTMH, which hosts one of the most prominent global conferences on health and science themes every year.

“The WHO serves as the frontline support system for all countries—including the United States. Working together is the smartest, most efficient and cost-effective way to confront this unprecedented, spreading global health crisis. No other organization can play the role of WHO or its central diplomatic role or perform the service they do across borders and cultures.”

The organization stressed that the US move could have immediate repercussions in low-income regions such as Africa, saying: “Some of the wide-reaching consequences that could occur from cuts in U.S. funding are:

Easing the Lockdown in Europe

As a handful of European countries slowly start to lift their lockdowns, the WHO recommended to governments that they aim to satisfy 6 criteria prior to opening up again. The criteria are contained in the recent WHO strategy update issued earlier this week.  These criteria include ensuring a tight clamp on continued COVID-19 transmission; strong health infrastructure to test, trace and isolate cases; preventative measures in public spaces and healthcare settings; a system for managing risks from virus importation by arriving travelers; and full community engagement in the battle against the virus.

Switzerland was set to gradually ease countrywide lockdown restrictions over coming weeks, following recent moves by Denmark, Austria, The Czech Republic and Germany. The Federal Council announced on Thursday that hospitals will resume all routine medical activities on 27th April. Businesses offering personal services such as hairdressing, salons, massage and cosmetic studios will be allowed to reopen starting April 27th. Pending further development of the pandemic, primary and secondary schools will reopen on 11 May while higher education institutions, as well as museums and libraries, are set to reopen 8th June.

Tsering Lhamo contributed to this story.