The international team assembled by the World Health Organization (WHO) to investigate the origins of SARS-CoV-2 has identified animal transmission – through an elusive ‘Animal X’ – as the most likely route of infection.

The long-awaited report was released on Tuesday after the 17-person expert team, together with a 17-person team of Chinese scientists, visited Wuhan and its surroundings during January and February to examine evidence about the virus, which was first identified in 174 people in Wuhan in December 2019, and has since infected over 128 million people and caused 2.7 million deaths.

WHO Director-General Dr Tedros Adhanom Ghebreyesus said that the report advances the world’s understanding in important ways, but it also raises questions that will need to be addressed by further studies.

“As far as WHO is concerned, all hypotheses remain on the table,” said Dr Tedros. “This report is a very important beginning, but it is not the end. We have not yet found the source of the virus, and we must continue to follow the science and leave no stone unturned as we do.”

Tedros added that no single research trip could provide all the answers, as “finding the origin of a virus takes time and we owe it to the world to find the source so we can collectively take steps to reduce the risk of this happening again”.

What follows is a summary of the report’s key points, which the team described as a “work in progress”.

Hypothesis: Transmission of SARS-CoV-2 (or very closely-related progenitor virus) moves from an animal reservoir host to human, and is followed by direct person-to-person transmission. 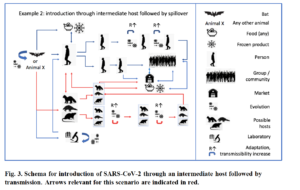 Hypothesis: SARS-CoV-2 is transmitted from an animal reservoir to an animal host, followed by spread within that intermediate host (“spillover host”), and then transmitted to humans.

Information still needed: Further surveys, including a wider geographic range. Studies of the supply chain of Wuhan markets have not found any evidence of infected animals but provided information for follow-up studies, including targeting supply chains from wild-life farms in provinces where the higher prevalence of SARSr-CoVs have been detected in bats.

Animal products from outside Southeast Asia, where more distantly related SARSr-CoVs circulate, should not be disregarded.

3. Introduction through the cold/ food chain

Hypothesis: SARS-CoV-2 is introduced or amplified through the cold/ food chain. This could involve direct zoonotic transmission, or spillover through an intermediate host.

There are some preliminary reports of SARS-CoV-2 positive testing in other parts of the world before the end of 2019.

There is also evidence of more distantly related SARSr-CoV in bats outside Asia. Some producers in these countries were supplying products to the markets.

If there are credible links to products from other countries or regions with evidence for circulation of SARS-CoV-2 before the end of 2019, such pathways should be followed up.

If there are leftover frozen products from the Huanan market from December 2019, particularly frozen animal products from farmed wildlife or linked to areas with the early circulation of SARS-CoV-2, these should be tested. 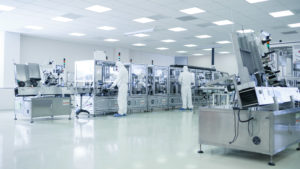 4. Introduction through a laboratory incident

Hypothesis: SARS-CoV-2 is introduced through a laboratory incident, reflecting an accidental infection of staff from laboratory activities involving the relevant viruses. We did not consider the hypothesis of deliberate release. The deliberate bioengineering of SARS-CoV-2 for release has been ruled out by other scientists following analyses of the genome.

At the end of the report, the team called for “a continued scientific and collaborative approach to be taken towards tracing the origins of COVID-19”, something that has been echoed by WHO.