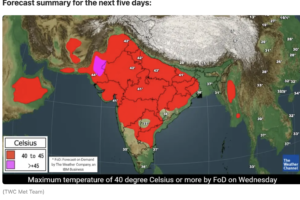 More than a billion people in India and Pakistan are expected to face temperatures of over 40ºC in the next few days, peaking as high as 50Cº in Pakistan as record-breaking heatwaves that began in early March continue to affect South East Asia.

The heat is also jeopardising India’s wheat exports, which are even more crucial for global supply because Russia’s war in Ukraine is affecting the availability of wheat from Europe’s breadbasket.

#India is currently baking under a record-breaking heatwave, with temperatures soaring to 49C in breadbasket regions of Haryana and Punjab

One farmer in Uttar Pradesh told me he lost 60% of his wheat crop due to the heat wave #climatecrisis https://t.co/ydpVgXpo1o

Daily temperatures in the Indian states of Gujarat, Maharashtra and Delhi recorded some of their highest temperatures ever, and although this time of year is usually hot, the duration of the heatwaves is virtually unprecedented – and the last time such a heatwave was experienced was 122 years ago.

Scorching & dangerous heat on the way for India & Pakistan.

It has been hot here for a very long time now… since early March. pic.twitter.com/EuxZQR45Rc

Thursday and Friday’s temperatures are expected to reach 50ºC in parts of Pakistan, and the Pakistan Meteorological Office has warned of the possibility of glacier lake outburst floods (Glofs) in vulnerable areas of Gilgit-Baltistan and Khyber Pakhtunkhwa triggered by melting snow and ice.

The temperature in Gilgit-Baltistan and Khyber Pakhtunkhwa is expected to remain 05-07 °C higher above normal for coming 5 to 6 days creating heat wave type situation in glaciated regions of #GilgitBaltistan and KhyberPakhtunkhwa.#GLOF#ClimateActionNow pic.twitter.com/RxCYA1zZtF

​The temperatures in these areas is expected to remain 5 to 7 °C higher than normal for the next five to six days, the PMO warned.

Strong dust storms with wind speed reaching up to 35 km per hour are likely to blow over Rajasthan, Punjab and Delhi  from Wednesday to Friday, according to the Weather Channel.

The Indian Meteorological Department (IMD) reported that temperatures in the past two weeks have been 4 to 7°C above normal in parts of Himachal Pradesh and Punjab as well as Haryana Delhi, Jharkhand and Madhya Maharashtra.

It predicts an increase in daily maximum temperatures by 2 to 4°C during the next three days across Central India. The highest temperatures on Wednesday 45.2°C, recorded at Wardha (Vidarbha) in Maharashtra state.

Increases of about 2°C above the usual maximum temperatures are expected over most parts of Northwest India during next three days, according to the IMD.

The IMD has urged local authorities and residents to take care of vulnerable people including the elderly, small children and pregnant women.

Meanwhile, demand for electricity has soared in Delhi and other affected areas as people take refuge indoors in  airconditioned rooms. Water shortages have also affected parts of Delhi.

“When I was a young child, it made headlines when temperatures crossed 40 degrees Centigrade,” Jyoti Pande Lavakare, a Delhi resident, environmental author and frequent Health Policy Watch contributor, told us. “These days 45 degrees is normal summer temperature.

“For those of us who suffer from climate anxiety, this is just one of the repercussions of the harm we have caused to our planet, one of our worst fears coming true. How much can the human body adapt?”

Care for the old during #heatwave👇 Here are some useful tips.
Courtesy: @ndmaindia pic.twitter.com/xviVh7ND1A