Over 400 US organisations and 115 Members of the European Parliament declared their support this week for a waiver on intellectual property rights for COVID-19 products, due to be discussed by the World Trade Organisation (WTO) General Council.

Even so, WTO insiders said that consensus was more likely to build around a “third way” approach for voluntarily relaxing patent rights advocated by new WTO Director General Ngozi Okonjo-Iweala – in light of stiff opposition from other countries in Europe and Asia to the formal waiver plan.

Informed observers also predicted that as a first step, the WTO was more likely to approve a much softer proposal by the “Ottawa Group” of 13 developed and emerging economies calling upon countries to voluntarily relax export restrictions and tariffs on key COVID-19 health products. 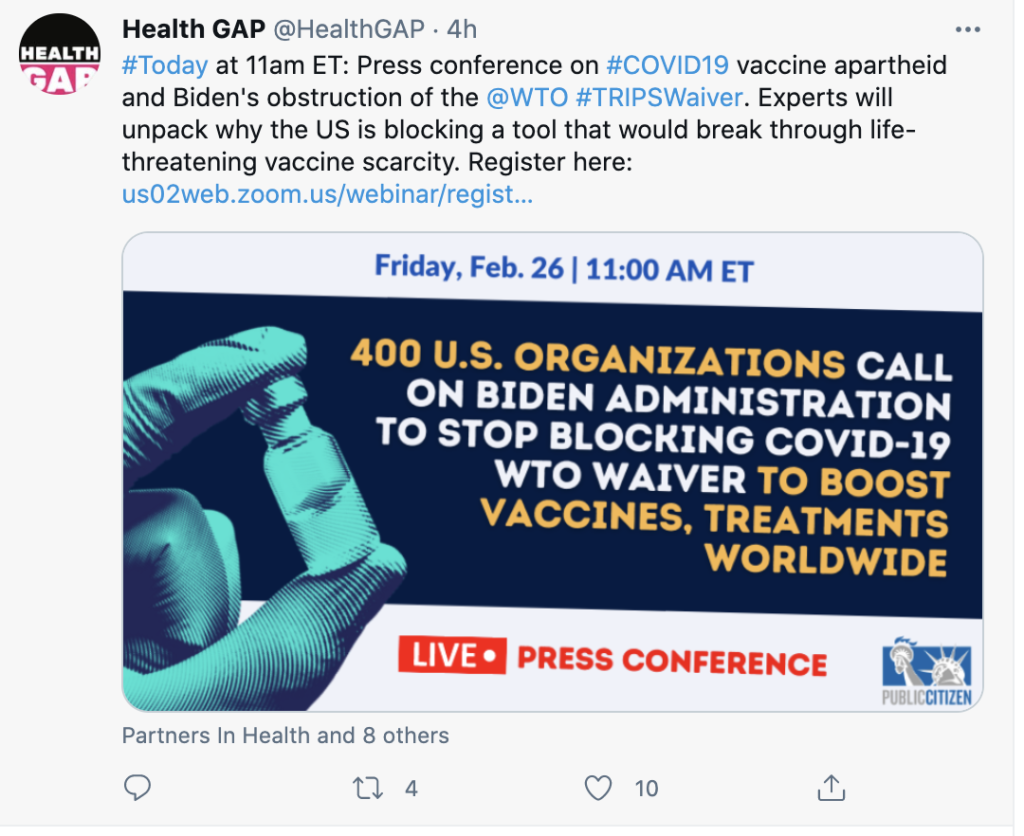 At a high profile media briefing on Friday in Washington DC, US consumer, faith, health, development, labour, human rights, and other civil society groups urged the White House to reverse the Trump administration’s opposition to an emergency COVID-19 waiver of World Trade Organization (WTO) intellectual property rules so that more generic supplies of vaccines, treatments, and diagnostic tests can be produced in as many places as possible as quickly as possible.

“The pandemic cannot be stopped anywhere unless vaccines, tests, and treatments are available everywhere so variants that evade current vaccines do not develop,” said the group in its appeal.

Congresswoman Jan Schakowsky said she and 29 other congress members had signed a letter alongside 400 faith-based, labour and human rights urging US President Joe Biden to support the waiver.

“We have vaccine apartheid. Pharmaceutical companies and some rich countries are standing in the way of poorer countries getting access to vaccines,” said Schakowsky, a Democrat from Illinois and chair of the Consumer Protection and Commerce Subcommittee.

Sara Nelson, head of the Association of Flight Attendants, told the media briefing that her members support the waiver because they “know first hand the impact of the pandemic on our health and our livelihoods”.

“I get choked up to think that some people might only get access to vaccines in 2024,” said a tearful Nelson. “I can’t imagine this going on until 2024, and the threat this poses to our livelihoods, lives and jobs. People must always be before profit.”

Meanwhile,  a cross-party group of 115 Members of the European Parliament (MEPs)  also issued a declaration urging the European Commission and European Council to drop their opposition to the TRIPS waiver.

The waiver on certain Trade-Related aspects of Intellectual Property Rights (TRIPS) being championed by South Africa and India, would remove IP barriers on COVID-related medicines, vaccines and other health products. The TRIPS Council has been unable to reach consensus on the waiver and is expected to submit an oral report to the General Council.

Access groups have championed the waiver proposal, saying that would enable greater access to affordable COVID-19 health technologies, including vaccines, in particular for developing and middle-income countries. It is supported by the African Union and most of Latin America.

Geneva trade and diplomatic sources have said, however, that it is extremely doubtful that the WTO General Council would actually act, at least in this session, to approve such an initiative.

There has been staunch opposition from the United States, United Kingdom, and other G-7 countries to the waiver measure, which opponents say would harm intellectual property rights, and thereby dampen pharma R&D investments.

New WTO Director General Dr Ngozi Okonjo-Iweala, elected just last week, has talked about a “third way” to break the deadlock between rich countries and poorer ones over the issue – focusing on the issuance of more voluntary licenses by pharma companies to low- and middle-income countries for generic manufacture of their patented products.

As a more likely initial WTO gesture on the pandemic, the General Council could next week approve a draft decision on Trade and Health around which more consensus may be building. This could pre-empt the waiver negotiations due to resume in the TRIPS Council on 10 and 11 March.

The draft decision, based on a Trade and Health initiative launched last year by the “Ottawa Group” of 13 countries, urges countries to review and “promptly eliminate unnecessary restrictions” on export of essential COVID health products,  temporarily remove or reduce tariffs; streamline customs processes; strengthen supply chains, display transparency in trade-related monitoring, and step up cooperation with the WTO and other international agencies in trade-related aspects of pandemic response.

The measure, based on a joint statement from June 2020, has been backed by the Ottawa Group’s mix of high-income countries, which includes Norway, Switzerland, the EU and Canada, as well as emerging economies such as Kenya, Mexico and Chile, could at least send a signal of greater multi-lateral cooperation in pandemic related trade issues, sources say.

Latin American countries are, meanwhile, expected to make a statement calling for relaxation of export restrictions, in the wake of recent European Union moves to restrict the export of vaccines manufactured in the EU region after supply shortages emerged.

In their declaration on the TRIPS waiver, European members of parliament (MEPs) stressed that “the EU’s open opposition to the TRIPS waiver risks exacerbating a dangerous North-South divide when it comes to affordable access to COVID-19 diagnostics, personal protective equipment, treatments and vaccines.

“The WTO decision on a potential waiver offers a crucial and much-needed act of effective solidarity, as it is an important step towards increasing local production in partner countries and, ultimately, suppressing this pandemic on a global scale. As the Commission President has repeatedly stated, no one is safe until everyone is safe.”

Earlier in the week, Archbishop Ivan Jurkovic, Holy See representative to the United Nations, said that “the principles of justice, solidarity and inclusiveness, must be the basis of any specific and concrete intervention in response to the pandemic”, and the TRIPS waiver “would be a strong signal demonstrating real commitment and engagement and thus moving from declaration to action in favor of the entire human family”.

WHO’s Director General Dr Tedros Adhanom Ghebreyesus also reaffirmed his support for the WTO IP waiver initiative on Friday. Speaking at a WHO press conference, he and other senior WHO officials said that the IP waiver offers a “practical solutions” for scaling up access, as compared to Friday’s Security Council Resolution on the issue, which remains largely symbolic.

“I’m glad the UN Security Council has voted in favour of vaccine equity. And at the same time, if we’re going to take practical solutions, then the waiver of intellectual property should be taken seriously,” Tedros told the media at the body’s bi-weekly COVID-19 briefing.

“We are very interested in the outcome of this discussion at the TRIPS Council,” said Mariangela Simao, head of the WHO’s Access to Medicines and Health Products. “We welcome any movement from countries to decrease and to address current barriers to access.”,