Less than half of Africa’s citizens (52%) – some 615 million people – have access to the healthcare they need, the continent’s quality of health services is generally poor and the family planning needs of half the continent’s women and girls are unmet.

This is according to a report on Africa’s progress toward achieving universal health coverage (UHC) released on Monday at the Africa Health Agenda International Conference (AHAIC).

Each year, approximately 97 million Africans, representing 8.2% of the continent’s population, incur “catastrophic healthcare costs” – particularly in Sierra Leone, Egypt and Morocco. Annually, 15 million people will be pushed into poverty as a result of these out-of-pocket costs, according to the report, which was compiled by a multi-national AHAIC commission.

“ An important part of that journey is ensuring a reliable supply of safe, effective and high-quality medicines across the continent. To that end, WHO is working with the African Union and the Africa Centres for Disease Control (CDC) to establish the African Medicines Agency (AMA). And I call on all AU countries to ratify the treaty so that African Medicines Agency can enter into force.”

The AMA is envisaged as a central regulatory agency expected to improve access to medicines on a continent where some countries simply don’t have the capacity to regulate medicines.

Life Expectancy Has Increased Thanks to Malaria and Reproductive Health Management

Also opening the conference was Kenya’s President Uhuru Kenyatta who pointed out that Africa’s life expectancy had increased from around 40 in the 1960s to 64 currently, mainly as a result of better management of malaria, and reproductive health services.

“If we are to achieve universal health coverage by 2030, we need to give greater priority to primary health care, water, sanitation and hygiene,” said Kenyatta. “Indeed, during this COVID period, all of us have been amazed by how simple hygiene practices such as hand washing, introduced during this response to this pandemic, have reduced diarrhea and other diseases.”

Tedros praised Kenya and Rwanda for making the most progress on the continent in achieving UHC.

Kenyatta explained that user charges had been removed in Kenyan dispensaries and health centres, and free maternity services had been introduced.

“Currently, we are embarking on a national programme to ensure universal access to health hospital insurance fund through mandatory enrollment, and a full government subsidy for the poor and most vulnerable,” said Kenyatta. 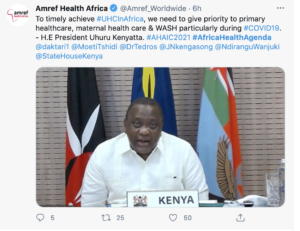 Both he and Kenya’s Health Secretary, Mutahi Kagwe, stressed the importance of local production of health products.

Welcoming the fact that the International Federation of Pharmaceutical Manufacturers Associations (IFPMA) was one of the conference sponsors, Kagwe said he wanted to send a message to them to improve production capacity on the continent.

“It is possible for you to have money and not to have supplies,” said Kagwe. “One of the most frustrating and panicky things for African health ministers at the start of the pandemic was when we did not have PPEs yet we were getting cases in our hospitals. We didn’t have reagents but we wanted to test. Why didn’t we have reagents? Because they are not made on the continent. Regions have closed systems and there was no way of getting reagents from anywhere,” said Kagwe.

COVID-19 Has ‘Made Us Aware of Our Potential’

Rwanda’s health minister, Dr Daniel Ngamije, said his country has introduced community-based health insurance for those who could not pay for health services.

“The premium for their membership of this scheme is paid by the government and it allows them to be treated from the primary health care application level of care,” said Ngamije.

Rwanda had also recognised that women’s and girls’ access to family planning was hampered by religious health service providers not providing this service and by the legal requirement for girls to be 18 before they could get contraceptives.

The Rwandan government was trying to ensure it had family planning clinics in areas dominated by faith-based service providers and it was engaging with parliament to address the legal barrier of age which was driving unwanted pregnancies among teenagers.

Ethiopia’s health minister, Lia Tadesse, said that her government had initially subsidized services for the poor while the rest pay out-of-pocket.

“But this was not sustainable for government and also caused high out-of-pocket expenses. So in the past few years, Ethiopia started a community-based insurance system and we are on our way to starting social health insurance. We still have exempted services for things like family planning, immunization, HIV, maternal and neonatal services but universal insurance is what we are trying to head towards.”

Some of the solutions proposed by the report to speed up UHC include using the “vast network of African traditional healthcare providers” to improve primary healthcare services, “especially preventive and promotive care”, strengthening governance including anti-corruption strategies and progressively increasing financing of the health sector.