The model is outlined in the new report 15 Years of Needs-Driven Innovation for Access, by Drugs for Neglected Disease Initiative (DNDi), released Wednesday.

The model etches an alternative formula to conventional for-profit R&D systems, highlighting both successes and challenges that are faced in developing treatments for over a dozen diseases, such as sleeping sickness and Chagas disease, that affect some of the poorest and hardest to reach populations in the world.

“After 15 years I think I am proudest of the model. It was originally just an idea but now it is a reality,” Bernard Pécoul, executive director of DNDi, said during a day-long symposium reflecting on DNDi’s research experiences held on the occasion of the organization’s 15-year anniversary. He said that the report takes “30 pages to describe 15 years of a story.”

According to the report, the organization has delivered eight field-adapted and affordable treatments for diseases as varied as paediatric HIV, sleeping sickness, and Chagas disease to date, and expects seven or eight more treatments by 2023. Currently, DNDi has more than forty R&D projects across seven disease areas, as well as more than 20 new compounds – known as “new chemical entities (NCEs) – in early stages of development.

The report attributes DNDi’s success to an innovative funding, partnership and access model, among other factors. By partnering with academia and the private sector, for instance, the organization is able to access existing research databases holding information about millions of compounds, and has screened 4 million to date. It is through such screening that the organization has been able to identify compounds that had potential to treat serious diseases, but had simply been ignored or discarded in the R&D pipeline because their profit potential was low.

At the same time, the organization’s access policies ensure that the collaborations with industry are negotiated up front, in a way that any consequent drugs produced will be made widely available at affordable prices– e.g. through open licensing or generic formulations that are not limited by patent requirements to pay expensive royalties.

In addition, some 60% of DNDi’s funding still comes from public sources such as government grants, and the organization attempts to maintain financial independence by “not having one donor with more than a 25 percent share of contributions,” said Pécoul.

In terms of collaborations, DNDi’s model has stressed working in countries that are affected by the diseases that it is tackling, the report notes.

The organization is working with over 180 partners in more than 40 countries, with at least one third of the collaborating institutions based in lower-middle income countries. These partnerships include five new disease-specific clinical research platforms based in Africa and Latin America. Through these partnerships, the organization runs an average of 20 clinical trials enrolling over 2500 patients total at any given time.

“Public Interest R&D” – How Does This Model Work?

In keeping with its public-interest mission, the organization publishes its financial data on an annual basis to remain “open and transparent,” informing the debate around R&D costs. 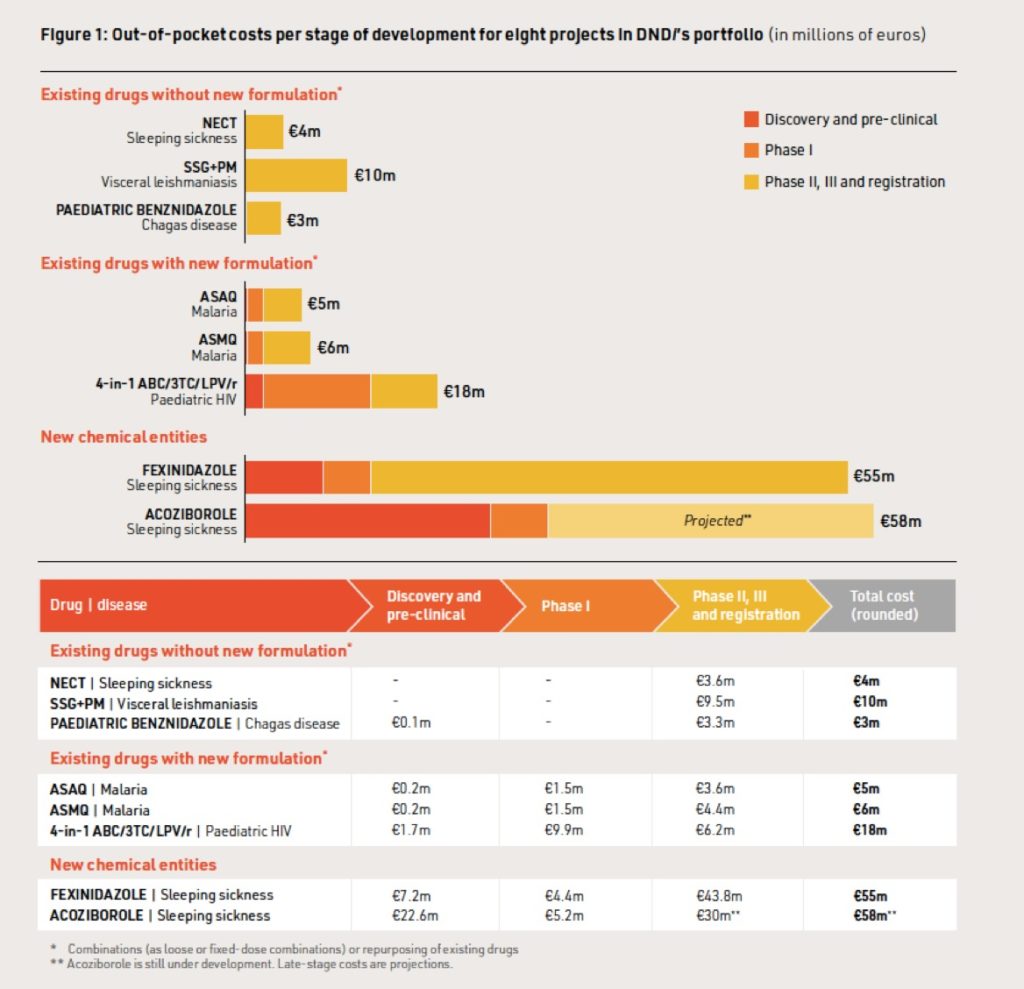 Adjusting for attrition, DNDi estimates that it can develop and register new combinations or new formulations of existing treatments for €4-32 million, and an entirely new chemical entity for €60-190 million. Conventional industry estimates are for a US$2.6 billion cost to bring a new drug to market. Although the numbers are not directly comparable because DNDi’s work is focused on a few key infectious diseases and industry estimates also include the “opportunity costs” of capital investments, they provide an order of magnitude comparison of how non-profit R&D can be cost-effective, DNDi experts say.

Public and private contributions pay for the cost of R&D up front, allowing the organization to focus on developing new drugs based on patient needs rather than the need to recoup R&D costs.

R&D is guided by the use of public-interest “target product profiles,” which include concerns around access and affordability from the outset.

For example, until 2009, the standard treatment for African sleeping sickness caused by a parasite transmitted by the tsetse fly, was an arsenic-based intravenous treatment that was so toxic that it used to kill one in twenty patients – but the disease itself was almost invariably fatal without treatment.

Sleeping sickness affects some of the poorest and hardest-to-reach populations in the world, with over 80% of cases occurring in the most remote regions of the Democratic Republic of the Congo. In the traditional treatment, highly trained staff had to deliver as series of infusions over a period of weeks, following diagnosis via a painful lumbar puncture.

That replaced the arsenic-based Melarsoprol. However, the treatment still requires 21 days of hospitalization, or massive equipment if deployed in a field clinic, as well as highly trained staff who had to deliver a series of infusions, following diagnosis via a painful lumbar puncture.

In response to the need for a yet more adaptable and field-friendly treatment, DNDi identified fexinidazole out of a Sanofi library of chemicals as having potential efficacy against sleeping sickness.

In November 2018, the drug was approved by the European Medicines Agency as first oral medication for sleeping sickness, and it was registered in DRC just a month later, thanks to an EMA collaboration with African regulatory authorities, also facilitated by DNDi.

The story of sleeping sickness illustrates how a collaborative, open and transparent process, driven by a global network of partners, has been key to the DNDi treatment breakthroughs.

Fexinidazole ultimately was developed in partnership with more than 15 organizations representing government, private industry, and civil society, while Sanofi remained the main pharmaceutical development partner. Clinical trials for fexinidazole were conducted in the DRC and Central African Republic.

“DNDi owes its successes to collaborations with a large global network of over 180 partners from the pharmaceutical industry, academia, health ministries, other NGOs, treatment providers, and patients and their communities, as well as our donors,” said Pécoul in a press release.

“We are the conductors of a ‘virtual orchestra’, and the eight new treatments we have delivered in the past 15 years would not exist without the commitment and shared vision of our partners and donors.”

One of the latest brainchilds of DNDi is not a product – it’s a new organization dedicated to tackling the growing threat of antimicrobial resistance, the Global Antibiotic Research and Development Partnership (GARDP).

Initially housed within DNDi after its inception in 2016, GARDP launched as an independent organization in July and is now running four R&D programmes for drug-resistance infections, applying the DNDi drug development model to the neglected area of developing new and improved antibiotic treatments.

Related
One World, One Health – Tackling the Superbug Challenge
Inside View
Gavi Urged to Buy At Least 30% of Vaccines From African Manufacturers
Africa CDC
After Declaring Emergency – US Weighs Intradermal Monkeypox Vaccine Injections to Stretch One Dose into Five
Monkeypox

Related
One World, One Health – Tackling the Superbug Challenge
Inside View
Gavi Urged to Buy At Least 30% of Vaccines From African Manufacturers
Africa CDC
After Declaring Emergency – US Weighs Intradermal Monkeypox Vaccine Injections to Stretch One Dose into Five
Monkeypox