If sustainability of vaccine production is the question, then mRNA technology is the answer, Martin Friede, co-ordinator for vaccine research at the World Health Organization (WHO), told a panel convened by the Global Health Centre at the Geneva Graduate Institute on Monday.

“The big advantage of mRNA is that, in theory, you can make many vaccines with that technology – you can make flu vaccines, possibly chicken pox vaccines, herpes zoster vaccines, TB vaccines, possibly even HIV vaccine,” Friede told the panel on the long-term sustainability of local vaccine production, convened in partnership with the Republic of Korea’s (ROK) permanent mission in Geneva.

In addition, he said, you can produce enough bulk mRNA for about 100 million annual vaccines in a small facility that cost about $10-11 million to set up.

This contrasts with WHO attempts some years back to encourage the decentralised manufacture of influenza vaccines, which needed capital investment of around $200 million per facility. That vaccine production method – based on eggs – could not be adapted to make other vaccines, he added.

There are two big buts related to mRNA, however, according to Friede. The first is that few people know how to make mRNA vaccines and most of them work for big pharma companies BioNtech or Moderna.

The second is that, unless a facility makes more than one vaccine, staff will get bored and move on.

To address the first obstacle, the WHO set up an mRNA development hub in South Africa to develop mRNA technology for low and middle-income. Big pharma demurred to share their COVID-19 vaccine recipe and know-how, so the WHO enlisted the help of academics that had been involved in the discovery of mRNA. This hub has made a Moderna-like vaccine that it is in the process of starting animal trials on.

To address the challenge of under-utilised staff, Friede suggests that mRNA capacity can be added to a facility that is producing other products – such as biotherapeutics, monoclonal antibodies, or even veterinary or agricultural products.

Meanwhile, Chioma Nwakuchwu, senior manager for public policy engagement at Gavi, spoke of the “delicate balance of market shaping” that the global vaccine platform has been involved in over the past two decades to broaden the vaccine manufacturing base.

“When we first started in 2001, there were only five suppliers from five different countries. But as you’ll see, over the past 20 years or so, we had 18 manufacturers from 12 countries,” said Nwakuchwu. 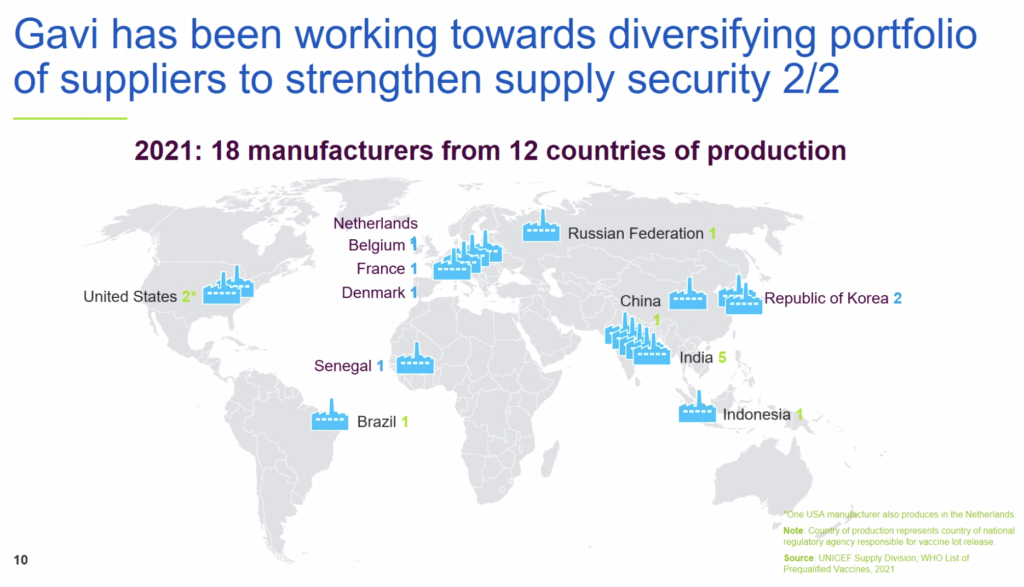 However, she acknowledged that there had been an inadequate supply of vaccines during the earlier part of the COVID-19 pandemic, and Gavi was looking into how to add more manufacturers to its database – not just for pandemics but to produce routine immunisations.

“We see this as an opportunity to expand our market shaping as well as a healthy market framework in line with the vision of the organisation which is truly about equitable access.”

In response to Friede asking whether Gavi was considering “favouring a regional procurement for regional use, or at least some mechanism around this”, Nwakuchwu confirmed that Gavi was exploring this with the Africa Centres for Disease Control – for non-COVID products.

“Initially, the focus was on COVID-19, and we’re really encouraging and speaking with the Africa CDC because they are spearheading this initiative for Africa to say, ‘let’s look at the disease landscape for Africa. Let’s prioritise non-COVID vaccines because this could be where, in terms of your investment, it makes more sense’.

“The challenge has to be around the coordination because this is a continental ambition. They’ve set out about 22 antigens that they want to procure,” she said.

She affirmed that Gavi supported increased manufacturing capability in Africa to “right-side” delays that prevent equitable access to medical products, but added that the organisation was in the process of developing a white paper looking at how to accommodate new manufacturers while ensuring that there was “ a stable and healthy global supplier base”.

The WHO opened a second hub, this time on bio-manufacturing, in the Republic of Korea (ROK) in February to train people from low- and middle-income countries in how to produce biologicals, such as vaccines, insulin, monoclonal antibodies and cancer treatments.

“My country is determined to support low and middle-income countries in strengthening their bio-manufacturing capacities so that we can pave the way towards a safer and more secure world when encountering health crisis,” Ambassador Jung Sung Park, deputy representative from the ROK permanent mission in Geneva, told the panel.

Hyunsook Kim, the director of the hub which falls under the ROK health ministry, says that the hub has already run four training sessions this year – but that practicals are essential for the learning process, otherwise it’s like “watching on YouTube how to make a cake without baking one yourself”. 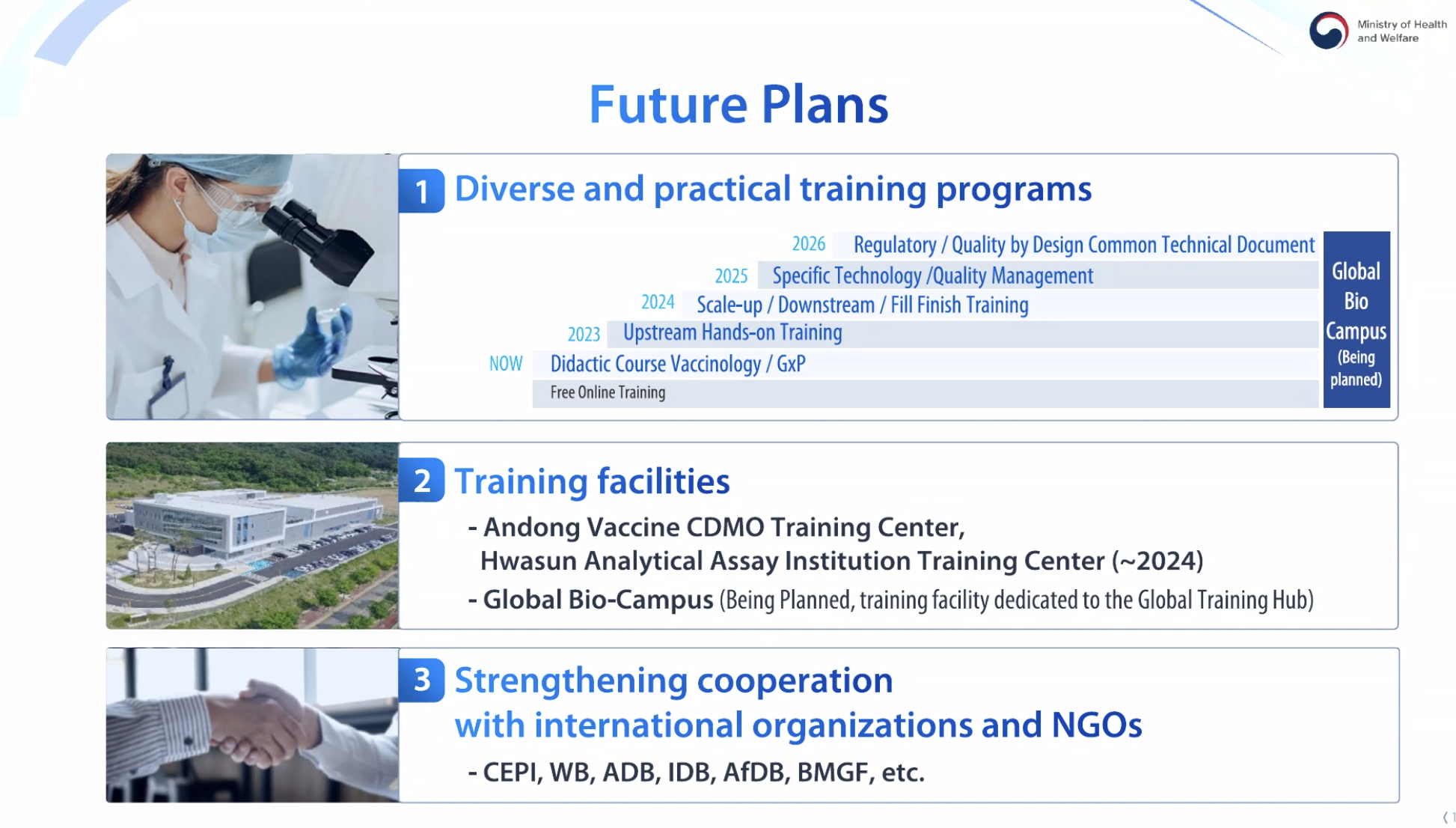 She added that next year, more hands-on training would be provided and that the hub was speaking to donors to get more investment, as well as expanding the premises to establish a “global bio-campus”.

Related
Africans Struggled to Get COVID-19 Tests – What Must Change Before the Next Pandemic?
Drug & Diagnostics Development
Africa’s Efforts to Harmonize Regulation of Medicines Are Making Progress
Universal Health Coverage
As Drug Resistance Surges, Experts Call for Antibiotics for Newborns to be Prioritised
Antimicrobial Resistance

Related
Africans Struggled to Get COVID-19 Tests – What Must Change Before the Next Pandemic?
Drug & Diagnostics Development
Africa’s Efforts to Harmonize Regulation of Medicines Are Making Progress
Universal Health Coverage
As Drug Resistance Surges, Experts Call for Antibiotics for Newborns to be Prioritised
Antimicrobial Resistance