More than one-third of low- and middle-income countries worldwide are facing significant rates of obesity alongside continued pockets of undernutrition, according to a major new study published on Monday in The Lancet.

The four-part series The Double Burden of Malnutrition, led by the World Health Organization in collaboration with a number of universities and researchers worldwide, examined historical nutrition survey data to estimate the prevalence of obesity alongside undernutrition across some 126 countries.

Some 48 of the 126 low- and middle- income countries surveyed had a “double burden” of obesity and undernutrition, the study found. According to the study criteria, this meant that at least 20% of the overall population was overweight or obese, while at the same time a high proportion of children were either stunted (30% having low height for their age) or wasted (15% having low weight for their height) or more than 20% of adult women were particularly thin.

The series heralds “a new nutrition reality in the world,” said Francesco Branca, lead author of a Lancet Comment that is part of the series, and director of the Department of Nutrition for Health and Development at the World Health Organization in a press conference.

Obesity, once a trend mostly seen in higher-income countries has now expanded to middle- and low-income countries – often existing right alongside undernutrition as well, the series emphasizes.

Children are both experiencing undernutrition in early life and then becoming overweight later – due to the increasing preponderance of processed foods, fast foods and carbohydrate dense and/or fat-heavy foods in local diets, and decreased access to fresh, healthy food options, the authors conclude.  This, in turn, increases the risk of non-communicable diseases such as type 2 diabetes, stroke, and heart disease.

“The poorest countries in the world are carrying an enormous burden of undernutrition and now a growing burden of overweight and obesity,” said Abigail Perry, senior nutrition advisor at the UK Department for International Development (DFID) and the chair of the stakeholder group of the Global Nutrition Report at the launch of the series at a webcast event in London on Monday.

Changing food systems are largely to blame for the dual trends, the report finds.

Since 2004, worldwide availability of unhealthy processed foods, snacks and beverages high in energy, sugar, fat, and salt has soared. These foods are often marketed aggressively and more easily accessible and cheaper than healthy alternatives. Sales of breastmilk substitutes are also growing, despite strong evidence that breastfeeding is a healthier alternative which reduces risks of both undernutrition as well as providing a healthier nutritional balance to infants.

In addition, urban environments and lifestyles are raising barriers to safe, healthy physical activity, that could help reduce some of the obesity risks.

“The poorest low- and middle-income countries are seeing a rapid transformation in the way people eat, drink, and move at work, home, in transport and in leisure,” explained author of the first paper in the series, Barry Popkin, professor at University of North Carolina, USA, in a press release.

Ultra-processed foods, he said, are linked to increased weight gain and negatively affect infant and pre-schooler diets. Access to fresh, healthy foods is becoming more constrained in low-and middle-income countries due to disappearing fresh food markets as well as growing “control of the food chain by supermarkets, and global food, catering and agriculture companies in many countries,” he added.

So far, the research informing health sector policies that address malnutrition have focused largely on nutrients and nutrient supplementation, noted Branca, in a press briefing prior to the report’s release.

The report reflects the need to take more of a systems approach, he said, looking at dietary balance, and how health systems and food systems should support dietary choices for a healthy, balanced diet, including including fresh fruits, legumes, seeds, fruits and whole grains, along with modest amounts of meat or fish, as appropriate.

“Without a profound food system transformation, the economic, social, and environmental costs of inaction will hinder the growth and development of individuals and societies for decades to come,” said Branca.

Countries need to adopt a set of “double-duty” nutrition measures to address the double burden – including measures that health systems can take to promote healthy eating during pregnancy and early childhood, adjustment to food supplementation programmes; and also stronger agricultural and food policies to prioritize healthy diets, the report’s authors conclude.

“Double Burden” Evident Within Households & Among Adults and Children

The Lancet report found that the “double burden” manifests at the national level, household level, and even in individuals at different stages of life.

The combination of overweight mothers with children with stunted growth is the most common form of the double burden seen at the household level, although there is also a trend of children being stunted in their early years, followed by being overweight or obese later in childhood or adulthood.

Diets of children, women and girls is particularly important, notes Popkin, as women’s nutrition in pregnancy has a profound effect on the likelihood of an infant and young childre to suffer from the effects of undernutrition, as well as obesity, later in life.

A child is more likely to face stunting if their mother was undernourished during pregnancy, and likewise, a child is more likely to be overweight or obese if their mother was obese during pregnancy, for example. Meanwhile, overweight or obese adults who were undernourished in childhood may be at even higher risk of non-communicable diseases than those who were consistently overweight from childhood, the study notes.

Children who experience stunting in their first few years of life are also more at risk of becoming overweight or obese – rather than growing taller and lean – if they are subsequently provided with high-energy diets. As a result, classic health sector nutrition programmes that made inroads on stunting and wasting by through supplementation with foods high in fats and carbohydrates – may have inadvertently increased children’s health risks, because the diets were too low in protein, fibres, and micronutrients. 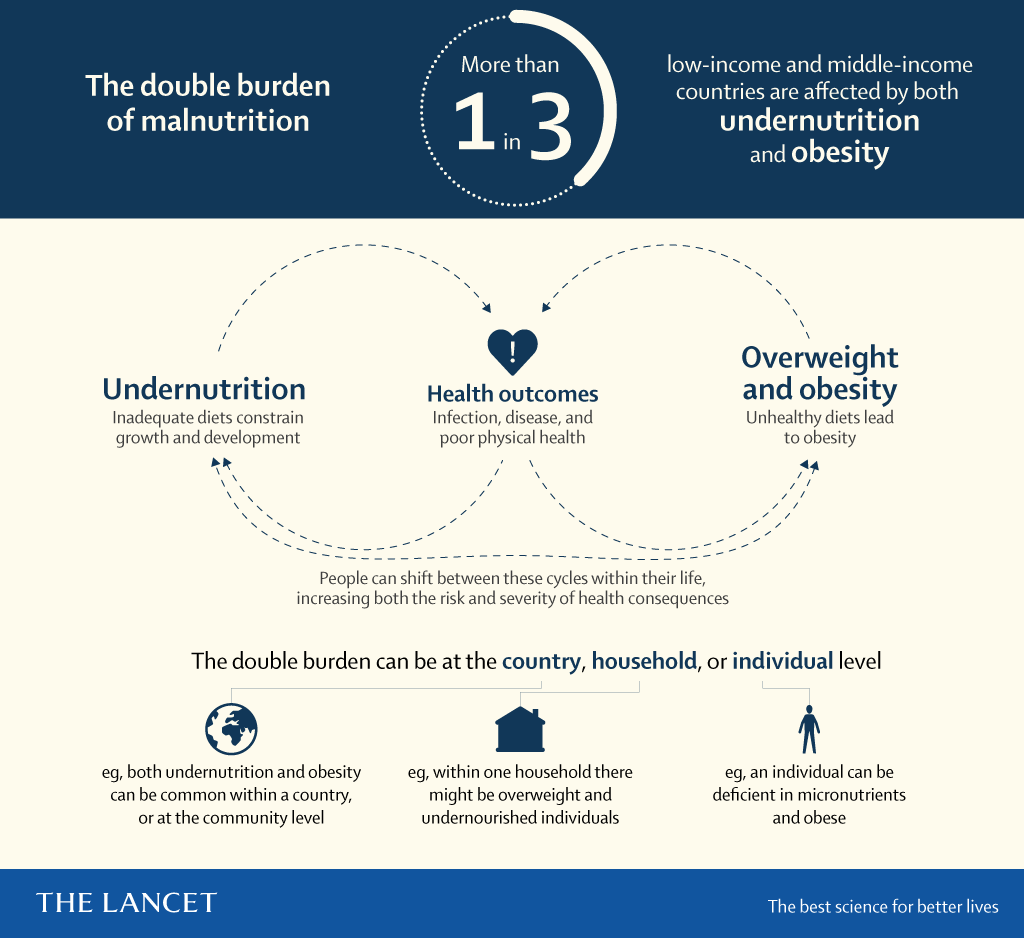 “There are strong biological and environmental linkages, and indeed intergenerational linkages that mean we must take a more coordinated and connected approach towards addressing malnutrition in all its forms,” said Alessandro Demaio at the press briefing, professor in the School of Global Health, University of Copenhagen and senior author on the second paper on the report, which explores the causative factors of individual-level DBM.

“By focusing on undernutrition and food insecurity for so long, nutrition programmes have absolutely allowed, or they have prevented, [the dialogue about] foods high in fats, sugars, and salts from moving center stage. So this means that obesity has grown under the watch of programs designed to target undernutrition,” added Corinna Hawkes in the briefing. Hawkes, a professor at City University in London, is lead author of the third paper in the report, which addresses the actions needed to mitigate both undernutrition and obesity.

However, Hawkes says that the answer is not to disregard undernutrition, which still represents a huge burden of malnutrition around the world, but to “redesign” programmes to reduce undernutrition while also reducing the risk of obesity and diet-related non-communicable diseases.

“The good news is, despite the heavy burden of malnutrition, there are some efficient and effective solutions that actually require some fairly modest redesigning of existing actions which can really be used to tackle this problem effectively,” said Hawkes.

But this will also require stronger policies against market actors who press junk food products on children and vulnerable groups by saying that they are “fortified” with some kind of nutrition, noted Perry at Monday’s launch event, saying, “People are still coming in with solutions that involve fortifying donuts.. that hasn’t gone away.”

The authors propose a series of “double-duty” approaches by the health sector, the agricultural sector as well as school systems and the social welfare sector to simultaneously decrease undernutrition and obesity.

Some of the proposals are actions that the health sector can lead, while others would involve a broader restructuring of agricultural development and food system priorities – to increase incentives for production and promotion of healthier foods, more fresh foods, and more diverse diets.

Currently, economic incentives in low and middle income countries are pushing systems in almost the opposite direction – towards cheaper foods, less diverse foods, and more packaged and processed foods, the studies authors acknowledged.

“It’s an epidemic of systems,” said Perry.  “The reality is that health is not really in the core objectives of the food system.”

“Without a profound food system transformation, the economic, social, and environmental costs of inaction will hinder the growth and development of individuals and societies for decades to come,” said Branca.

Still, the report notes that there are some immediate policy measures that health, education and social welfare sectors could advocate around to initiate changes, including: better labeling of healthy and unhealthy foods, using domestic fiscal policies to support healthy foods production; healthier food procurement for schools; and more systematic restrictions of marketing around junk food.

For its part, Branca said that WHO was working on new guidelines to indicate the optimal proportion of plant-based foods in a healthy diet, and another set of guidelines related to processing of food products – which should help to contribute to more of a whole diet and whole systems approach to nutrition.

For civil society actors, the report’s strong call for fixing food systems is a welcome one.

Katie Dain, chief executive officer of the NCD Alliance, said, “We’ve long known that NCDs are a global health emergency and this report’s stark warning of the consequences of inaction on the double burden of malnutrition may well be the jolting wake-up call that political leaders need.”

“The globalisation of processed junk food has brought us all to this precipice, and getting off it will require swift, coordinated and creative action from a range of decision makers across society who recognise the value in ensuring healthy diets for all in all countries. The costs of ignoring NCD prevention as we tackle all forms of malnutrition will be borne by us all.”

Richard Horton, editor-in-chief of the Lancet and moderator of the launch event, said the study would propel the nutrition research community to embrace a more holistic approach, breaking down the silos between obesity and undernutrition research

“We’ve rather badly separated off obesity from undernutrition, and we will never do that again,” said Horton.