COVID-19 vaccine manufacturers are expected to produce 12 billion doses by the end of the year – almost half made by China – and there could be a vaccine surplus by mid-next year.

In addition, by the end of this month, around 500 million doses should be ready for “redistribution” from wealthy to low-and middle-income countries.

This emerged at a media briefing organised by the International Federation of Pharmaceutical Manufacturers and Associations (IFPMA) on Tuesday.

“By January 2022, there will be sufficient vaccines produced for every adult on every continent,” according to IFPMA.

“Modelling by Airfinity indicates that even if vaccine advisory committees and governments in G7 countries vaccinate teenagers and adults and decide to give boosters to at-risk populations, there would still be over 1.2 billion doses available for redistribution in 2021 alone. This means that each month for the foreseeable year, over 200 million doses would be, with effective planning, available for low- and lower-middle-income countries,” it added. 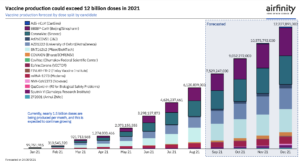 Describing the vaccine production increase as “absolutely extraordinary”, Rasmus Bech Hansen, CEO of research forecast group Airfinity, said that it had been “a surprise to pretty much everyone how fast China has scaled up vaccine production”.

Hansen added that, even when third booster shots for citizens in high-income countries were factored in, Infinity estimated that, “by the end of September, there will be around 500 million doses available in the US, UK, European Union and Canada that could be redistributed” through donations, swaps or reselling.

“In the last G7 summit, one billion doses were pledged [to LMIC] and it actually seems that these stocks will be available by the end of the year so G7 countries could meet those pledges,” he added.

IFPMA Director General Thomas Cueni told the briefing that ‘by June 2022, we expect that we will have more than 24 billion doses of COVID-19 vaccines available”.

“At this point, vaccine supplies may actually outstrip global demand,” added Cueni. “Vaccine manufacturers are now producing 1.5 billion doses per month, and are expected to continue manufacturing at that scale on the basis of the most conservative protection projections.”

Hansen noted that 73% of the production increases were the result of pharmaceutical companies enhancing their in-house capacity, supported by an array of collaboration agreements within the industry – Affinity had counted 231.

Pfizer CEO Dr Albert Bourla said that his company had doubled its production capacity in the past six months and was on track to produce three billion doses by the end of the year, thanks to “sleepless nights, and a lot of effort from thousands of people”.

While it was testing a version of its vaccine that had been tweaked to combat the Delta variant, Bourla said this didn’t seem necessary as the current vaccine is highly efficacious.

One of the key challenges Pfizer faced in scaling up was access to raw material to make it’s mRNA vaccine.

However, in response to a Health Policy Watch question, Bourla dismissed joining the mRNA technology transfer hub established recently in South Africa by the World Health Organization (WHO) to assist Africa to develop its own mRNA vaccines.

“I’m not sure what is the point of transferring technology that it is going to take years to transfer. And, by the way, this is what we do. I’m not sure I understand what they want, to give it someone else to do?” asked Bourla.

Pfizer expects to make four billion doses in 2022, but Bourla but urged all countries to place their vaccine orders as soon as possible.

“We have allocated doses already for this year and frankly, we have allocated a very big part of the doses that we are going to be producing next year also to countries that they have placed orders for these doses,” said Bourla, adding that 41% of this year’s production had been allocated to LMICs.

Bourla said most orders for 2022 were from high-income countries, with boosters fueling demand. While Pfizer would like to allocate at least one billion doses to LMIC for 2022, it had  yet to receive orders for this amount.

“We made a commitment to equitable access and committed by putting a billion doses forward for low and middle-income countries in the next 12 to 18 months,” said Stoffels, adding that over half the company’s vaccines would go to LMICs in the coming year.

“Our strategy of focusing on technology transfer brought us to partnering with Aspen Pharmacare in South Africa. Aspen is now fully in production and we anticipate that all supplies produced by Aspen from now on will go to COVAX countries and African Union. And we are also transferring our technology as we speak to BioE in India,” said Stoffels.

This follows a recent report by The New York Times that Aspen, which has a ‘fill and finish’ contract with J&J, had been exporting millions of vaccines to Europe while lagging behind in its African deliveries. The EU recently agreed to send these vaccines back to South Africa.

However, Stoffels warned that technology transfers are “highly technical by nature and highly complex”.

“We need to work with many partners. Multiple steps are needed, including biological manufacturing, quality testing and release, regulatory inspections and controls. Most critical is the training of workforce and new technologies,” he added.

Cueni reported that “a handful of authorised COVID-19 treatments are becoming standard of care for COVID-19 patients that have been hospitalised and are saving lives”.

Some of the key treatments that have been authorised for emergency use include the anti-viral, Remdesivir (Gilead Sciences), Monoclonal IL-6 blocker, Tocilizumab (Roche), Monoclonal Casirivimab and  Imdevimab (REGEN-COV Roche Regeneron) and Monoclonal Sotrovimab (GlaxoSmithKline).

“Getting the therapeutic rollout right will be important for all countries to be able to benefit from future innovation, such as the anticipated oral outpatient COVID-19 therapeutic candidates,” he added.

Roche has been involved in 10 experimental treatments for COVID-19 “focused on preventing progression to mechanical ventilation and preventing death”– but testing these was complex and difficult, said its CEO, Bill Anderson.

One of these, tocilizumab (Actemra), is a monoclonal antibody that reduces inflammation by blocking the interleukin-6 receptor.

“As it suppresses the immune system, we thought, ‘you don’t want to give it to patients that are newly diagnosed’. It’s really for patients who’ve progressed to a severe illness where their immune system may actually be more doing more damage than good. So we had to run multiple studies. I think we’ve run ultimately, we’ve run seven pivotal studies,” said Anderson, adding that the first pivotal study had failed to show any results.

“Many people thought, well, that’s the answer. But we had seen enough to think, hmm, you know, I don’t think that’s a complete story. And ultimately, we’ve shown that Actemra does decrease need for mechanical ventilation and death quite significantly in hospitalised patients,” he added.

But there are only so many facilities in the world capable of producing monoclonal antibodies, said Anderson, and the treatments needed large quantities.

“We ultimately did a partnership with Regeneron, which is a company that we compete with in many other fields, but we felt like they were farthest along,” added Anderson.

“We made an exceptional decision that we would not assert patent rights if companies could make a product of a biosimilar to Actemra and deliver it to LMICs, and that, in fact, it looks to be happening,” he added.

However, Anderson added that Roche was only prepared to support technology transfer to companies with the capacity to produce large amounts of monoclonal antibodies.

“Tech transfer is very laborious, and we can’t afford to take our people that are producing Actemra and that are also doing tech transfer with the existing external contracts, unless we have somebody who can produce large quantities.”