Life expectancy increased to a historic peak of 68 years for men and 78 years for women in the Russian Federation in 2018 thanks in part to stringent alcohol regulations. A new study published by the World Health Organization’s European Regional Office found that alcohol regulations in the country reduced consumption by more than 40% and could be linked to declines seen in deaths from alcohol-related disorders, homicides, and transport accidents between 2003 to 2018.

“These results show that measures such as the introduction of monitoring systems, price increases and limited alcohol availability, work to save lives and health system costs”, said Carina Ferreira-Borges, from the Alcohol and Illicit Drugs programme at WHO Europe said in a press release.

During “Russia’s mortality crisis” of the 1990s and early 2000s, one out of every two young men died prematurely due to alcohol. The Russian Federation made key moves to regulate alcohol production and consumption between the early 1990s to 2011. The most effective reforms began in 2005/06, after reforms attempting to reduce the proportion of unrecorded or “illegal” alcohol were introduced. Individual behavior was targeted beginning in 2009, when Russia began implementing its first national strategy focused on reducing the harmful use of alcohol and alcohol dependence, which included strategies such as raising taxes on alcohol, introducing alcohol-free public spaces, and real-time tracking of alcohol production and sales. 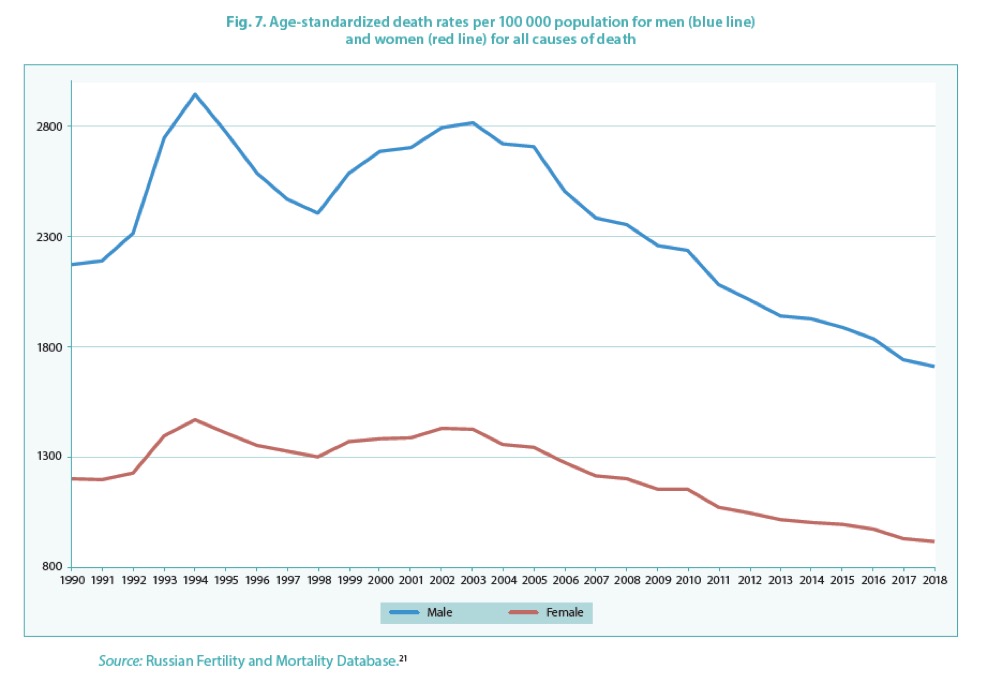 As a result, alcohol poisoning mortality has dropped by 73% in men and 78% in women, morbidity from alcohol related psychosis has dropped by 64%, and mortality from alcohol-related liver diseases has decreased by 22% in men and 24% in women between 2003 to 2018. However, the report was unable to clearly measure the effect of alcohol regulations on the incidence of alcohol-related cancers, as cancer takes decades to develop and gains will only be seen years down the line if regulation continues.

Deaths attributable to alcohol-linked causes such as heart disease, traffic accidents, suicides and homicides also dropped between 2003 and 2017, with mortality due to heart disease and transport accidents slashed in half, and suicide and homicide deaths dropping by around 60% and 80% respectively.

While the report notes that other factors such as abrupt economic changes, malnutrition, smoking, and a deterioration of social services may have helped lead to the sharp decline in life expectancy observed in the early 1990s, alcohol regulation, or the lack thereof, has played a key role in the dramatic health changes in the Russian population.

Notably, the authors found that growth in life-expectancy flattened in 2015, when major alcohol regulations were temporarily discarded. Since 2016, Russian policy-makers have attempted to mainstream alcohol control into many health and development policies, recognizing its role as a key risk factor for a variety of poor health and socioeconomic outcomes.

Still, the analysis shows that alcohol consumption has stagnated at about 11-12 litres of pure ethanol per person per year, which remains one of the highest consumption levels worldwide. Tackling individual drinking behaviors remains a key challenge in the future.