Amid huge global contestation over abortion, the Kenyan High Court recently affirmed that women’s “access to safe abortion services is a human right” as enshrined in the country’s Constitution, and directed parliament to enact laws in this regard.

Malindi High Court Judge Reuben Nyakundi made the ruling late last month in a case involving a 16-year-old girl who had been miscarrying, and the health worker who had treated her. The two, arrested in 2019 and charged with “procuring an abortion”, had petitioned the court to have their charges dropped.

It also came shortly before the United Nations Population Fund (UNFPA) released its 2022 State of the World Population Report, which indicated that almost half of global pregnancies were unintended and failure to address this was a “public health emergency”.

According to Article 26.4 of Kenya’s 2010 constitution, abortion is prohibited “unless, in the opinion of a trained health professional, there is a need for emergency treatment or the life or health of the mother is in danger, or if permitted by any other written law”.

The Sexual Offences Act also allows women and girls who have fallen pregnant as a result of rape to have abortions. However, an outdated 1963 penal code outlaws all forms of abortion in contradiction of the constitution.

Over the past few years, conservatives have mobilised against any legalisation of abortion for any reason in Kenya, and the issue is increasingly becoming a populist rallying point ahead of the national elections in August.

It has thus become more difficult for women and girls to terminate pregnancies – even within the narrow confines allowed.

In the Malindi case, the girl identified only as PAK and clinical officer Salim Mohammed were arrested two days after PAK had presented with a spontaneous abortion and Mohammed had given her a manual vacuum evacuation.

Police had removed PAK from her hospital bed, confiscated her medical records and forced her to have a medical examination. PAK was then detained in a juvenile facility for over a month while trying to raise bail. Kenyan authorities also notified her school of the criminal proceedings against her and had even sought to have her taken away from her parents and put into a children’s home.

Meanwhile, Mohammed was imprisoned for a week and two cleaners at the health facility were also arrested.

As Kenya’s Constitution also affirms “the right to life”, conservatives have brandished this right against that of legal abortion.

However, Nyakundi ruled that “forcing someone to carry an unwanted pregnancy to term, or forcing them to seek out an unsafe abortion, is a violation of their human rights, including the rights to privacy and bodily autonomy”.

“Inaccessibility of quality abortion care risks violating a range of human rights of women and girls, including the right to life; the right to the highest attainable standard of physical and mental health; the right to benefit from scientific progress and its realization; the right to decide freely and responsibly on the number, spacing and timing of children; and the right to be free from torture, cruel, inhuman and degrading treatment and punishment,” Nyakundi ruled.

“Restrictive abortion laws coupled with lack of effective laws giving effect to Article 26(4) of the Constitution, exposes women and girls to mental and physical health risks that are often associated with unsafe abortion and stigmatizes women and girls who seek abortion thereby violating their right to life and the right to highest attainable standards of health,” he added. 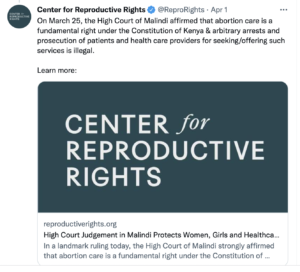 Nyakundi directed parliament to “fast track legislation that provides for access to safe abortion for women in Kenya and to actualize the provisions of Article 26(4) of the Constitution”.

Evelyne Opondo, Africa Regional Director at Center for Reproductive Rights, which assisted with PAK and Mohammed’s legal representation, described the court ruling as a “victory is for all women, girls, and healthcare providers who have been treated as criminals for seeking and providing abortion care”.

“The court has vindicated our position by affirming that forcing a woman to carry an unwanted pregnancy to term or to seek out an unsafe abortion is a gross violation of her rights to privacy and bodily autonomy. Further, the continued restrictive abortion laws inhibit quality improvement possible to protect women with unintended pregnancies.”

“Many qualified reproductive healthcare practitioners continue to be arrested, detained, and prosecuted for providing legal medical care,” according to Munyasia.

Kenyan MPs Susan Kihika and Esther Passaris have faced significant opposition to the Reproductive Health Bill that they introduced in the Kenyan parliament in late 2019, which sought to clarify grounds for abortion.

In mid-2020, the Kenyan Health Ministry withdrew the Bill, describing it as “fundamentally defective” because it made provision for abortion.

At a Senate hearing on the Bill in August 2020, Mercy Mwangangi, the health ministry’s Chief Administrative Secretary (CAS) told Kenya’s Senate committee on Health, that the Bill “normalises abortion on demand contrary to the Constitution and the values of the country”.

The Bill has since been withdrawn – apparently to allow for more public comment.

However, a recent expose by Modzilla Academy Fellow Odanga Madung found that CitizenGo, the right-wing campaigning organisation started  in Spain, had paid a number of anonymous “influencers” to spread misinformation about abortion, and attack Kihika and Passaris, on Twitter during crucial hearings on with the Bill.

“The research reveals how a right-wing European organization used Twitter to insert disinformation and inflammatory rhetoric into an important and nuanced regional conversation,” said Odanga. “It also reveals how Twitter lacks the cultural context, the staff, and the will to confront this problem.”

Meanwhile, CitizenGo has since indicated it will appeal the Malindi ruling.

However, Irungu Houghton, Amnesty International’s Kenya Director, has appealed to Kenyan polcymakers to “consider how to provide comprehensive sex education, safe abortion and post-abortion care services for those that require them.”

“If there is one lesson from the spiking numbers of unwanted pregnancies, it must be that turning a blind eye to the high levels of sexual violence or criminalising teenage sex doesn’t work.

Half the world’s pregnancies are ‘unintended’

Last week, the United Nations Population Fund (UNFPA) released its 2022 State of the World Population Report which indicated that almost half of pregnancies were unintended – and that 60% of these ended in abortion, often in unsafe circumstances.

“We know the steep costs associated with unintended pregnancy — costs to an individual’s health, education and future, costs to whole health systems, workforces and societies. The question is: why has this not inspired more action to secure bodily autonomy for all?” asked UNFPA Executive Director  Dr Natalia Kanem in the report’s introduction.

“Unsafe abortion is one of the leading causes of the more than 800 maternal deaths occurring each day. This is a price tag the world simply cannot afford,” she added.

The UNFPA report estimated that there are around 121 million unintended pregnancies every year, or 331,000 per day.

“Over 60% of unintended pregnancies end in abortion, safe or unsafe, legal or illegal . Given that an estimated 45% of all abortions remain unsafe, this is a public health emergency.”