Three of India’s leading environmental websites, including Fridays For Future – India, part of the climate youth movement founded by Sweden’s Greta Thunberg, were blocked this week by Delhi police – after they protested a pending revision in the country’s environmental rules that would pave the way for polluting industries to mount projects without public hearings or appeals.

Late Thursday evening, the Indian police withdrew some of their initial allegations that the Fridays for Future group violated anti-terror laws, eventually allowing it and a second site, LetIndiaBreathe, to resume operations.  But a third Indian environmental site, There Is No Earth B, remained in a blackout Friday evening, even though it had never received any police warning. Meanwhile, environmental advocates expressed worries about the wider implications of the media censorship.

“Government muzzles young environmental voices in India,” said Greta Thunberg Thursday in a retweeted post by India’s Fridays For Future (FFF), protesting the crackdown. “Youth environmental movement @FFFIndia slapped with bizarre allegations by authorities &silenced by digital censorship for facilitating ‘too many emails’ to the MOEFCC.” 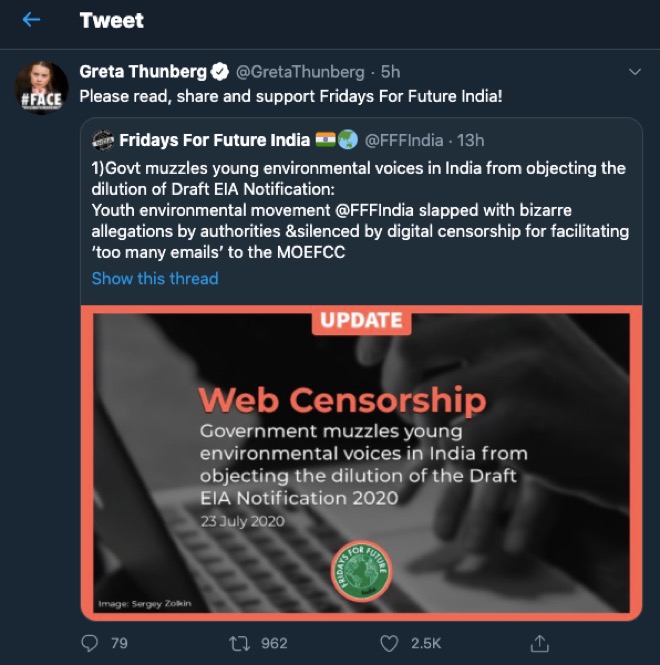 The saga began in early July, when Fridays For Future’s internet service provider was sent notices by New Delhi’s Cyber Crime division after the environmental activist group had posted stories and launched email campaigns protesting the hotly debated revisions in the country’s Environmental Impact Assessment (EIA), which would limit or even cancel opportunities for the public to review and object to new industrial projects potentially harmful to health and the environment.  On the other hand, There Is No Earth B, never received a notice in the first place, organizers told Health Policy Watch.

The proposed loosening of EIA rules comes as India faces mounting criticism for fueling its post-pandemic recovery with dirty energy by auctioning off 41 Indian coal mines to private investors for the first time ever, in moves announced last month.

Observers called it a significant repression of media freedoms in one of the world’s largest democracies. They said it has been orchestrated by the powerful Minister of Industry, Prakash Javadekar, who is also Minister of Environment as well as the Minister of Public Information and Broadcasting.

They said the new rules would open the way for mining and industrial projects to pour even more pollution into India’s chronically dirty skies and rivers in a country where air pollution killed some 1.2 million people a year in 2017, according to a study in The Lancet, and reduces life expectancy by an average 2.6 years, according to India’s Center for Science and Environment.

Industry, Environment and Media Portfolios Concentrated in Hands of One Minister

She attributed the media crackdown to the concentration of industry, environment and media portfolio into the hands of just one minister.

“The Environment minister is the same as the heavy industries minister, who is the same as the information and broadcasting minister – one man – Prakash Javadekar,” said Pande Lavakare. “So there is a direct conflict here. As industry minister, he wants faster approvals for projects especially now when India is staring at a recession. As information and broadcasting minister, media is afraid to call him out on the environmental front.” 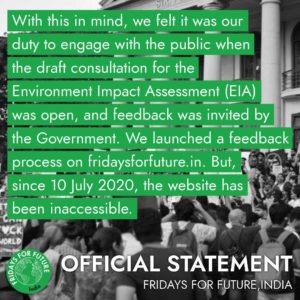 “The above website [FFF] depicts objectionable contents and unlawful activities or terrorist acts, which are dangerous for the peace, tranquility and sovereignty of India.”

“It is requested that you may take necessary action [block FFF’s website] in this regard and send us a report immediately.”

Said India’s FFF branch in response to the crackdown: “Our movement is based on peaceful protests…It’s a shock to know that our dissent has been reduced to ‘being illegal’ with our site being censored.”

Others added that civil society is “simply carrying out its duty” to compensate for the government’s failure to protect its citizens.

“The Indian Constitution’s Article 51-A (g), says that ‘It shall be duty of every citizen of India to protect and improve the natural environment’ including forests, lakes, rivers & wild life & to have compassion for living creatures.”

“The authorities have repeatedly failed and it’s imperative now that we hold them accountable and demand action”, said There Is No Earth B.

This story was modified on July 24 as two of the websites were partiallly restored, though it is stll unclear whether the website of ThereIsNoEarthB is back online, according to Indian reporting agency Newslaundry.