Some 4.4% of the world’s climate emissions are from health care activities – meaning that if health care was a country, it would rank as the world’s fifth largest emitter in absolute terms – after the United States, China, India and Russia, but ahead of Japan and Brazil.

This is the key finding from a first-ever global report on climate emissions from health care, launched Tuesday by Health Care Without Harm (HCWH), an international NGO devoted to “greening” the health sector for the benefit of patients, health workers  – and the environment.

The report, Health care’s climate footprint: How the health sector contributes to the global climate crisis and opportunities for action, also found that the US health care sector is by far, the largest aggregate and per capita emitter – with a whopping 27% percent of the world’s total healthcare-related emissions, or 1.2 tons of CO2 equivalent per capita (tCO2e). That is 57 times more emissions per person than India, which has the lowest per capita emissions of the 43 developed and emerging economies, where detailed data was available for the report.

In absolute terms, China takes second place with 17% of emissions, and the European Union third place, with 12% of the world’s healthcare footprint. That is followed by Japan (5%), Russia (4%) and then Brazil, India, South Korea and Australia (2% each). Emissions from the rest of the world amount to no more than a quarter of the global total. The total climate footprint of the healthcare sector is estimated at 2 gigatons of CO2 equivalent emissions a year.

The report’s launch comes just two weeks ahead of the planned UN Secretary General’s Climate Summit in New York City (23 September), and the study clearly takes aim at the much-discussed target for limiting global temperature rise to 1.5°C, saying that healthcare needs to do more of its share.

“Hospitals and health care systems paradoxically make a major contribution to the climate crisis,” said Josh Karliner, a lead author of the report as well as HCWH’s International Director of Programs and Strategy. “Healthcare has to step up and do its part to avoid catastrophic climate change, which would be devastating to human health worldwide.” 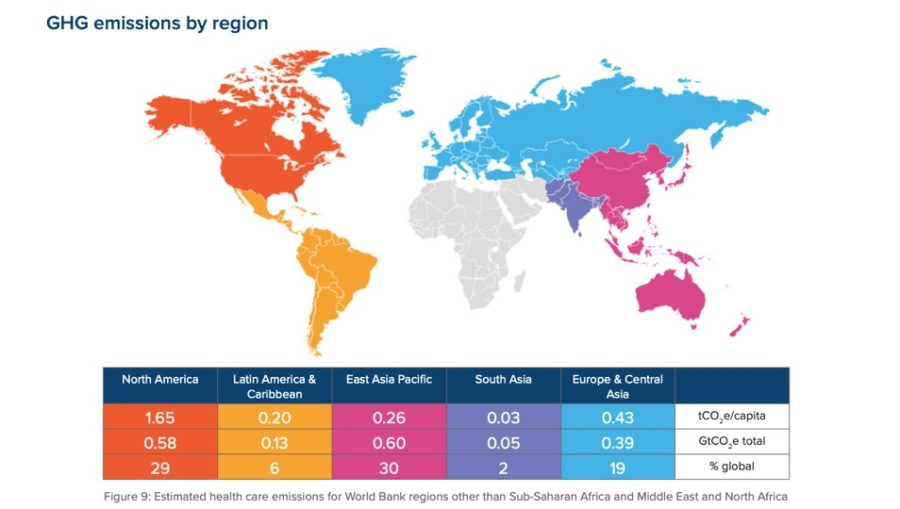 In line with that message, the also report outlines recommendations for areas where the health care sector could rapidly “decarbonize” including:

The report stresses that the health care sector remains dependent on energy supplies from national grids. “With 10% of health care facilities’ climate footprint coming from purchased energy, and with a large amount of the supply chain also consuming grid energy, decarbonization of national energy systems is essential to move health care to net zero emissions. “

However, low-carbon approaches to health care can be a win-win, fostering more equitable access to health care, and addressing health and safety risks that affect patients, health workers and the communities. For instance, some health-care facilities in low-income countries have developed their own renewable energy resources, which can provide power for health services more reliably, avoiding life-threatening interruptions in electricity supply.

“In energy-poor settings, powering health care with low-carbon solutions can enhance access to care, contributing to the advancement of universal health care for the poor and most vulnerable,” the report concludes.

The study took a “cradle to grave” approach to the assessment, estimating emissions associated with everything from the procurement of chemicals and pharmaceuticals as well as rubber, cotton and plastic healthcare products to building design and energy management, transport, and waste. Key findings were:

Along with other chemicals, anaesthetic gases, including nitrous oxide and the fluorinated gases sevoflurane, isoflurane, and desflurane, are an unexplored source of health-care emissions, the report notes. Their Global Warming Potentials range between 130 kgCO2e/kg (sevoflurane) and 2540 kgCO2e/kg (desflurane), the report notes. At present, the majority of these gases enter the atmosphere. 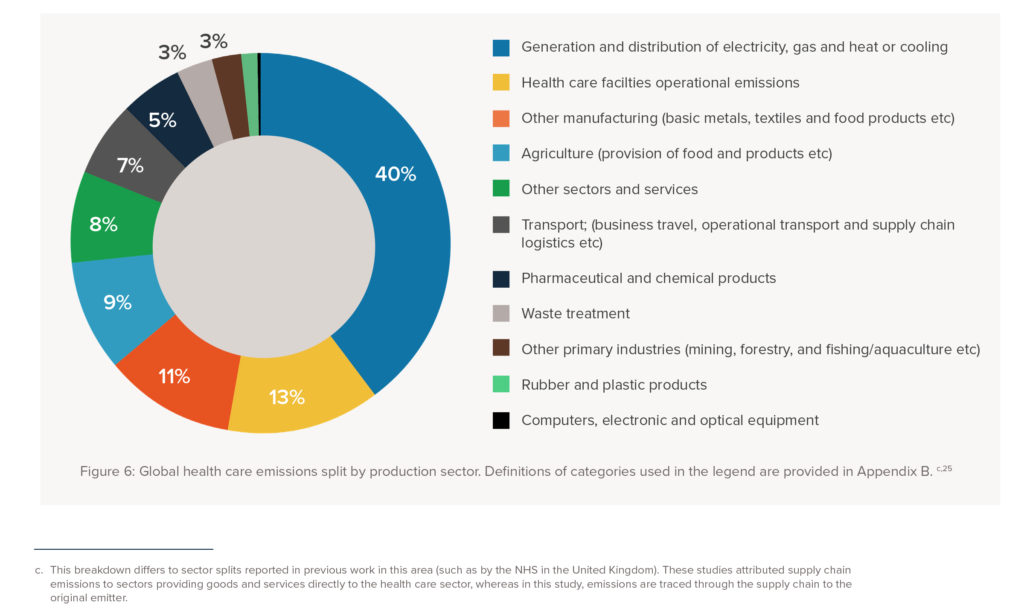 The report is built upon earlier studies of health sector emissions at national level; a 2017 study by HCWH and the World Bank, which provided a rough estimate of 5% of global emissions due to health care activities in 2011; and a 2018 study of Organisation for Economic Cooperation and Development (OECD) countries, plus India and China. That study estimated that health care activities in the 36 countries sampled was responsible for 1.6 GtCO2e emissions or 4.4% of the total emissions from these nations in 2014.

However, this report claims to establish the first detailed estimate – going further in terms of the number of countries covered, as well as estimates of emissions from various activities. It also draws from the global World Input-Output Database (WIOD) database, to come up with initial estimates for emissions for low- and lower-middle income countries where data remains scarce.

“Health care must respond to the growing climate emergency not only by treating those made ill, injured, or dying from the climate crisis, but also by practicing primary prevention and radically reducing its own emissions,” said Karliner, of the report’s aim.

As part of that response, Health Care Without Harm has launched a Health Care Climate Challenge which some 200 institutions, representing the interests of over 18,000 health facilities in 31 countries, have joined. Collectively, they have made commitments to reduce their carbon emissions by more than 34.2 million metric tons of CO2e. To date, Karliner says, the network has collectively reduced over 6.8 million metric tons of CO2e. The corresponding energy efficiency upgrades and renewable energy generation improvements have saved the partner institutions over US$394 million.

“The good news is that there are hospitals and health systems all around the world leading by example and implementing climate-smart health care strategies.”