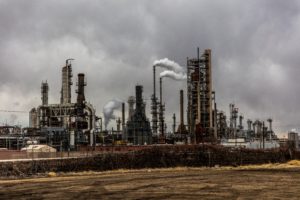 Nearly half the world’s population lives in climate danger zones, according to the latest United Nations Intergovernmental Panel on Climate Change (IPCC) report, which UN Secretary-General Antonio Guterres described as “an atlas of human suffering and a damning indictment on failed climate change leadership”.

“Many ecosystems are at the point of no return now, and unchecked carbon pollution is forcing the world’s most vulnerable on a frogmarched to destruction now,” added Guterres at Monday’s launch of the report, which focuses on climate impact, adaptation and vulnerability.

“Increased heatwaves, droughts and floods are already exceeding plants’ and animals’ tolerance thresholds, driving mass mortalities in species such as trees and corals,” according to the report, compiled by 270 scientists from 67 countries.

With more than half of the world’s population living in cities, “people’s health, lives and livelihoods, as well as property and critical infrastructure, including energy and transportation systems, are being increasingly adversely affected by hazards from heatwaves, storms, drought and flooding as well as slow-onset changes, including sea level rise,” according to the report.

“These weather extremes are occurring simultaneously, causing cascading impacts that are increasingly difficult to manage. They have exposed millions of people to acute food and water insecurity, especially in Africa, Asia, Central and South America, on Small Islands and in the Arctic.”

The extent and magnitude of climate change impacts “are larger than estimated in previous assessments”, and the substantial damage is “increasingly irreversible”, according to the report.

Meanwhile, around half of the species assessed globally had shifted polewards or to higher elevations, while hundreds of local species losses were driven by heat extremes.

Even temporarily exceeding global warming of 1.5°C (2.7°F) will result in additional severe impacts, some of which will be irreversible, warns the report.

“This report is a dire warning about the consequences of inaction,” said Hoesung Lee, Chair of the IPCC. “It shows that climate change is a grave and mounting threat to our wellbeing and a healthy planet. Our actions today will shape how people adapt and nature responds to increasing climate risks.”

Dr Hans-Otto Pörtner, co-chair of IPCC Working Group 2 that co-ordinated the report, called for an end to fossil fuel subsidies driving the heating up of the world. On the brighter side of a grim conflict, he suggested that Russia’s invasion of Ukraine, which has led to the suspension of the Nord Stream 2 natural gas pipeline to Europe, may also accelerate countries’ impetus to move to renewable energy to “avoid dependence on fossil fuels, especially during conflict”.

Petteri Taalas, Secretary-General of the World Meteorological Organisation (WMO), described the world’s atmosphere as being “on steroids, doped with fossil fuels”, adding that the report had identified 127 risks “covering a very wide range of sectors like health, agriculture, economy, infrastructure, and ecosystems”.

Meanwhile, Guterres said that coal and other fossil fuels “are choking humanity”, adding that only 20 governments had agreed to stop funding the development of new coal production plants abroad.

“They must now urgently do the same at home and dismantle their coal fleets,” he added. “Those in the private sector still financing coal must be held to account. Oil and gas giants and their underwriters also must be put on notice. You cannot claim to be green while your plans and projects undermined the 2050 net-zero target and ignore the major emission cuts that must occur this decade,” said Guterres. 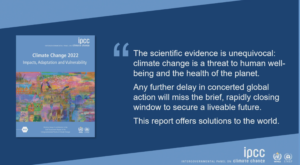 Just as human society causes climate change, so it can “adapt to, maladapt and mitigate climate change”, according to the report.

Solutions involve strengthening nature, which has the potential to reduce the impact of climate change.

“Healthy ecosystems are more resilient to climate change and provide life-critical services such as food and clean water”, said  Pörtner.

“By restoring degraded ecosystems and effectively and equitably conserving 30 – 50% of earth’s land, freshwater and ocean habitats, society can benefit from nature’s capacity to absorb and store carbon, and we can accelerate progress towards sustainable development, but adequate finance and political support are essential.”

Cities as a nexus of crisis and opportunities

The report also points out that climate change interacts with global trends such as growing urbanization, social inequalities, losses and damages from extreme events and a pandemic, jeopardizing future development.

She added that some adaptation has caused “unintended consequences”, including by destroying nature, putting peoples’ lives at risk or increasing greenhouse gas emissions. “This can be avoided by involving everyone in planning, attention to equity and justice, and drawing on Indigenous and local knowledge,” said Roberts, urging governments, the private sector, civil society to work together to “prioritize risk reduction, as well as equity and justice, in decision-making and investment”.

“In this way, different interests, values and world views can be reconciled. By bringing together scientific and technological know-how as well as Indigenous and local knowledge, solutions will be more effective. Failure to achieve climate-resilient and sustainable development will result in a sub-optimal future for people and nature.”

“One of the powerful ways to adapt is to invest in early warning services,” said the WMO’s Taalas. “But the basic weather and climate observing networks have serious gaps in Africa and Small Island States. Only half of the 193 members of WMO have proper weather, climate and hydrological services.”

“This report recognises the interdependence of climate, biodiversity and people and integrates natural, social and economic sciences more strongly than earlier IPCC assessments,” said Hoesung Lee. “It emphasises the urgency of immediate and more ambitious action to address climate risks. Half measures are no longer an option.”