Against the backdrop of Thursday’s G-20 Health and Finance Ministers meeting on the COVID-19 pandemic, UN and Global health leaders were escalating their pleas to the world’s industrialized countries and global financial institutions for billions of dollars in immediate funding to fight the COVID-19 pandemic.

The calls echoed statements issued earlier this week by the World Health Organization and UN Sectretary General Antonio Guterres – to the effect that the world needs some US$ 35 billion to ensure wide global access to vaccines, tests and treatments – without which pandemic containment may be impossible.

The sense of urgency was growing as WHO said that Europe was facing a worrisome surge in cases – “weekly cases have now exceeded those reported when the pandemic first peaked in Europe in March,” said the WHO’s Regional Director for Europe, Hans Kluge, at a press briefing on Thursday.

Speaking at the virtual G-20 meeting, hosted by Saudi Arabia, European Commissioner of Health and Food Safety, Stella Kyriakides called upon the world’s most industrialized countries to create new financial mechanisms to raise the funds – including some €15 billion that is needed almost immediately.

‘Think out of the Box’, Urges EC Health Commissioner

While welcoming the G-20 statement of support for a coordinated global pandemic response, she emphasized that world leaders need to commit to more than declarations in order to make a real difference.

“More funding is needed to speed up the development, manufacturing and distribution of COVID 19 diagnostics, therapeutics and vaccines,” Kyriakides said in her published remarks.

“The UN tells us about a budget shortfall of €35 billion for the ACT-Accelerator, of which €15 billion will be needed in the next three months,” she said referring to the WHO-co-sponsored Access to COVID-19 Tools (ACT) Accelerator, which aims to raise funding to produce and equitably distribute two billion vaccine doses, 245 million treatments and 500 million tests.

“We, as G20, must develop a vision to attract new funding by thinking outside the box. What about a private fund to which the pharmaceutical industry, or philanthropic organisations could contribute? Or a crowd funding initiative? Let us work on creative solutions to keep the momentum and bring an end to COVID-19.”

Similar notes of worry and warning were sounded among philanthropies such as the Wellcome Trust, which has invested millions into R&D support for new Covid vaccines and treatments.

Said Wellcome Trust Ddirector Jeremy Farrar on Thursday. “we’re running out of time and these warm words must urgently turn into the real investment and global leadership that is needed.

“The ACT-Accelerator urgently needs $35 billion to develop and provide tests, treatments and vaccines for the world and to have the health systems to deliver them,” said Farrar. ” So far, less than 10% of this been raised. $35 billion is a tiny figure when compared to the trillions the world economy has already lost and will continue to lose as this pandemic continues to reverberate around the world.

“Securing this funding now will prove to be the wisest investment humanity has ever made. Putting it off will only prolong the pandemic and all its dreadful consequences. The actions leaders take today will affect how the world spends the next decade. This needs a moment of historic political and financial leadership.  Leadership that will change the world.  Leadership that will be remembered in a 100 years’ time. But we need it now through actions not words.”

The G-20 Health and Finance Ministers’ statement, issued at the close of today’s virtual meeting, expressed strong support for the global pooling efforts, even noting them explicitly by name as the “Access to COVID-19 Tools Accelerator and its COVAX [vaccine pool] facility.”

“We recognise the role of extensive immunization against COVID-19 as a global public good for health in preventing, containing, and stopping transmission,” said the ministerial statement.

But the finance leaders of the world’s most powerful nations made no further commitments that their countries would cough up more funds directly, saying only that they supported “further voluntary contributions to relevant initiatives, organizations and financing platforms”.

In his keynote address to the UN General Assembly on Tuesday, UN Secretary-General António Guterres appealed for “a quantum leap in funding”  for the Acces to COVID-19 Tools (ACT) Accelerator, the WHO-co-sponsored funding mechanism which aims to pool capital to finance equitable global distribution of new COVID vaccines, tests and treatments.

“We now need $35 billion more to go from set-up to scale and impact. There is a real urgency in these numbers. Without an infusion of $15 billion over the next three months, beginning immediately, we will lose the window of opportunity”, he warned.

According to the latest data, the ACT Accelerator has received only US$2.7 billion of the hoped-for US$35 billion – although some 170 countries have made commitments in principle to pooling vaccine or treatment resources through the “COVAX” vaccine and tools treatment pools.

Meanwhile, the global economy is expected to contract by trillions of dollars this year.  “Fully financing the ACT-Accelerator would shorten the pandemic and pay back this investment rapidly as the global economy recovers”, said Gutteres in his remarks to the UN GA.

One note of progress last week came as the WHO announced a “Facilitation Council” for the ACT-Accelerator pools, co-chaired by South African President Cyril Ramaphosa and Norway’s Prime Minister, Erna Solberg.

But the thorny work of a legal framework under which the Act Accelerator’s “COVAX” vaccine pool would operate is yet to be completed, sources have told Health Policy Watch. And this is needed in order to satisfy a wide range of  national regulatory rules and requirements that would allow high- and middle-income countries to “join” the pool voluntarily, effectively committing funds to pay in advance for vaccines produced later, is yet to be finalized.  Another track of funding would support the vaccine needs of low-income countries, through overseas development assistance. However, traditional ODA mechanisms, which were designed to provide assistance on the order of “millions” of dollars, are ill-suited to generate the billions now needed for a truly world-wide COVID-19 vaccine effort, seasoned observers say. 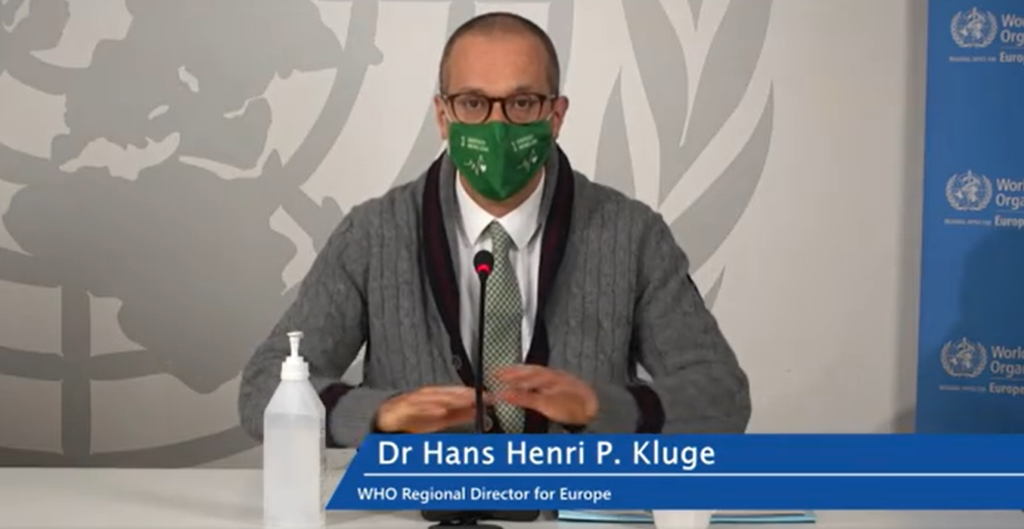 In the WHO/Europe media briefing today, Kluge declared: “We do have a very serious situation unfolding before us. More than half of European countries have reported a greater than 10% increases in cases in the past two weeks. Of those, seven countries have seen newly reported cases increase more than two-fold in the same period,” he said.

“In the spring and early summer we were able to see the impact of strict lockdown measures. Our efforts, our sacrifices, paid off. In June cases hit an all-time low. The September case numbers, however, should serve as a wake-up call for all of us,” he said.
“Although these numbers reflect more comprehensive testing, it also shows alarming rates of transmission across the region,” he continued. “While we did see an increase in cases among older age groups, 50 to 64 and 65 to 79 years, in the first week of September, the biggest proportion of new cases is still among 25- to 49-year-olds.”
“This pandemic has taken so much from us,” Kluge said, referring to the fact that the region has already seen nearly 4.9 million Covid-19 and more than 226,000 deaths. “And this tells only part of the story,” he said. “The impact on our mental health, economies, livelihoods and society has been monumental.”

In response to the resurgence, a growing swathe countries across the 53-member-state region, which had been easing lockdowns and reopening their economies, are now pulling back and implementing new restrictions and quarantine measures.

New hotspots have been declared and restrictions imposed in countries and cities across the region that had gotten the virus under good control in early June and July – from the northeast of England to Paris, Lyon and Nice in France; Germany’s Bavaria region; as well as Spain’s Madrid, and even Italy.

Travelers arriving from many central and southern European countries such as Greece, Croatia and the Czech Republic, which saw relatively few cases in the first wave and had thus become particularly popular European tourism destinations over the summer after EU borders reopened, have now been slapped back onto the quarantine list of certain other European countries and the United Kingdom.  Cases are also rising steadily in Switzerland, where new cases have risen from a few dozen a day as the lockdown was lifted in June to over 500 new cases a day presently – placing it in the “red” list category of some other Euroepan countries as well – although borders with neighboring France and Italy have remained open to passage by cross-border workers without quarantine requirements.

Kluge called for more coherent regional efforts, saying “the response to the crisis has been very effective whenever the actions were prompt and resolute, but the virus has shown merciless whenever partisanship and disinformation prevailed.  Where the pandemic goes from here, is in our hands. We have fought it back before and we can fight it back again.”

He also said that countries need to find ways to combat the pandemic “fatigue that is now setting in.”