Over 90% of appeals for urgent hunger-related funding made through the United Nations humanitarian system were not fully funded in 2021, according to a report produced by Action Against Hunger.

While global funding has increased by 233% over the past decade, overall humanitarian needs are up 500%.

“This means that 42% fewer UN appeals are being fulfilled,” the report stated.

In an analysis of the response to ‘crisis’ levels of hunger experienced in 2020 in 13 countries, less than 8% of food security appeals were fully funded while none of the appeals for support of water, sanitation, and hygiene (WASH) programs were fully funded.

Moreover, more than six out of ten of hunger-related appeals were not even funded to the halfway point while countries that experienced the greatest hunger crises received less hunger funding (by percentage of appeals filled) than countries with half the rate of hunger. 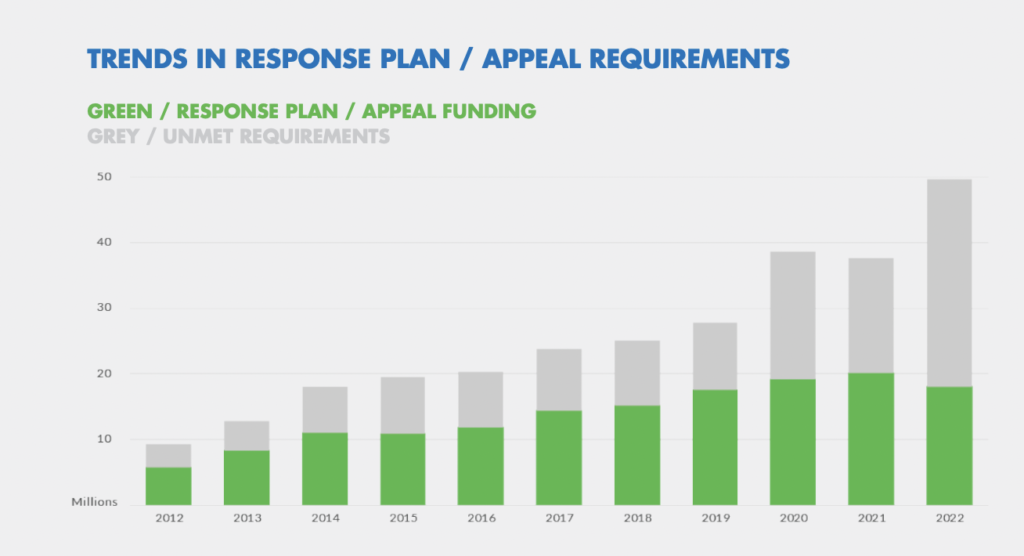 Michelle Brown, Action Against Hunger USA’s advocacy director, described the findings as alarming and called on the global community for more funding to combat hunger, especially in places where the crises are severe.

“While donors have increased their funding, they haven’t increased their funding to the necessary level to actually meet all of those needs,” Brown told Health Policy Watch. “As needs continue to go up, humanitarian funding continues to go up as well but not at the same level. We’re seeing a really significant gap between what the needs are and what the funding levels are.”

Moreover, she said the report did not take into account the impact of the Ukraine crisis on food prices and the humanitarian response: “What we’re going to see are even greater levels of need, and for similar funding levels that aren’t able to meet those needs.”

It is still possible to end hunger in our lifetimes

In spite of the burgeoning hunger-related crisis and the worsening risks posed by conflicts and climate change, the report notes that it is still possible to end hunger “in our lifetimes”. This, it said, is based on a number of factors including progress made so far.

Currently, about 828 million people (one in ten worldwide) are undernourished and 50 million people in 45 countries are on the verge of famine, yet between 2005 and 2014, the number of undernourished people dropped from 806 million to 572 million. This represents a reduction of nearly 30% within the period alone.

The report also noted that the world has enough food and funding to meet the UN Global Goal of Zero Hunger by 2030. But it warned that this goal cannot be achieved without closing the hunger funding gap.

“We have the ability and we have the compassion that’s needed to finally solve hunger. Right now, especially when you look at what’s happening in East Africa, the needs are enormous and we have an opportunity to save lives. We’ve seen in the past that humanitarian assistance can save lives, it can prevent a famine and…this time around, [we need] to ensure that we don’t find ourselves in a famine situation,” Brown told Health Policy Watch.