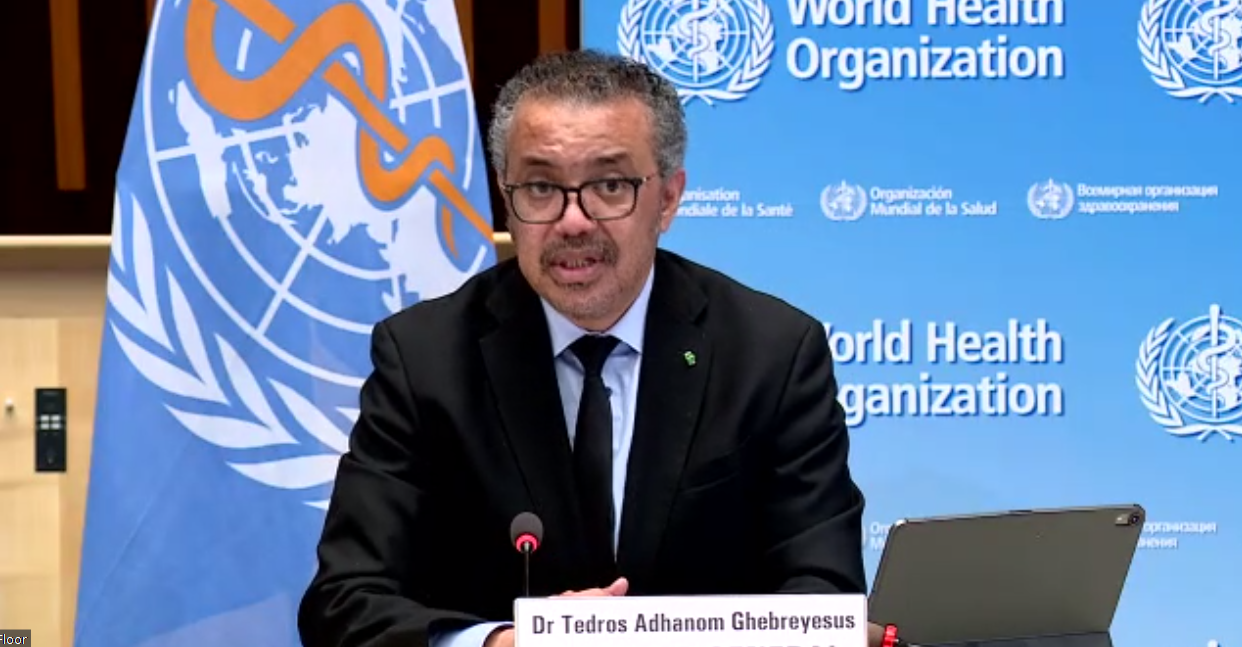 WHO’s Director General Dr Tedros Adhanom Ghebryesus called on leaders of the  G7 Group of the world’s most industrialized nations to share at least 100 million more COVID-19 vaccine doses with low- and middle-income countries in June and July and 250 million doses by September.

His appeal, at a WHO press conference Monday,  added to the growing chorus of voices being directed at G7 leaders to step up donations of vaccines and funding – when they meet this coming weekend in Cornwall, England for the first face-to-face meeting since the pandemic began.

“Increasingly we are seeing a two track pandemic,” Tedros said, adding that the inequitable distribution of vaccines is “a threat to all nations” because it ‘increases the chances of a variant emerging that renders the vaccine less effective.”

He also called upon vaccine manufacturers to commit 50% of any new volumes of vaccines produced to the WHO co-sponsored global COVAX facility – or at the least give COVAX the first right of refusal to those new vaccine volumes.

The G7 meeting takes place with some good news on the horizon. For the sixth week in a row, the world has witnessed sharp declines in new COVID cases.

However, “a mixed picture” remains with more deaths reported last week than the week previous, in three WHO regions – Latin America, the African region and the Western Pacific, Tedros said.

Latin America, in particular, remained a global hotspot – with yet another wave of rising COVID cases over the past month.  That wave hit a weekend peak of about 300 cases per million people. That is currently more than three times the number of new cases being seen by hard-hit India, five times that of Europe and six times higher than the global average.

“We continue to see encouraging signs in the trajectory of the pandemic,” Tedros said, “However we still see a mixed picture around the world.  Many countries still face an extremely dangerous situation while some of those with the highest vaccination rates are starting to talk about ending restrictions.

“But the frustrating thing about this situation is that it hasn’t changed; and inequitable vaccination is a threat to all nations, not just those with the fewest vaccines.

At the World Health Assembly I call for a massive global effort to vaccinate at least 10% of the population of all countries by September, and at least 30% by the end of the year.  To reach those targets we need an additional 250 million doses by the September.  And we need 100 million doses in June and July.  The G7 nations have the power to meet these targets, and I am calling on the G7 not to just commit to sharing doses, but to commit to sharing them in June and July.

Quest for Origins of SARS-CoV2 Virus

Regarding the ongoing quest to identify the source of the SARS-CoV2 virus, WHO officials said that the Organization lacks any mandate to compel member states such as China to disclose data or information that Beijing may be withholding.

Within the context of the WHO inquiry, the entire investigation must be conducted on a “consensus” basis with member states, stressed Dr Mike Ryan, Executive Director of WHO’s Health Emergencies programme.

“WHO does not have the power to investigate or enter countries without the express permission and cooperation of that country. That is the basis on which the organization is established in its constitution, it’s a member state organization. And that says 194 Member States agree on the rules,” Ryan said, in response to a reporter’s question about whether WHO would follow up on allegations that China has suppressed valuable epidemiological about the early case trial in Wuhan, as well as laboratory data on related horseshoe bat viruses.

“So from that perspective, WHO has no powers to compel.  What we do is we work through cooperation, we work through consensus, and that has worked extremely well for WHO in polio eradication, in smallpox eradication, in dealing with multiple outbreaks and emergencies that occur every year.  We get remarkable cooperation from most of the vast majority of countries in engaging in outbreak investigations and outbreak response in emergency response.”

While acknowledging it is “very, very important that the world understands what the origins of SARS-CoV2 was, ….it’s not always easy to determine that,” Ryan added. “For many other diseases it has taken years of study.”

In that vein, he said that the WHO-convened team of experts that are studying the origins of the virus – and which in March issued their first report of intial findings – would propose the necessary Phase 2 studies “to take our understanding and knowledge to the next level.” The preliminary findings of the first report had stated that the infection of humans was “very likely” due to food-borne exposures to wild or domesticated animals, or animal products, infected with the virus.

The same report concluded that it was “extremely unlikely” that the infection originated in the escape of the virus from a laboratory, such as the Wuhan Institute of Virology, which was studying closely related bat viruses.

That provoked an outcry among scientific critics who said that the Chinese government had suppressed and concealed vital data and databases, and thus the WHO-convened group lacked a real factual basis for ruling out the lab escape possibility.

WHO’s Director General Tedros later acknowledged that the laboratory escape hypothesis had not been adequately explored in the initial investigtion phase.  But WHO so far has not outlined a way forward on the investigation, despite recent diplomatic pressures from the United States and other member states – including a US announcement of its own investigation during the 24 May-June 1 World Health Assembly.