As wealthy countries opt to give third COVID-19 vaccine booster doses to vulnerable citizens, some researchers have called instead for “fractional doses” to stretch the scarce resources.

“If you have two million doses of vaccine, you can give that as two doses to one million people. But what about if you gave fractional doses?” asked Dr Ben Cowling of Hong Kong University’s School of Public Health.

“If you gave half doses, you could spread the same amount of vaccines to two million people, and if half a dose gives you more than half the level of protection compared to a full dose, then you end up with better outcomes at the population level,” Cowling told Friday’s World Health Organization (WHO) meeting on vaccine research.

“Fractionation was used very successfully for the yellow fever vaccine five or six years ago in West Africa when antigens were in short supply,” added Cowling.

His comments came hours after the US Food and Drug Administration (FDA) announced that “immuno-compromised people” should receive third vaccine booster shots, joining the Israel and Germany. 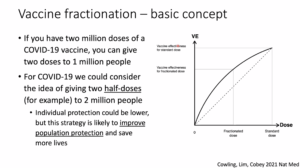 Professor Alejandro Cravioto, chairperson of the WHO Special Advisory Group of Experts (SAGE) on immunisation, said it had advised the global body to seek more evidence from a wider group of experts on the need for boosters.

“While countries have hoarded a huge amount of the available vaccines developed for the control of SARS-Co-V2 virus, other parts of the world are still waiting to receive a small share of these products to protect at least their health force and the most vulnerable groups of their population,” said Cravioto.

“This inequity is what hinders the possibility of a worldwide control of infection… The idea that we’ll achieve a level of herd immunity by immunising a defined percentage of the population seems to be a moving target towards an unachievable goal.”

As a result, said Cravioto, SAGE had advised WHO Director-General Dr Tedros Adhanom Ghebreyusus to “consult a larger group of experts and come up with new science-based actions that can make sure that there are sufficient vaccines available to help defeat the pandemic virus”.

“One of these actions is to determine whether there is a need for booster doses and to assess whether it is more sound to use these products to immunise the same population again, or to use them more reasonably to help protect those that remain to receive their first doses of the available vaccines.”

All but one vaccine manufacturer that addressed the meeting made the case for boosters. Only the Janssen/ Johnson and Johnson representative said the company did not yet have evidence that its vaccine needed a booster.

The manufacturers of Moderna, Pfizer, Sinovax, Novavax, Covaxin (Bharat) all presented studies to show how immunity against COVID-19 waned over time and how a third booster increased immunity.

But Larry Brilliant of Ending Pandemics in the USA called for a move away from “mass vaccinations” to targeted vaccinations based on epidemiological research.

Professor Helen Rees, chairperson of South Africa’s medicines regulatory authority, noted that a “two-tier research agenda” appeared to be developing, one for wealthy countries and another for poorer countries. She also questioned the basis on which countries were opting for boosters, saying the decisions appeared to be based on “immunogenicity data” rather than clinical data.

Meanwhile, Peter Figuero, from the WHO’s Americas office, the Pan American Health Organisation (PAHO) called on governments to share in the profits of pharmaceutical companies.

“Governments should preserve a share in the patents of pharmaceutical companies when their support has made a tangible contribution to the development of the product being patented,” said Figuero.

Moderna had received $957million in public funds and Pfizer had received $445million, and gone on to make billions in profits, said Figuero. If governments that had invested in the R&D of these vaccines also received a share of their profits, this could be re-invested in global vaccine acquisition, he added. 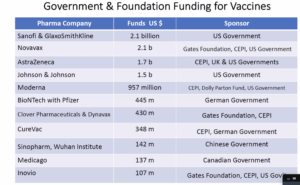