There is insufficient evidence that treating people hospitalized for COVID-19 with blood plasma from recovered patients is safe and effective – and more randomized clinical trials are thus needed, warned the World Health Organization on Monday.

She spoke just a day after the United States Food and Drug Administration (FDA) issued an emergency authorization for use of the antibody-rich cocktail from the plasma of recovered coronavirus patients in people hospitalized with COVID-19.

Swaminathan added that while blood plasma has been used to treat a variety of infectious diseases for over a century, it is still an “an experimental treatment” for SARS-CoV-2, the virus that triggers COVID-19.

In the US, over 71,000 hospitalized COVID-19 patients have already received convalescent plasma as part of the nation’s Expanded Access Program. However, evidence supporting its use is still “inconclusive” and “very low quality”, said the Organization.

“There are a number of clinical trials going on around the world looking at convalescent plasma compared to standard of care, and only a few of them have actually reported results, and the results are not conclusive,” said WHO Chief Scientist Soumya Swaminathan, at a press conference on Monday, in response to a question from Health Policy Watch. “The trials have been fairly small [and while some] trials report some benefit…[the evidence] is still very low quality.”

“The most important question really is about its efficacy and safety being proven and randomised trials, and I hope that we get that evidence in the coming weeks.”

“At the moment, it is still a very low quality of evidence.. So we recommend that convalescent plasma is still an experimental therapy. It should be continued to be evaluated in well-designed randomized trials.

“Of course countries can do emergency use listings, if they feel that the benefits outweigh the risks,” she added, in a nod to the US FDA move. “But that’s usually done while you’re waiting for more definitive evidence.”

US President Trump Calls Plasma “Beautiful Ingredient” – Others Less Sure

Despite the expert reservations, Sunday’s FDA authorization of the treatment was trumpeted at a White House press conference, where US President Donald Trump hailed the plasma as a ‘beautiful ingredient’ that would be a game-changer for COVID patients.

US Health and Human Services Secretary Alex Azar called it a “milestone achievement” while FDA Commissioner Stephen Hahn, FDA Commissioner, said that data from some 70,000 people pointed to as much as a 35% reduction in mortality.

The largest such study of some 35,000 people, undertaken by Minnesota’s Mayo Clinic, suggests that people given plasma treatment within 3 days of being hospitalized had somewhat better survival rates than others, as did people who received plasma with higher levels of SARS-CoV-2 antibodies.  This was according to preliminary data published on medrxiv.org, which has not been peer-reviewed yet.

“We dream in drug development of something like a 35 percent mortality reduction. This is a major advance,” Azar.

"We dream in drug development of something like a 35 percent mortality reduction. This is a major advance."@SecAzar explains the findings from clinical studies on plasma as a treatment for COVID-19: pic.twitter.com/1FS7nh7Ifs

However, a number of leading US health experts, including Dr Antony Fauci, one of Trump’s top COVID advisors, last week had urged the FDA to hold off on its emergency approval of the plasma treatment, saying that existing data was still not strong enough to support wider plasma use.

Notably, the Mayo clinic data was gathered only from “observational” studies and not from randomized controlled studies that are the gold standard for evaluating treatment efficacy.

In a Twitter blast last week, Trump had impatiently blamed the “deep state” for delaying approval of COVID-19 vaccines and therapeutics.  And speaking at Sunday’s press conference, Trump made it clear that he saw the FDA approval as an election issue – suggesting that the authorization might initially have been delayed for political reasons.

The deep state, or whoever, over at the FDA is making it very difficult for drug companies to get people in order to test the vaccines and therapeutics. Obviously, they are hoping to delay the answer until after November 3rd. Must focus on speed, and saving lives! @SteveFDA

After the FDA issued the emergency use authorization anyway on Sunday, some health policy experts blasted it as a move that had been expedited due to politics, not health concerns, in a week where Trump is heading into the Republican National Convention and wants to show fast results in the COVID battlefront.

“Given the explicitly political pressure on the FDA to rush the approval of COVID-19 products, authorizing a new product 1) without publishing the evidence and 2) without a supporting randomized trial risks further damage to public trust in the agency.”

“To be clear, some data from observational studies have been released. But because randomized trials have not yet shown a benefit, it’s not clear than opposing observational data can support an emergency use authorization. It will be critical to see more randomized clinical trials.”

Convalescent plasma isn’t the first product to receive emergency approval despite a shaky evidence base. The antimalarial hydroxychloroquine received emergency approval in late March, after it was widely touted by Trump; its emergency use was later revoked in mid-June after the treatment failed to deliver results in patients.

Given the explicitly political pressure on the FDA to rush the approval of COVID-19 products, authorizing a new product 1) without publishing the evidence and 2) without a supporting randomized trial risks further damage to public trust in the agency. https://t.co/0lKJqyrR5R

Although convalescent plasma has been used against infectious diseases for almost 100 years, it is not risk-free, and may not be suitable in all contexts, added WHO experts at Monday’s press conference.

Most notably, the actual levels of antibodies received cannot be well-controlled since each plasma portion has different antibody titres, said Swaminathan. So even if convalescent plasma proves to be effective and safe, it may be ‘very difficult’ to deliver a standardized therapy to patients. 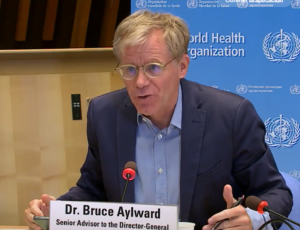 “One of the challenges with convalescent plasma is each individual may have different titles of neutralizing antibodies after recovery, and it’s very difficult to standardize that”, Swaminathan observed.

She also added that scaling-up convalescent plasma therapy may be difficult in countries or hospitals that lack the necessary facilities to screen, extract and store plasma from the blood of recovered patients.

Given that convalescent plasma contains a range of different antibodies – including the highly specific neutralizing antibodies – it may result in side-effects like mild chills and fevers, as well as “more severe” lung-related injuries, or even circulatory overload, noted Bruce Aylward, WHO’s Senior Advisor to the Director-General. According to the FDA, circulatory overload is the second leading cause of death in people that receive transfusions.

“For that reason, clinical trial results [for convalescent plasma therapy] are extremely important to know that we have here demonstrated efficacy” and safety, he added.

Usually, extraction of plasma from the blood requires continuous centrifugation and subsequent freezing within a day of collection. Also, any convalescent plasma sample must be screened for blood-borne infectious diseases – like human immunodeficiency virus (HIV), hepatitis B or C, or even syphilis – and clinicians must match suitable blood types together to prevent adverse immune reactions.

Given the drawbacks of convalescent plasma, some scientists have instead been suggesting that there may be greater potential for developing more specific and standardized monoclonal antibody treatments, as per their use in past outbreaks, such as Ebola.

“There’s a lack of willingness, so there isn’t enough [convalescent plasma] around, but I think the most important question really is about its efficacy and safety being proven and randomised trials, and I hope that we get that evidence in the coming weeks,” said Swaminathan.