Ibadan, Nigeria. Ambrose Dlamini, eSwatini’s Prime Minister, has become the first world leader to die after testing positive for COVID-19. His death sends a clear and chilling message across Africa: the worst days of the pandemic are not behind us.

Dlamini passed away on Sunday 13 December in South Africa, where he was receiving treatment after his condition worsened two weeks ago. This followed a positive test for coronavirus in mid-November. The government’s official statement on its Prime Minister’s death did not state a cause.

The late Prime Minister, who will be buried in a state funeral, had held office since October 2018.

Although many world leaders have tested positive for the virus over the past year, including US President Donald Trump and Brazil’s Jair Bolsonaro, Dlamini’s death – within weeks of a positive test – is a first.

Under his leadership, eSwatini, a small landlocked country adjoining South Africa, became the first on the country to meet UNAIDS’ 95-95-95 targets to end the HIV/AIDS epidemic by 2030.

95% of people living with HIV in eSwatini know their status, 95% of people who know they are HIV-positive have accessed treatment, and 95% of people on treatment have suppressed viral load. eSwatini and Switzerland became the first in the world to meet these targets, back in September.

At the time, he urged the population not to rest on its success, nor to be discouraged by setbacks. “We must ensure that no one is left behind. We must close the gaps,” he added. “We are aiming for 100–100–100.”

In September, Dlamini told Health Policy Watch that, while his country is not fully equipped to deal with pandemics, it had successfully leveraged its HIV/AIDS response to expand capacity to treat members of the population with COVID-19.

“We’ve developed some capacity that we are going to leverage going forward,” he said. “We are going to use the national response framework which has really done well, providing us with capacity over the years. We want to develop it so the country to deal with future pandemics.”

“He was a friend of UNAIDS and helped to steer his country to great successes in the HIV response. We will miss him.”

But despite all of this, eSwatini has struggled to keep COVID cases from rising. The country has the 6th highest infection rates of SARS-CoV-2 on the continent, with 5,855 confirmed cases per million population. The continent’s average is 1,765: three times less.

And although Africa has repeatedly dashed expectations during the pandemic, faring much better than most developed countries, that infection rate in eSwatini is growing aggressively: a trend found in its neighbouring countries.

According to eSwatini’s health ministry, among its population of 1.1 million, the country has recorded 6,768 cases and 127 deaths, leaving a case fatality ratio (CFR) of 1.9%, only slightly lower than the global CFR at 2.2%.

Lizzie Nkosi, the country’s Minister of Health, confirmed reports of recent increases in the number of COVID-linked deaths, flagging that the rise was particularly significant among people with co-existing medical conditions like diabetes, hypertension, cardiac disease and asthma.

“We therefore urge the public to ensure that they do medical check-ups regularly, at least once a year and those diagnosed with a chronic illness should adhere to the treatment as advised by the health workers,” the ministry stated. 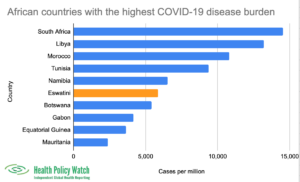 This warning came 11 days before the Nigeria Center for Disease Control (NCDC) announced it had recorded “a sharp increase” in the number of COVID-19 cases across the country between 30 November and 6 December, sparking fears of an imminent second wave.

NCDC added that the proportion of people who were COVID-positive among those tested had increased from under 4% to 6% compared to the previous week – still lower than the continental average of 10.7%.

Despite the Surge, African Health Leaders Fear They May Not Get Vaccines Until Mid-2021

This all comes as the continent watches countries in the Global North begin their COVID-19 vaccination campaigns. Africa is not expected to have access to vaccines until mid-2021. And as the holidays fast approach, Africa’s national and regional health authorities are concerned that citizens also are ignoring recommended guidelines.

Earlier in December, Dr. John Nkengasong, Director of the Africa Centres for Disease Control and Prevention (Africa CDC) told Health Policy Watch that the gains made on the continent regarding the control of the pandemic are being threatened.

To compensate, African leaders need to be more vocal in encouraging citizens to embrace and adhere to guidelines: “My greatest concern and fear is that the gains we’ve worked so hard to achieve may be eroded significantly if we relent [in] our public health and social measures. We need to go back to the basics – washing hands, keeping our distance, and most importantly, wearing masks.”

But the key messages shared by Nkengasong and other public health officials aren’t attracting much attention. Among other political and business leaders and the general public, the widespread feeling is that stricter measures and adherence, as proposed, would extort a significant toll on mental and physical health, and on national economies: as is the case around the world.

In African countries like Nigeria, as well, many people have yet to come to terms with the fact that the pandemic threat is real.  In July, Health Policy Watch reported that the city’s leadership and a significant proportion of the general public do not consider the threat of COVID-19 to be strong enough to halt education or put families out of work.

Despite the surge in cases seen in Nigeria, outdoor events are already returning, with indoor events also potentially on the horizon. On the other side of the continent, elections in Uganda have caused considerable mass gatherings for political rallies, with subsequent infection surges. And this is not deterring Ghanaians, who are now massing for their own election events. Even though regulators are advising against travel, citizens are doing so regardless.

The laissez faire attitude has been attributed by public health experts as a result of the continent’s comparative success in handling the pandemic earlier in the year, as developed countries collapsed under the strain.

Perhaps the news of Dlamini’s death could convince populations across Africa that the sky is yet to fall on the continent. It could be that this visualises the human cost of the pandemic in a way that data can’t. Regardless of the outcome, it is clear that for Africa the worst days are not yet behind it.