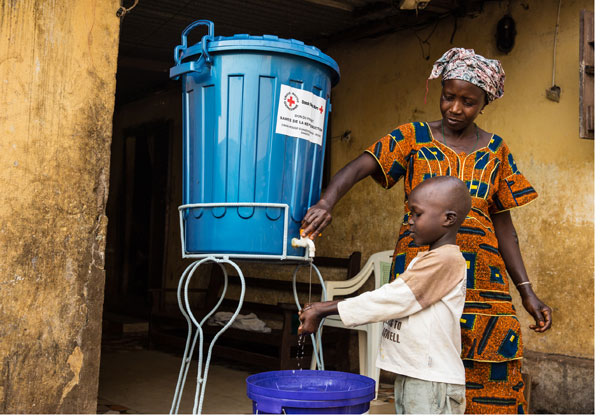 The proportion of the world’s population using safely managed sanitation services increased from 28-45% between 2000 and 2017, according to the latest joint report of the World Health Organization and UNICEF on Progress in Household Drinking Water, Sanitation and Hygiene.

However, huge service gaps still remain, with 4.2 billion people worldwide still lacking access to what WHO defines as hygienic toilets or latrines — where wastes are treated and disposed of safely. And while numbers have declined by one-half since the year 2000, some 673 million people still practiced open defecation in 2017.

In terms of drinking-water, the proportion of people with a “safe” drinking water sources, increased from 61% to 71% between 2000-2017, notes the WHO report, released Tuesday. However, some 2.2 billion people  still lack access to a safe drinking-water source, which WHO defines as water located on the household premises, free from contamination and available when needed. Finally, some 3 billion people also lack  basic-hand washing facilities of soap and water at home; these are critical in preventing transmission of many bacterial and parasitic diseases.

The report, Progress on drinking water, sanitation and hygiene: 2000-2017: Special focus on inequalities finds that large gaps also remain in the quality of services that can be accessed by rich and poor, as well as by urban and rural populations. 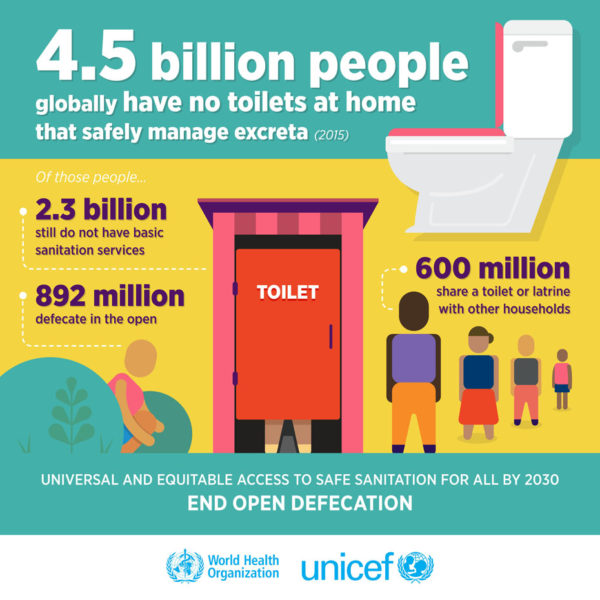 Of the 2 billion people that still lack access to even the most basic toilet or latrine, 7 out of 10 live in rural areas and one third live in least  developed countries, the report notes.  Nearly three quarters of people in least developed countries still do not have basic hand washing facilities  at home.

And in countries where service levels were assessed by socio-economic group, coverage of basic services among the richest sectors of the population was far higher than among the poor.

“Mere access is not enough. If the water isn’t clean, isn’t safe to drink or is far away, and if toilet access is unsafe or limited, then we’re not delivering for the world’s children,” said Kelly Ann Naylor, Associate Director of Water, Sanitation and Hygiene, UNICEF, in a WHO press release. “Children and their families in poor and rural communities are most at risk of being left behind. Governments must invest in their communities if we are going to bridge these economic and geographic divides and deliver this essential human right.”

Without stepped-up action, the world will fail to meet the 2030 Sustainable Development Goal 6 for universal access to safe water and sanitation services, WHO officials warned.  That translates into higher rates of transmissible diseases, which are both deadly as well as costly to treat for budget-strapped health systems.

“If countries fail to step up efforts on sanitation, safe water and hygiene, we will continue to live with diseases that should have been long ago consigned to the history books: diseases like diarrhoea, cholera, typhoid, hepatitis A and neglected tropical diseases including trachoma, intestinal worms and schistosomiasis,” said Maria Neira, Director of WHO’s Department of Public Health, Environmental and Social Determinants of Health in the WHO press release.

WHO estimates that some 297 000 children under the age of 5 die every year as a result of diarrhoeal diseases linked to unsafe drinking water, inadequate sanitation or hygiene. Poor sanitation and contaminated water are also linked to transmission of deadly water-borne diseases such as cholera, dysentery, hepatitis A, and typhoid.

Although some 2.1 billion people have gained access to basic sanitation services since 2000, in many parts of the world the wastes produced by toilets and latrines leach untreated into ground and water sources – meaning that they are not really adequate sanitation solutions.

And despite the global decline in open defecation, in 39 countries the practice has actually increased over the past 17 years, the report notes. The majority of these countries are in sub-Saharan Africa, which has experienced strong population growth over the same period.

“Closing inequality gaps in the accessibility, quality and availability of water, sanitation and hygiene should be at the heart of government funding and planning strategies. To relent on investment plans for universal coverage is to undermine decades worth of progress at the expense of coming generations,” said Naylor.

The report is the latest in the series of reports that are issued by the WHO/UNICEF Joint Monitoring Programme (JMP) for Water Supply, Sanitation and Hygiene, which is the official United Nations mechanism for tracking global progress on safe drinking water, sanitation and hygiene, in relation to the Sustainable Development Goals (SDG).