Delegates from most of the world’s nations met in Bali this week to review progress in tackling the worldwide problem of mercury poisoning from artisinal gold mining and other environmental sources as well as in the health care industry, in line with the 2013 Minamata Convention.  The parties were meeting for the fourth time since the Convention entered into force in 2017.

Expanding the list of mercury-containing products for phase-out and discussing thresholds for mercury waste emissions in air and water, were among topics being discusssed. In addition, convention parties were reviewing national plans for the reduction  and eventual elimination – of mercury in artisanal and small-scale gold mining (ASGM), which poses particularly grave health hazards for women and children working in the sector.

In January 2022, WHO published a review of some 60 countries’ implementation strategies for tackling mercury’s environemental health risks. So far some 129 WHO member states have become parties to the Convention.  However, there was no evidence of health ministry participation in about half of the national reports – reflecting the lack of public health sector involvement in promoting awareness about the huge health risks of mercury poisoning.

Artisanal gold mining is one such major source of exposure. An estimated 4-5 million women and children are employed in ASGM, where mercury is still widely used to extract gold from ore – even though cleaner and safer alternatives exist. Metals production, waste incineration, including products like batteries, and the burning of coal, which leads to farflung environmental mercury contamination of water sources and ultimately aquatic life, are other key sources of mercury exposures to humans as well as wildlife. 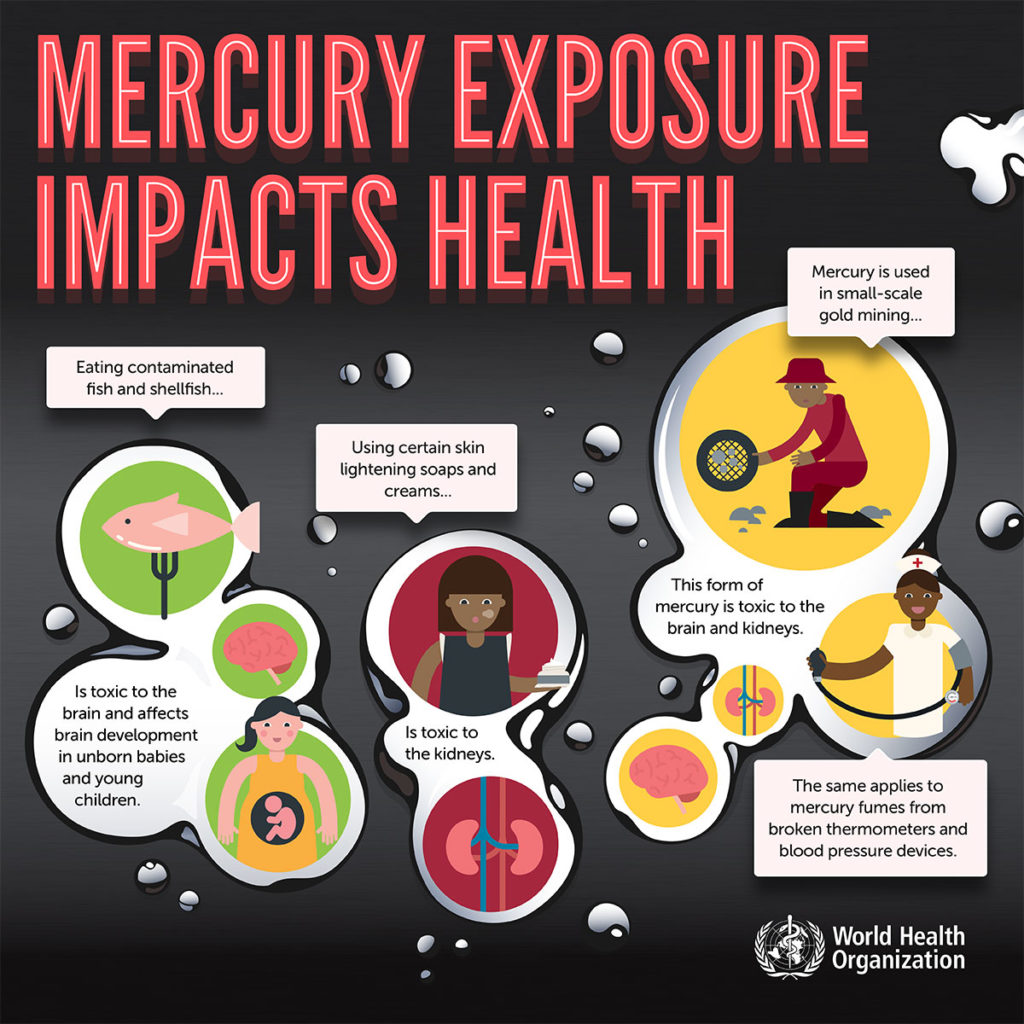 Updated guidelines on the use of mercury in artisinal mining were expected to emerge from the meeting, along with an agreement on a timeline for eliminating mercury from dental products.

The health sector is traditionally a major consumer of mercury products, including devices such as thermometers as well as for dental fillings.  However, there has been a push to replace them with safer alternatives, under the guidance of the World Health Organization, which has supported implementation of the Minamata Convention since its adoption.

Among the 60 national reports reviewed, 11 countries did not even indicate a role for health authorities in implementing the Convention, the WHO report found.

Also, the health sector role, when acknowledged, was limited largely to phase out of mercury devices in healthcare settings without much attention to the need to raise awareness of mercury’s health impacts in the broader enviornment. That is despite the toxic human health impacts of environmental mercury exposures  from occupational and wildlife food sources, largely fish and shellfish.  These include serious, permanent neurological and developmental damage, as well as toixic effects on digestive and immune systems, as well as lungs, kidneys, skin and eyes, according to WHO.  See Geneva Solutions review of the challenges in phasing out the use of mercury from artisanal mining.