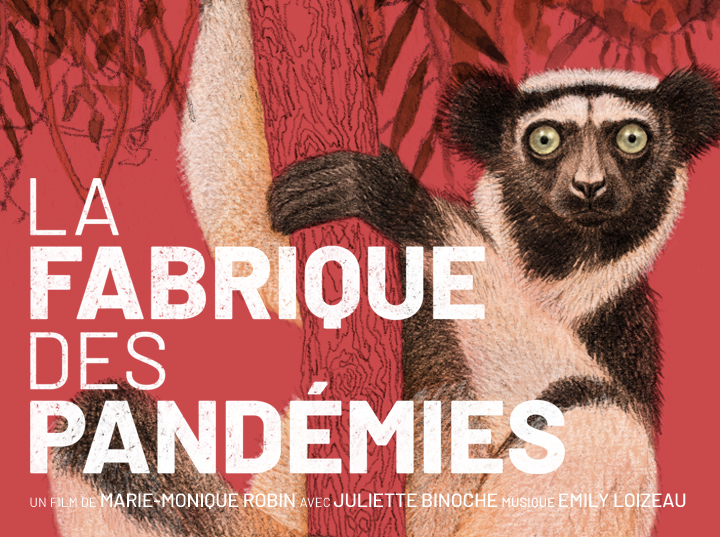 When we think about the critical drivers of disease prevention and control – we need to stop thinking only about medicines, vaccines and diagnostics.

In fact some of the most important forms of disease control can be found in forests – which harbor thousands of pathogens, known and unknown in relative isolation from humans and the damage that they could otherwise cause.

But humankind is felling forests and wreaking other kinds of damage on ecosystems at an unprecedented rate – laying the groundwork for the next pandemic as we speak endlessly about how to get the world out of the present one.

That is the key message of the new film “La Fabrique des pandémies” (Making Pandemics) by the French journalist and documentary filmmaker, Marie Monique Robin.

The film will be aired at a public avant-premiere on Wednesday 4 May at 6 p.m – as part of the Geneva Health Forum. The Forum, which begins on Tuesday, has a climate and environmental health focus this year.

The film, born out of reflections during the COVID lockdown, took Robin to eight countries across Africa, Asia and the Americas  – from French Guinea to DR Congo, Malaysia and Mexico, as well  as upstate New York.

The result is the product of the relentless detective work of Robin, a seasoned journalist who also directed “The World According to Monsanto”, a critical look at the pesticide industry.

Narrated by the French film star, Juliette Bionoche, the film aims to make the issue more accessible to the general public – despite its highly technical material.

So it is Binoche that relates the stories of the deadly viruses, bacteria and parasites that have “escaped” from the wild to become major plagues to human health – as seen through the eyes of the scientists who have documented their destructive pathway.

The examples include the story of Malaysia’s deadly, bat-borne Nipah virus which became a threat to humans as bats driven from rainforests destroyed to create palm oil plantations found new homes in agricultural areas, and particularly around pig farms. Infected pigs, close to people both genetically and proximally, then began transmitting the virus to humans.

While most of the stories relate to developing countries, developed regions are not immune. Lyme disease, transmitted by ticks in North America, has posed an increasing threat to human health as forests there become fragmented, biodiversity is reduced, and species such as the white-footed mouse proliferate, which are a reservoir for the deadly Borrelia bacterium that causes Lyme disease.

The film began with Robin’s own reading and reflections during the COVID lockdown – including an article that she read in the New York Times, which struck a special chord entitled “We made a pandemic.”

“I began searching and contacting scientists with whom I have been working for more than 30 years,” she relates. Among them was Serge Morand, a parasitologist living in Thailand – who will also be appearing himself at the Geneva Health Forum, running from 3-5 May.

“And he said, oh it would be great if you could put all of us together in a book or a film.

“The thing is,” Robin adds, “is that there have been many, many dozens of studies published, showing the link between the destruction of biodiversity, on the one hand, and on the other, the emergence of infectious diseases.

“And so Morand told me, ‘if you could put all of us together, it would be very powerful. Because we have been sounding the alarm for so many years, and just nobody is paying attention.”

Robin went on to interview some 62 scientists working in various parts of the world – with the stories of 14 condensed into the book, Making Pandemics, published last year, which has now been made into a film.

The interviews all weave together to underline a single message about the ecological factors driving the emergence of new infectious diseases – and the expansion of already well-known diseases.

“The first factor is, of course, deforestation in tropical areas,” Robin says of the key drivers.  “And then intensive breeding [of animals], and then globalization.

“It means growing soybeans in Argentina or Brazil, to feed European cattle. It means cultivating palm trees.  It means mining, gold, copper, etc.  And also urbanization.  All of these factors which contribute to deforestation in tropical areas.”

While there is some growing awareness about how climate change and biodiversity loss is increasing the frequency at which diseases like Ebola, Nipah and others are emerging or expanding, Robin offers fresh insights into why this is the case.

Just imagine the forest as a massive universe of bacteria, parasites and viruses, both known and unknown, circulating among the animal species that live there.  When forests are deep and expansive, pathogens are more likely to stay within their natural geographic boundaries, Robin explains.

And when animal species are diverse and plentiful, then dangerous viruses are largely contained by a set of natural biological checks and balances that keep other species in check too.

In a well-balanced ecosystem, when pathogens have lots of different animals to infect – they won’t infect species that can transmit the disease to humans as frequently or as intensively – something that she describes as the “dilution effect”.

Animals that are more prone to dangerous infections also cannot become too dominant as a species, and thus pose an even greater risk to humans – because they also are the prey of other animals that keep them in check.

But when the forest is cut away or fragmented – and its animals hunted down or otherwise destroyed by humans – then the chances of a pathogen infecting an animal species with a dangerous pathogen that may then carry the same disease to humans increase.

Lyme disease is a good example of that principle, she explains.

“The dilution effect means that when you have a big community of mammals floating around in the forest, then the probability that a tick will feed on a white-footed mouse, which is a reservoir of the Borrelia bacterium, is diluted.

“A tick, which needs a blood meal, may land on an opossum instead of a mouse – and the opossum won’t get infected because he cannot be a host for the bacteria,” says Robin.

The ticks left with fewer animal choices, feed more on mice – in a vicious cycle.

“So the white-footed mouse is proliferating, and becoming more infected by ticks,” says Robin. More infected ticks also land on deer, who are hunted by humans.

“And scientists have shown that the probability of [humans] also getting infected in a fragmented forest is five times higher; this is the dilution effect,” she says.

“The dilution effect shows that biodiversity protects your health because when you have a lot of biodiversity, the chances of anyone [human] getting infected are reduced.”

Click here to reserve a free ticket to the film., See the complete programme for  GHF 2022 here – and register for the full event Tuesday-Thursday or daily, in person or remotely.

This is part of a Health Policy Watch series of stories on feature themes at the 2022 Geneva Health Forum. Supported by a grant from the Canton of Geneva.