A handful of powerful countries, including but not limited to the United States, remain hesitant over a plan to bolster the World Health Organization’s (WHO) finances by increasing member states’ fixed annual contributions – thus reducing is reliance on the whims of voluntary donations.

But US domestic politics, more than geopolitics, may be the bigger hitch for Washington in the negotiations, diplomatic sources in Geneva told Health Policy Watch, rebutting media reports that US hesitancy centres around fears that finance reform could somehow increase China’s influence in the organisation.

On the eve of a critical WHO governing board meeting in Geneva that begins Monday, the US is engaging “constructively” over the proposed move to scale up fixed annual contributions by member states so that they eventually account for half of the organisation’s funding needs, the sources said.

But any US agreement to raise the WHO’s fixed contributions, however modest, would have to win Congressional approval at a precarious time when President Joe Biden’s Democratic majority is razor thin.

“And it’s not just the United States; I wouldn’t flash out only the US,” that remains opposed to the funding reforms, one source, speaking on condition of anonymity, said.

“The US is constructively engaging,” the source added, “But I think it’s mostly tricky for the US because they have a strict policy on assessed contributions, Congress, I think needs to provide the green light – and WHO does not have a great standing in the US general public opinion.

The WHO’s 34-member Executive Board, which meets twice a year, firstly to set the agenda for the World Health Assembly in May, and again after the WHA, appears likely to delay making a decision on two critical issues: the first on sustainable WHO finance and a second move to toughen the pandemic response.

In light of the lack of consensus, typically required for member state decisions, the board will likely defer making any clear recommendations, leaving hard choices to be hashed out before the WHA, which brings together all 194 member states.

Efforts to strengthen the WHO’s response to future pandemics also face an uphill battle.  Last week, China demanded the deletion of critical language that would support giving the WHO faster access to outbreak sites from a document that etches a way forward for negotiations over a new international pandemic accord. 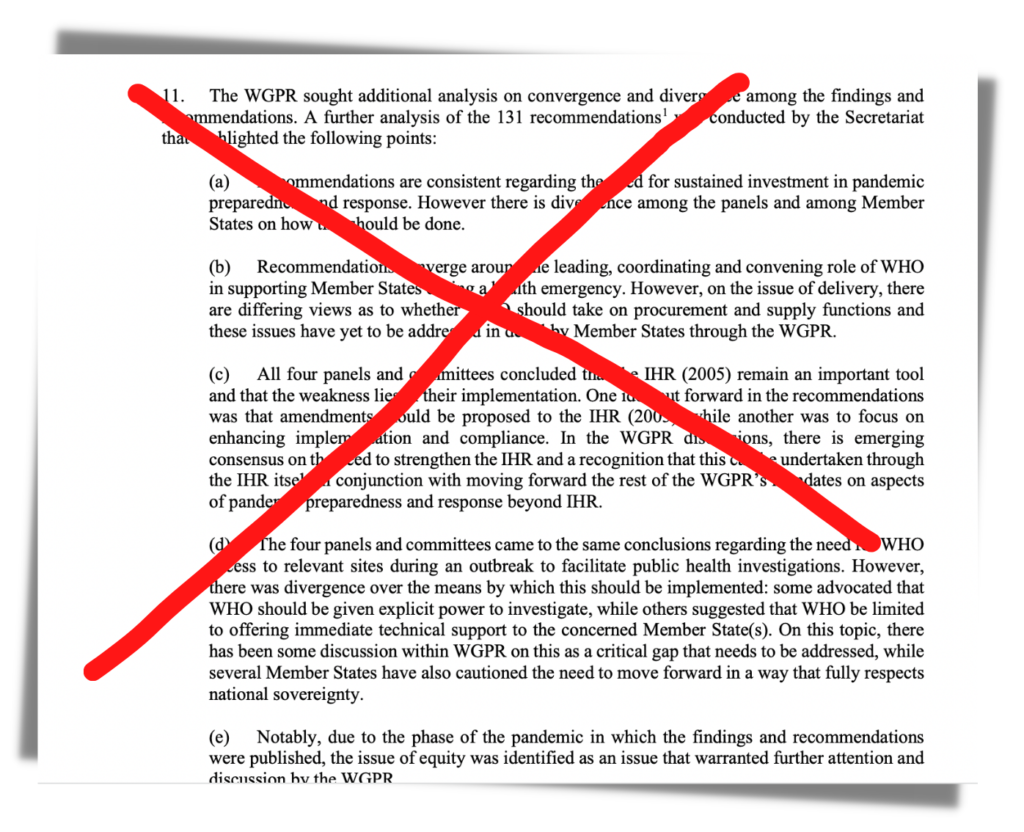 At a special World Health Assembly session in November, WHO member states agreed to start negotiations on the new pandemic accord, which could take the shape of a convention or other multilateral legal instrument.

But if key clauses about access to outbreak sites, pathogen sharing, and other aspects of pandemic preparedness and response, are watered down or deleted, the resulting international agreement, that will take several years to negotiate, could wind up diluted of real clout or meaning.

Pandemic accord and finance scale-up: linchpins in bigger reform package

The new pandemic accord, as well as a scale-up in assessed contributions are viewed as the lynchpins in a series of broader reforms to the WHO proposed by a number of recent external reviews of global pandemic response  – including an Independent Panel co-chaired by Helen Clark and Ellen Johnson-Sirleaf, former heads of New Zealand and Liberia respectively.

In the wake of those scathing reviews, initiating negotiations on a pandemic accord and reforming WHO’s finance, became flagship causes for a large bloc of European and African member states, with the support of like-minded countries in Latin America and Asia. The reforms are seen by supporters as critical to maintaining WHO’s central role in global health guidance and decision-making, post pandemic.

The US served as the co-chair of the Working Group on Pandemic Preparedness and Reform – with career health and human services diplomat Colin McIff reportedly playing a key role in swinging US administration support behind a proposal to negotiate a pandemic accord.

But that left countries such as China in stark opposition to some key provisions of the draft framework that would strengthen multilateral responses and most specifically the rapid outbreak access clause.

On finance, in contrast, proposed reforms that have received support, officially, from over 90 countries, led by Germany. German diplomat Björn Kümmel, head of the Sustainable Finance Working Group, described WHO’s current structure as “fundamentally rotten” at a public meeting in December, due to its excessive dependence on just a handful of rich countries and a few private donors.

Although opposition to the finance plan may be narrowing, a handful of influential nations, including the United States, Japan, Brazil and Argentina continue to resist.

“Russia apparently is now in favour of an AC (assessed contributions) increase, and India apparently,” one source said on the eve of the EB meeting.

“But on the others, I think that hasn’t changed much. So, I just think there needs to be a further discussion, and we will have to see where there can be consensus or a middle ground.”

Sources, however, downplayed recent reports that Chinese-US tensions may be guiding Washington’s considerations: “The influence of China or others, economically and politically, will not be decided in the WHO.

“And rather, if we are not putting UN agencies on a stable footing, with regards to independence and integrity, then we get a problem, I think, in the future.”

Assessed contributions paid by all 194 member states currently amount to only about 16-17 per cent of WHO’s annual budget – with the rest of the funding coming from so-called “voluntary contributions” by member states, with the United States the WHO’s leading donor followed by the Bill and Melinda Gates Foundation.

Finance assessments would only increase gradually

According to the draft proposal that emerged from a WHO member state Working Group on Sustainable Finance, but failed to gain full consensus, the move to boost regular contributions to a 50% level would be made gradually  beginning in 2023-24 and scaling up to the full 50 per cent by the 2028-2029 fiscal year.

For the US, in fact, the absolute amount of the assessed contribution would rise from about $115 million  in 2022-2023 to about $240 million by 2028-29.   That, however, is relatively negligible in light of the US voluntary contributions which were more than $300 million in 2019, according to the WHO finance dashboard – also suggesting that the obstacles are more political than financial.

WHO’s budget is about US$ 3 billion a year, although the WHO has not updated its budget dashboard to display member state contributions for the 2021-2022 budget year.

Some mid-size and middle-income countries like Argentina and Brazil, are also reportedly concerned over absorbing new assessments in light of the economic toll of the pandemic.

At the same time, the investments required are small in comparison to the trillions of dollars lost to the pandemic. The increased allocations would amount to only about $600,000 a year for all 194 member states by 2028-29, observers say.

“If you look at the actual proposal, many of the bigger jumps come at a later stage, I really hope there is not a crunch in 2028,” said one source. “It’s not about funding, it’s about the question of control…I guess the issue is a matter of principle… How much do you trust the WHO that they will do something sensible with the money?”

While European decision-makers also say they have, at times, shared US fears over expanding Chinese influence on the WHO “the greater fear is that of the WHO being incapable of doing its job in the next pandemic,” as one observer put it.

Conversely, the Organization could likely function more independently and “do their job better – if they get more assessed funding and don’t have to run around to beg and shop around and hire temporary experts all of the time.”

From wild animal markets to DRC sexual abuse scandal: other topics on the agenda

This week’s EB meeting, which lasts through Saturday, will also consider over two dozen other issues in the WHO’s three strategic priority areas. Those are: health emergencies, universal health coverage, and “healthier populations”, which includes preventive health and climate and environment measures.

With respect to preventing future pandemics, the EB will also review new recommendations by the WHO, UN Environment Programme and the World Organization For Animal Health (OIE) – aimed at “ reducing public health risks associated with the sale of live wild animals of mammalian species in traditional food markets”.

Despite the unresolved debate over whether the SARS-CoV2 virus originated from a lab biosafety incident or in the food chain, there is widespread expert agreement about the huge  risks that wild animal breeding, slaughter, trafficking and sale in traditional markets pose generally in triggering future pathogen escapes from the wild, and pandemics.

The executive board will also review a report on WHO’s implementation of recommendations by an independent commission that examined allegations of sexual exploitation and abuse during WHO’s deployment to the Democratic Republic of Congo between 2018 – 2020, along with broader recommendations on strengthening WHO’s policies with regards to the prevention of sexual abuse.

The recommendations propose engaging an independent audit of WHO’s management of the issue, among other steps. News of the sex abuse scandal first came to light in 2020 as a result of a joint investigative report by the New Humanitarian and Thompson Reuters Foundation.

Other issues on the agenda

The EB also will consider the possibility of extending the lifespan of a Global Strategy and Plan of Action on Public Health, Innovation and Intellectual Property, due to expire this year, as well as proposals for reform in the way civil society and other “non-state actors” engage with WHO, including at the EB and WHA debates.

Finally, the governing body will review the terms of a revised contract fixing the WHO Director General’s salary at US$ 259,553 gross, plus a US$21,000 discretionary allowance for the period 2022-2027 – with an option to join the United Nations pension fund – or make his own pension arrangements. Director General Dr Tedros Adhanom Ghebreyesus is the sole candidate standing for the DG position, and thus is expected to be re-elected to another five-year term at the May 2022 WHA.