The high rate of smokeless tobacco consumption especially in low-and middle income countries is a looming global public health challenge. The unregulated sale of these products especially in South and South-East Asia has underscored the need to revamp the national regulations, according to the Seventh Edition of the Tobacco Atlas published Wednesday.

The report  by Vital Strategies and the Tobacconomics team at the University of Illinois at Chicago, U.S, noted that tobacco usage of smokeless and smoked products together led to 8.67 million deaths worldwide in 2019, with economic damages worth approximately US $2 trillion. That’s over 500,000 deaths more annually, than WHO’s most recent estimate of 8.1 million deaths a year from smoking.  In addition to the world’s roughly 1 billion active smokers, there are also some 360 million are smokeless tobacco users, the report notes.

While globally, smoking rates declined from 22.6% in 2007 to 19.6% in 2019, recent increases in tobacco consumption rate among young people, and particularly of smokeless tobacco products, also is raising the alarm. The most popular ways of consuming tobacco continue to be through cigarettes, e-cigarettes or vaping.  In addition, however, traditional smokeless products, such as chewing tobacco and snuff continue to have a deeply-rooted customer base. The industry’s hold over its consumers becomes all the more apparent evident when you consider that that only five firms control over 80% of the world’s cigarette market.

“Uneven and anaemic implementation of tobacco control measures means that richer countries are unlocking the economic and health benefits of strong tobacco control, while the industry is still preying on emerging economies in ways that will lock in harms for a generation or more,” one of the lead authors of the report Jeffrey Drope, of the School of Public Health at the University of Illinois at Chicago, told Health Policy Watch.

Traditional markets, especially in LMICs,  account for over 90% of the sale and consumption of smokeless tobacco products like khaini, gutka, pan masala, and snuff. The high level of nicotine those products include causes chronic dependency, howeveer, and thus addiction chains. With the unregulated sale and use of these products, rural consumers in LMICs are the ones who are affected the most, the report said.

One of the most disturbing findings of the report is the fact that young women are now increasingly picking up tobacco products. Youth tobacco use has increased in 63 of 135 countries surveyed. According to the survey, over 50 million individuals in the 13-15-years age bracket consume tobacco products.

The report also highlights that the countries with the highest prevalence of tobacco use among youth, as well as high consumption of smokeless tobacco products generally, have a lower human development index scores. The growing use of tobacco among young girls and women in many countries is also set to reverse historically low tobacco usage among females. 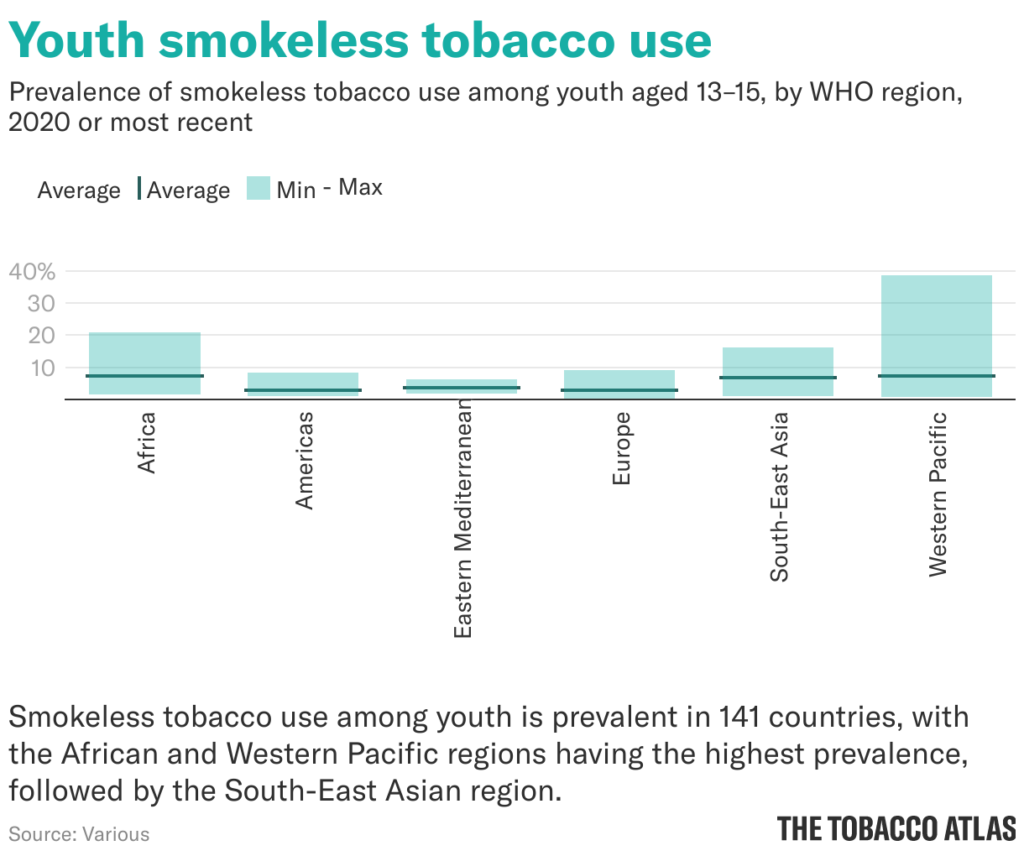 E-cigarettes also a growing risk for the young

In addition to traditional smokeless products, e-cigarettes are increasingly popular among youth, and are often perceived to be ‘better than smoking.’ The use of flavours in these products make them more appealing and seem ‘less dangerous than cigarettes’. And while some reports suggest that damage from e-cigarettes may be somewhat less than conventional cigarettes, e-cigarette use also causes negative pulmonary and cardiovascular effects, and the exposure to high levels of nicotine is particularly worrisome for brain development. However, the lack of data about e-cigarette use along with the mostly-unregulated nature of this market poses a major challenge in combatting e-cigarettes, the report warns. 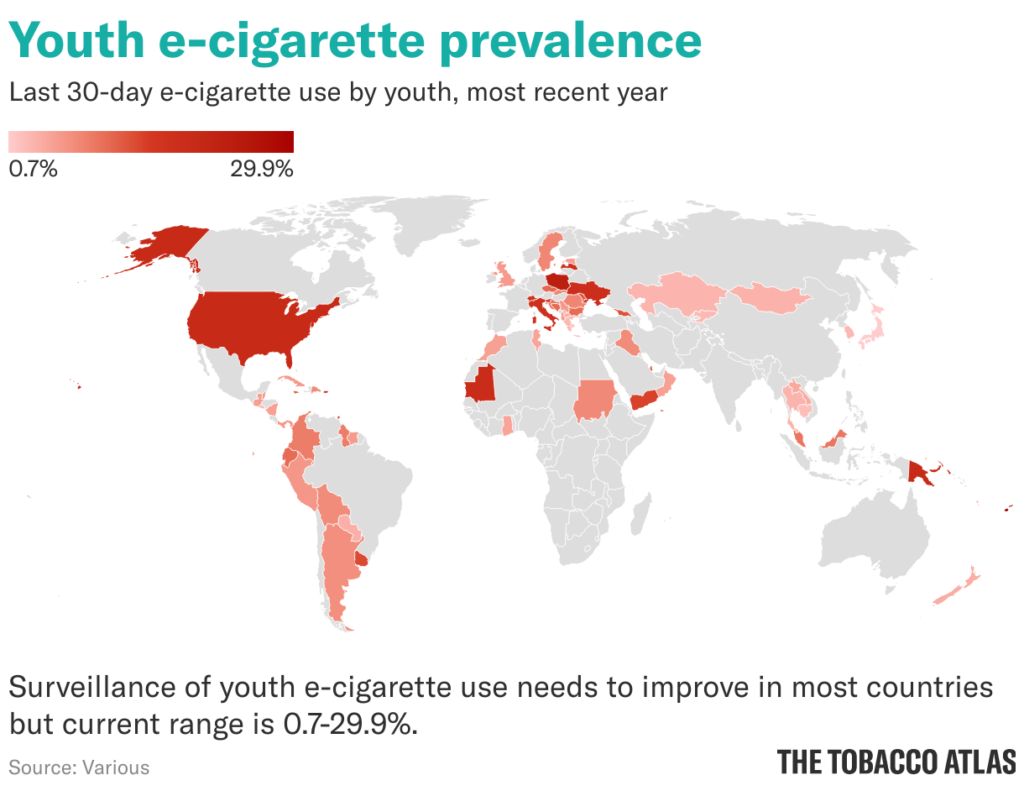 Many countries don’t have the capacity to deal with strict controls of smokeless or e-cigarette products, Drope told Health Policy Watch, saying. “We were so geared towards regulating cigarettes, that it [regulating e-cigarettes] has been difficult, because there are different supply chains,” he said. “There are different ways of marketing and governments really need to take this seriously and make sure that we’re not creating a whole new generation of nicotine users.”

According to the report, the tobacco industry spent $8.2 billion on advertising and promoting cigarettes and smokeless tobacco in 2019 in the United States alone. The groups targeted the most are young adolescents.

The unregulated world of digital social media platforms like Facebook, Instagram, and TikTok represent a critical marketing outlet for tobacco companies that are eager to skirt the restrictions that have gradually been imposed on more conventional forms of advertising, such as plain packaging or front of package labels warning of tobacco’s harms.

“The advertising is now indirect,” said Dr. Nandita Murukutla, Ph.D., Vice President, Global Policy and Research, Vital Strategies. She said that Instead of brands competing with each other, tobacco producers target audiences through product placements in films, or using non-tobacco product identities. “It has migrated from traditional media to social media, which is amorphous, hard to regulate, especially across international jurisdictions.”

The report also highlighted how the United States tobacco industry has been deliberately targeting the black community , particularly through marketing of items like menthol cigarettes. Menthol cigarettes are easier to start, harder to quit and deadlier than conventional cigarettes, said Phillip S. Gardiner, DrPH, Co-Chair of the African American Tobacco Control Leadership Council.

Currently, over 85% of Black smokers aged 12 or above use menthol cigarettes compared to 29% of White smokers in the U.S. Although Black people smoke at similar rates to White people, they have higher associated death rates, including from cancer.

“The tobacco companies unashamedly have appropriated #BlackLivesMatter to sell their products, while simultaneously opposing policies that would actually protect Black health and lives,” Gardiner added.

So, What Could Help? 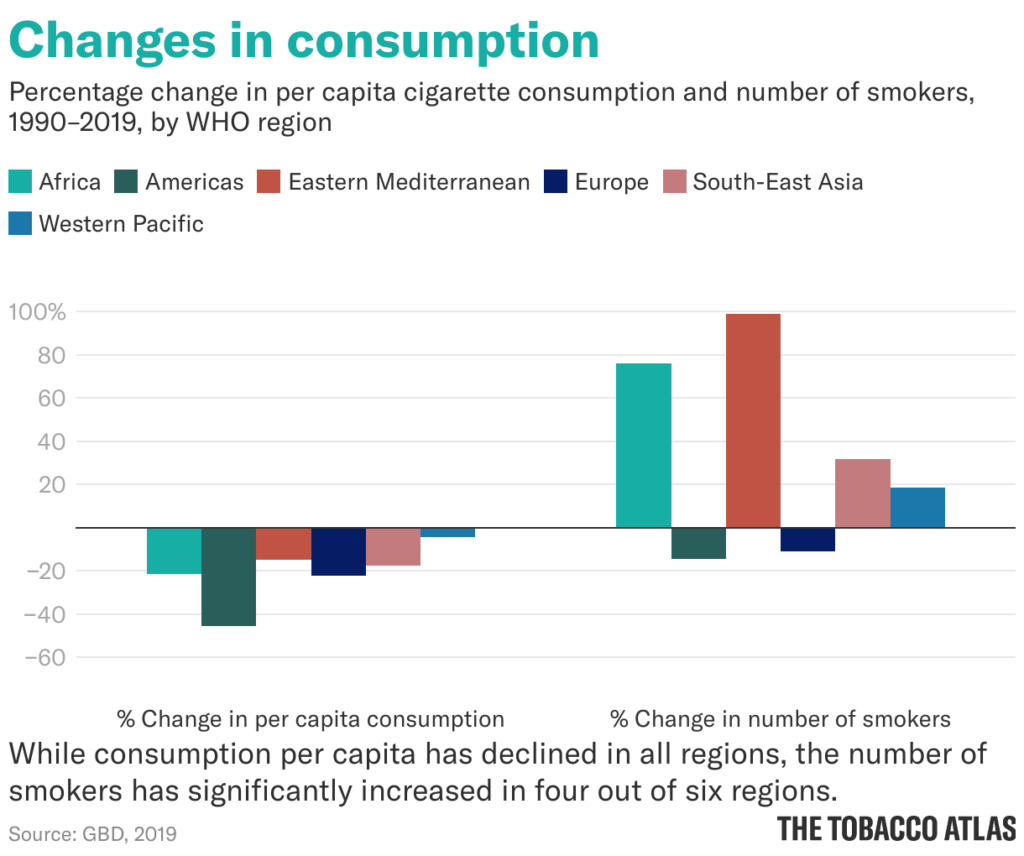 According to Murukutla, the best way to combat the rampant promotion of tobacco by the industry in the rural and urban markets can be solved by counter marketing. Such a marketing “that describes the harms of this habit, whether it’s through graphic health warnings or other means, is a highly effective way of reaching and shifting that narrative from traditional to help,” she told Health Policy Watch.

Further, increasing the price of tobacco by 50% worldwide through higher taxes would save more than 27 million lives and generate US$ 3 trillion in extra tax revenue over the next 50 years, the report suggests.

Media campaigns are cost-effective and play a major role in making users kick the habit. The report showed that a smokeless tobacco control mass media campaign in India yielded more than 17 million additional quit attempts at a cost of just US$ 0.06 per attempt.

When it comes to cross-border marketing of tobacco products, she said that the ratification of international treaties like the Framework Convention and International Cooperation Mechanisms are ultimately the best way of addressing such issues since “it really does require countries to coordinate to stop it at source.”