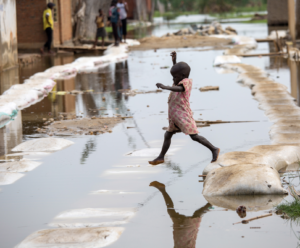 One billion children – almost half the world’s children – live in 33 countries that are at an “extremely high-risk” from the impacts of climate change including heatwaves, cyclones, air pollution, flooding and water scarcity.

This is according to UNICEF’s Children’s Climate Risk Index (CCRI) which provides the first global comprehensive view of children’s exposure and vulnerability to the impacts of climate change.

“This report examines for the first time exactly how many children live in areas that experience multiple, overlapping climate and environmental risks that trigger, reinforce and magnify each other combined with data on the availability and quality of essential services such as healthcare, education and water and sanitation to give a true insight into the impact of the climate crisis on children,” according to UNICEF executive director Henrietta Fore.

Fore added that “almost every child on earth” was exposed to at least one climate shock, but that the survival of the one billion children in high-risk countries “is at imminent threat from the impacts of climate change”.

Twelve of the 15 worst affected countries are in Africa, with the Central African Republic, Chad and Nigeria ranked the three worst-affected countries. Pakistan, Afghanistan and Bangladesh are the only non-African countries in this group.

Meanwhile, the safest three countries for children are Iceland, Luxembourg and New Zealand.

“Addressing the climate crisis requires every part of society to act,” said Fore,  appealing for greenhouse gas emissions and environmental pollutants to be reduced dramatically.

“We are crossing key boundaries in the Earth’s natural system, including climate change, biodiversity loss, and increasing levels of pollution in the air, soil, water and oceans,” according to the report.

“As these boundaries are breached, so too is the delicate natural balance that human civilization has depended upon to grow and thrive. The world’s children can no longer count on these conditions, and must make their way in a world that will become far more dangerous and uncertain in the years to come.”

According to the report, the climate crisis is creating multiple crises that threaten children’s very survival. They are more vulnerable physically to floods, droughts, severe weather and heatwaves and physiologically to pollution and climate-related diseases such as malaria and dengue.

According to the recent IPCC report, global greenhouse gas emissions need to be halved by 2030 and cut to zero by 2050 to avoid the worse impacts, but most countries are not on track to meet these targets.

“Only with such truly transformative action will we bequeath children a liveable planet,” according to the report.

According to Nkosi Nyathi, a young climate change activist from Zimbabwe: “What keeps me on the frontline for climate justice is the notion that I don’t only represent my nation but my entire generation because climate justice concerns our future.

“I have dedicated my voice as a voice of the voiceless, to call for immediate action and there is no better time for acting than now. Take a closer look at the unpredictability and uncertainty of weather patterns, the rise in sea levels, frequent cyclones, hot temperatures and heatwaves – honestly, how am I expected to attend school under a scorching sun?”