Outside the posh Hotel Berlin venue,  activists plastered the doors with scientific papers on climate change’s health and environment impacts while a handful staged a sit-in, as police cordoned off the area. 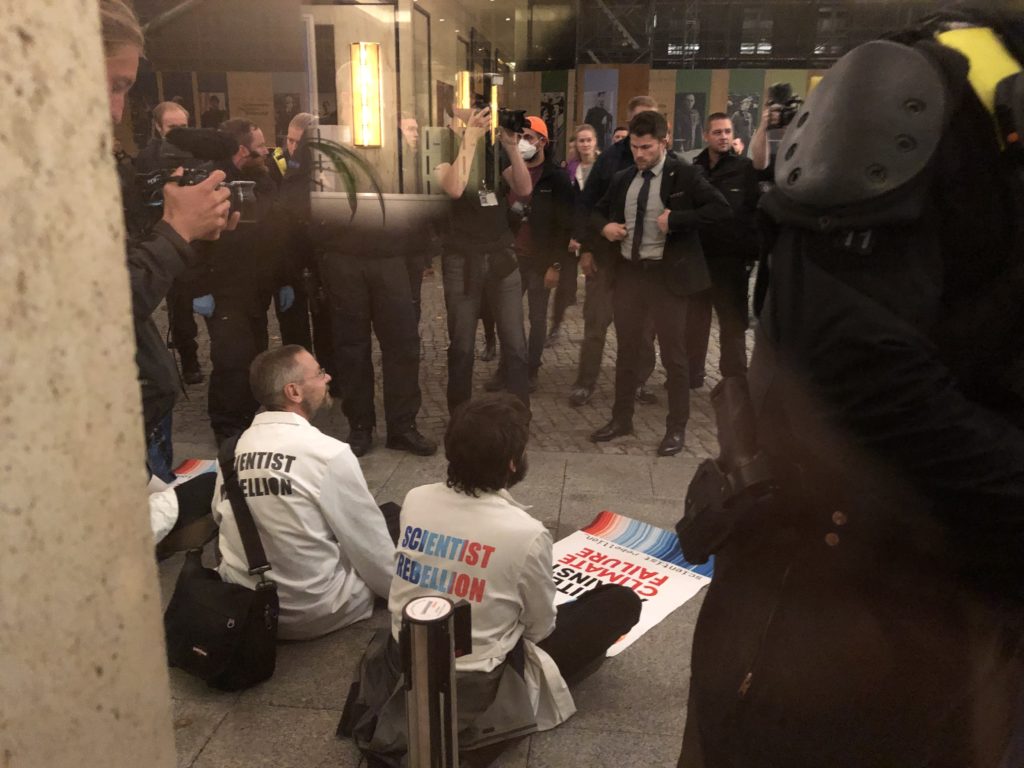 “How many scientific papers are pasted on this building where Olaf Scholz is speaking, telling about the climate crisis and the health crisis?” said one protestor in a post on the demonstration.  “How many things did we do before coming here?”

Added another protester: “Governments, including the German one, have not defended the climate safe zone. Now there is no plausible way to limit global heating to below 1.5°C.”

Earlier, Africa Centre for Disease Control Acting Director, Dr Ahmed Ogwell, protested at being delayed by German border guards at Frankfurt airport. In a series of tweets, Ogwell said that he had been “mistreated” at Frankfurt Airport by immigration guards who “imagine I want to stay back illegally. My attendance of the @WorldHealthSmt is now in doubt. I’m happier & safer back home in Africa.”

I’ve been mistreated at @Airport_FRA by immigration personnel who imagine I want to stay back illegally. My attendance of the @WorldHealthSmt is now in doubt. I’m happier & safer back home in Africa. They invite you then mistreat you.

The incident provoked a small storm on social media, including  US Assistant Secretary for Global Affairs, in the Department of Health and Human Services, Loyce Pace,

Pace, also in Berlin for the WHS event, offered an unusually personal description of the treatment she had also experienced as an African American diplomat at border crossings, including Frankfurt´s. 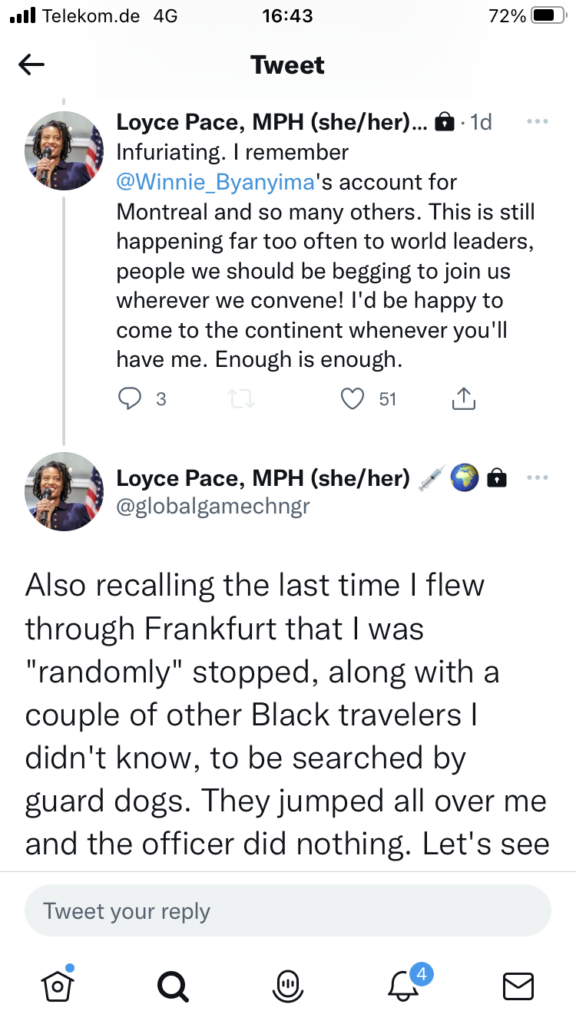 There was no reference to the incident at the official opening Sunday evening, which Ogwell did not attend. Asked by Health Policy Watch for comment,  a WHS spokesperson confirmed that Ogwell had arrived in Berlin, adding:

“We consider the situation of Dr Ogwell to be very concerning and we hope that the situation clears up quickly. Dr Ogwell’s voice and expertise, and that of the Africa CDC, are of the utmost importance and are essential to the World Health Summit,” the spokesperson said.

“It is absolutely critical that all WHS 2022 participants from Africa and all other countries are treated with respect. …WHO and the World Health Summit are both dedicated to the well-being of all people, the key to achieving better health for all lies in collaboration and open dialogue. This is what WHS 2022 stands for.”

However, in the early hours of Monday morning, Ogwell confirmed on Twitter that he had returned home:

Good morning. I’m safely back in #Africa, home to the most resilient human beings I know. From the @Airport_FRA immigration misadventure I share some lessons:
1) Don’t reduce ur dignity to fit someone else’s prejudices – you’ll be feeding a wolf that will one day devour you/2

Meanwhile,  Yassen Tcholakov, attending the WHS on behalf of the World Medical Association,  suggested: “Maybe we should simply change where global conferences are held. If Europe and North America are unable to act as hosts maybe they shouldn’t be any longer.”

Most elaborate Summit to date

As the first WHS to be co-sponsored by the WHO, this year´s summit is the most elaborate to date, with several thousand participants in attendance, along with Pace, Germany´s Chancellor, and most of WHO’s senior staff from around the world on hand.

Ironically, the African Union is also one of the co-sponsors of the three-day summit, with Senegal’s president Macky Sall, current chairperson of the African Union, offering a video-taped address.

Former Africa CDC director, Dr John Nkengasong, now the US Global AIDS coordinator, appeared in person where he was honoured at the opening ceremony as the recipient of an award for his global public health career of service.

Today, I come to Berlin as a trustee inspired and with renewed dedication to global health. I accept #VirchowPrize2022 on behalf of all women and men who are engaged in the fight to break down barriers in global health inequities.#WHS2022 #VirchowPrize22 pic.twitter.com/cFockG6eYQ

“Wealthier countries and international financial institutions need to support developing countries to make these crucial investments,” said Guterres in a pre-recorded address to the gathering.

The climate crisis also received a nod from the high-level speakers, with Sol noting the ¨interdependence, between climate change, food crisis and public health.¨

“We should take one message from the protestors…It is an emergency,” said Axel Pries, WHS president at the close of the ceremony.

WHO takes global health to a new level

WHO´s Director-General Dr Tedros Adhanom Ghebreyesus called upon world leaders to “take global health to a new level” in a three-pronged approach that would include approving a new pandemic accord; developing new tools to finance and respond to global health crises, and; taking a more preventive approach to health, including by embedding health promotion and disease prevention into areas ranging from urban transport design to finance.

Tedros also denounced critics of the proposed new pandemic accord.  Those naysayers include some conservative American media celebrities who have tried to claim that a pandemic agreement would lead to an erosion of sovereignty:

“The claim by some that this accord is an infringement of national sovereignty is quite simply wrong,” Tedros said.

¨It will not give WHO any powers to do anything without the express permission of sovereign nation-states. If nations can negotiate treaties against threats of our own making, like nuclear, chemical and biological weapons, tobacco, and climate change, then surely it makes sense for countries to agree on a common approach to a common threat that we did not fully create and cannot fully control – a threat that comes from our relationship with nature itself.¨

Together, the COVID-19 crisis and Russia´s invasion of Ukraine have undermined decades of progress in global health, said Sandra Gallina, the European Commission´s director general of health and food safety.

But looking out at the plenary room packed with over 1200 participants, including hundreds of others in overflow rooms, she added: ¨I have never seen such a crowd for health. We must require robust international rules, including a pandemic agreement. We are stretching our hands out to others to join us in this effort to  deliver a more equitable global health order.¨

From diagnostics to air pollution – WHS agenda is ambitious

Already in the first day of the conference, the agenda´s menu was huge reflecting perhaps a pent-up appetite for the kinds of thematic debates that cannot as easily take place in the halls of WHO’s governing body, the World Health Assembly, where governments not global health experts set more of the tone.

Workshops and seminar sessions ranged from the more upstream topics, such as the architecture of pandemic response, to the more familiar ground of  HIV/AIDS, air pollution, and on down to the nitty-gritty of improved diagnostics.

While COVID has drawn tremendous attention to the importance of equitable access to vaccines and treatments, access to fast-changing technologies remains deeply pockmarked with inequalities, And that poses problems for future outbreak response, said Bill Rodriguez, executive director of the Geneva-based Foundation for Innovative New Diagnostics (FIND).

.@BillRodriguezID on #diagnosics at #WHS2022: “the future has already arrived but it is just unequally distributed” patient-centered and integrated testing is key for improved #access and health systems strengthening. pic.twitter.com/k6Lo6uZeRo

Many health systems have yet to ensure access to reliable tests at ¨point of care¨, including self-testing for billions of people around the world, Rodriguez said at a session co-organized by the Konrad Adenauer Foundation and the German Health Federation.

Another high-profile session, a “Ports to Arms Approach to Access” discussed the successes and shortcomings of the Access to Tools Accelerator (ACT-A) – and whether a ¨supercharged¨ ACT-A could still play a role in future pandemic response.

The ACT-A initiative, much vaunted by WHO at the start of the pandemic as a truly multilateral effort to ensure equity, has become a focus of debate between those who still tout its achievements and critics who say it was birthed with a paternalistic taint, which ultimately failed to ensure faster and fairer distribution of vaccines, treatments and tests across the developing world.

The #WHS2022 session "Ports to Arms Approach to Access – Supercharging ACT-A for Future Pandemics" starts in 30 minutes, if you are not here in Berlin, watch the livestream.

Longstanding challenges such as polio eradication also got a boost. Notably, the Bill and Melinda Gates Foundation pledged some $1.35 billion to the Global Polio Eradication Initiative, which has seen serious setbacks ranging from new outbreaks of wild polio virus in Pakistan and Africa to a rash of vaccine-derived polio cases extending from New York to Jerusalem.

The Gates Foundation announcement, following a commitment from Germany for $35 million to polio, was, however, an ironic reminder of the continued distortions in the public health finance landscape,

Despite the ambitious new vision embodied in the World Bank´s new Financial Intermediary Fund (FIF), the scale of the Gates Foundation commitment, as compared to that of Germany, was also a striking reminder that the world´s largest foundations and philanthropies are still carry an outsized load, as compared to governments, when it comes to global health finance,

¨A reminder of who calls the shots in public health,¨ tweeted one WHS participant, Katri Bertram, acerbically, with the hashtag, #Followthemoney.

A reminder who calls the shots in #globalhealth. After 35mn announced by the German Chancellor, Bill Gates announces 1.2BN. #FollowTheMoney #WHS2022 pic.twitter.com/PsYcjdmD5W