Globally, political resistance to assertive climate action remains an enormous barrier to change, despite mounting evidence about the impacts of climate change on people’s well-being and health, said Angel Gurria, secretary general of the Organisation of Economic Co-operation and Development (OECD), before an audience of several hundred people in Geneva today.

Reframing the climate debate in more people-centered terms is critical to overcoming the naysayers; so the OECD will publish a report on “Climate Change Mitigation through a Well-being Lens” ahead of the UN Climate Summit in September, said Gurria, speaking at Geneva’s Graduate Institute of International and Development Studies in the fourth of a series of biennial climate lectures. 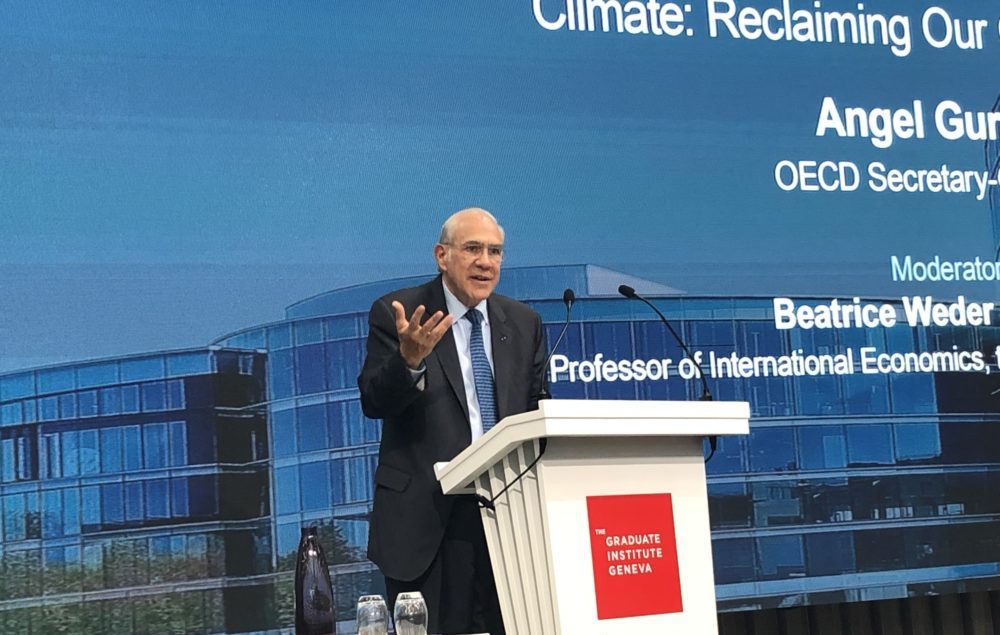 As one recent example of political ambivalence, Gurria cited the convoluted language on climate that emerged out of last week’s G-20 meeting in Osaka Japan where: “G20 countries ‘agreed to disagree’ on committing to fully implement the Paris Agreement.”

Gurria was referring to the final G20 declaration, in which the United States reiterated its decision to withdraw from the Paris Agreement, while other G20 nations reaffirmed their commitment to its “full implementation,” although adding a politically-laden caveat: “reflecting common but differentiated responsibilities and respective capabilities, in the light of different national circumstances.”

Departing from his prepared remarks, Gurria offered a colourful description of the intense negotiations between the Group of 20 leaders of the world’s most industrialised nations over the final climate text.

“You cannot imagine how difficult it was,” he related. “We took it to the leaders, Macron, Merkel, Theresa May, Trump.” Referring to the urgent, direct consultations that took place between France, Germany, the United Kingdom, the USA and others over the final draft, he observed that: “It looked like a rugby scrump.”

“Without their participation we wouldn’t have had any language in the G20,” he said, adding: “And imagine if the G20 does not come out with some language about climate change. It’s like you are ignoring the single most important inter-generational responsibility that we have today, and you cannot even agree on the words you are going to produce. We came very close.”

In deeds, as well as in words, politicians are moving one step forward and two steps back, noted Gurria.

On the positive side, there have been a wave of commitments from some of the OECD‘s 36 member countries, as well as others, to combat climate change: “The UK just went 14 days without coal-fired power. Costa Rica is on track to become the world’s first carbon-neutral nation. New Zealand has banned new permits for offshore oil and gas exploration. Norway is dropping fossil fuel investments from its national pension fund, the world’s biggest wealth fund, to redirect funds towards renewables. The new Danish government has pledged to up its 2030 emissions reduction target from 40 percent to 70 percent of 1990 emissions levels, and to ban the sale of all new diesel and petrol cars from that year [2030].”

Yet, at the same time, he observed: “the United States is ramping up oil and gas production with fracking… [and] Canada is seeking to expand its carbon-intensive oil sands industry. Australia just approved the construction of a coal mine which could become the world’s largest. Mexico has announced plans for the construction of a new coal power plant and a large oil refinery. In Brazil, logging in the Amazon rain forest is accelerating at an alarming rate.”

Meanwhile, he added, “China and India continue to drive global growth in coal demand, with coal-fired power generation increasing strongly in both countries in 2018. Despite a significant drop in fossil-fuel subsidies, Indonesia plans to nearly double coal use by 2025.”

The latest OECD report on fossil fuel subsidies, released just last month, showed that public spending to support fossil fuels increased by 5 percent over 2016 levels to US$ 340 billion in 2017.

“We are giving hundreds of billions to fossil fuels,” Gurria observed. “And nearly 80 percent of energy-related carbon emissions in OECD and G20 economies are not yet priced at even a conservative estimate of climate costs.”

The net result is that after a three-year plateau between 2014-2016, energy-related carbon dioxide emissions are accelerating again, reaching unprecedented levels in 2018, according to the latest global data.

Currently, the world is “treading a fine line” where rising temperatures could trigger dangerous “tipping points in the climate system,” beyond which climate change could go out of control and present scientific forecasts cannot predict the consequences, warned Gurria.

Already he said, “ocean acidification and warming is driving rapid and dramatic changes in marine ecosystems. Moreover, nearly one million species are threatened with extinction driven by our increasing demands for food and energy. We are now on the brink of the planet’s sixth major extinction. Our life support systems are at risk of failing.”

Against that dismal forecast, Gurria said that politicians need to “put people at the centre of climate action by looking at climate mitigation through a well-being lens.”

Doing so can create policy approaches that generate win-win outcomes, strengthening the case for early action.

Taking transport as a case in point, he observed that the “costs from a health perspective alone are considerable. The burden of air pollution from road transport in OECD countries and the BRICS [Brazil, Russia, India, China and South Africa] was around 3.2 million deaths and USD 5.1 trillion in 2015.”

Examined through “a well-being lens, we see that the transport sector should not aim at increasing physical movement but at enhancing accessibility, making it easier for everyone to reach destinations for goods, services, jobs and other activities,” he said, etching out an alternative vision of the future “where we don’t sit in our cars, but reallocate road space for all users and activities – walking, cycling, public transport and cars.”

Hearkening back to how the 1987 UN report “Our Common Future,” led by former Norwegian Prime Minister Gro Harlem Brundtland, was a milestone in defining the challenge of “sustainable development,” Gurria said that present-day political leaders owe it to the next generation to “reclaim our common future” by taking concrete actions soon.

Those should include a “meaningful” price on carbon, an “end to subsidised fossil fuels and a phase-out of coal,” he asserted.

“Human well-being is the ultimate goal of both environmental and developmental policies. If it doesn’t translate into well-being it is not worth the paper it is written on. Thirty years ago a lot of what the Brundtland report talked about was intuitive. Today we know more. A generation later this call for responsibility resonates even more.”

“Our failure to decisively act on climate today mortgages the prospects for our children to benefit from the climate conditions that have allowed us and mankind for the last 10,000 years to thrive… [T]hey may not have that privilege. The choices we make today determine what we will bequeath to our descendants.”

“Our children, youth, are angry; they have every right to be,” he said, recalling the wave of recent youth strikes and protest over climate change.

“We have already squandered precious time… and we are living the consequences of climate destruction. Our policies have to be made with our children’s future in mind.”