A sweeping World Health Organization report on Climate and Health, published just ahead of a critical Glasgow climate conference (COP 26)  that begins 31 October, has declared that “the burning of fossil fuels is killing us” –  the bluntest denunciation to date by the global health agency of societies’ fossil fuel addiction.

“Climate change is the single biggest health threat facing humanity,” adds the report, whose publication was accompanied by an open appeal to governments, signed by some 300 health organizations representing 45 million health workers worldwide – two-thirds of the global health workforce.

The “COP26 Special Report on Climate Change and Health” provides little in the way of brand-new data on a much-discussed issue.  But it is the boldest yet of WHO’s recent statements on increasingly alarming trends – leading to more extreme heat episodes, fires, floods, and droughts, and air pollution – which in turn create a cascade of health effects.

“There are 45 million plus health care professionals who are witnesses to the health emergency that is unfolding in plain sight,” said Howard Catton, CEO of the International Council of Nurses.

“They see and work with young … and old people struggling with respiratory disorders caused or exacerbated by poor air quality and pollution… people with heatstroke, exhaustion and hypothermia,” said Howard Catton, CEO of the International Council of Nurses, which played a major role in mustering the health community to its appeal for action.

“They support people who are not coping with extreme temperature changes from heat stroke and exhaustion to hypothermia….

“And they see and experience extreme events and disasters like flooding and forest fires which resulted from spreading infectious diseases, including vector borne diseases, the contamination of food and water that people can’t avoid.

“They see that the impact is not just on people’s physical health, but on their mental health, depression, anxiety, grief, isolation symptoms of post traumatic stress disorder,” he added.

“The planet has become the patient.”

Despite its harsh tone, the report provides no new estimate for how many lives a year are being lost to climate change directly, said Dr Diarmid Campbell-Lendrum, one of the leaders of the report.  He acknowledged that the most recent WHO study estimated projected deaths from climate change at around 230,000 people a year by the year 2030 – which admittedly only looked at a “small proportion of the ways in climate change affects health.”  Those estimates also omitted a critical issue, the impacts of extreme heat on health – which is increasingly affecting not only older people but also workers in construction, agriculture and other outdoor occupations.

Even so, dramatically reducing the burning of fossil fuels, as well as domestic burning of wood and biomass for cooking and heating, would slash deaths from air pollution by 80%, saving some 5.6 million lives a year, said Dr Maria Neira, Director of WHO’s Department of Environment, Climate and Health, which coordinated the report.

And while the most heavy health burden from climate change tends falls upon people living in low- and middle-income countries whose homes, food security and livelihoods are more directly impacted by more extreme weather, people in high-income countries are feeling, more and more, the impacts of climate-related drought, fires and flooding, and extreme heat – as evidenced by the wildfires, flooding and heat extremes, seen over the past two years in countries ranging from Australia, to Germany and the United States.

… Populations that we thought were relatively immune from climate change, those living in developed countries are in fact much more vulnerable than we thought, including to things like heat stress,” Campbell-Lendrum said.

Billed as a template for action in 10 critical areas – from healthier cities to healthier energy supplies – the report strikes a forward-looking note, citing the solutions available if only sufficient money and political are invested in the climate issue. 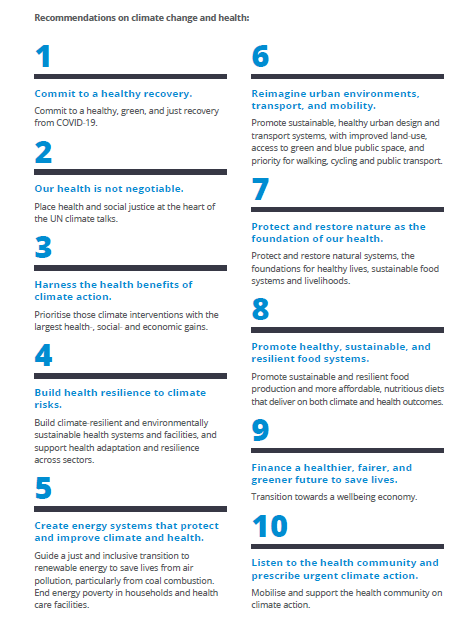 The report zeroes into more detail on four key areas of action:

The emphasis, said Neira, should be on the positive benefits that can be generated for people with the right set of climate actions.

“The positive message on the health argument is that whatever you do to tackle the causes of climate change will have enormous benefit for the health of the people,” Neira pointed out – and that argument goes beyond the 5.6 million lives that could be saved from cleaner air.

“If you do the transformation that is needed in terms of sustainable force food systems, the healthy diets that will result, will prevent as well 5.1 million deaths every year. Plus, all the benefits will come from transport, physical activity. Our society needs to understand that tackling the causes of climate change …probably have a big opportunity,” Neira stressed, adding that whatever investment is spent would be far outweighed by the savings obtained in human lives, productivity and healthcare costs.

Presently, however, as economies around the world continue to pump billions into economic recovery from the COVID pandemic, monies still aren’t being invested into climate-friendly economic stimuli, Campbell-Lendrum pointed out:

“We still see that about 80% of those are investments according to the OECD, are either neutral or harmful for the environment, we have to bring that balance more towards a greener recovery.”

The report also calls upon the health sector to start greening its own backyard – by creating more sustainable and climate resilient health facilities.

“If the health sector was a country it would be the fifth largest climate emitter in the world,” declared Neira, referring to the very high carbon footprint of health facilities in most developed countries – second only to the leisure industry in terms of building energy and water demand.

The same facilities are also major generators of plastic and other types of waste from the use of single use health products – often unavoidable. At the same time, facilities in low- and middle-income countries may lack adequate access to electricity and safe water supplies for hygiene and basic health care operations, like maternal and newborn delivery.  Extreme heat in poorly designed and ventilated facilities create huge risks for women in labour, increasing risks of haemorrhage, as well as their newborns – and particularly premature babies – who are more vulnerable to dehydration and lack adequate physiological mechanisms for heat control.

“This report shows that there are ways to limit climate change that can also improve our wellbeing,” said Cheryl Moore, Director of Research Programmes at Wellcome Trust, which has made climate change one of its premier strategic priorities:

“We’ve spent too long thinking about these issues in isolation; now is the time to focus our efforts on a global, unified strategy to safeguard human health, and that of the planet. It will require all of us working together – now and for the decades to come.”