While India’s COVID-19 pandemic continues to burn through that country’s health system, concerns are mounting that Latin America may become the next global pandemic flashpoint — issues that the World Health Organization (WHO) is rightly trying to highlight to its broad global constituency of policymakers, influencers, and the general public.

All the more reason why it was surprising that the WHO chose to underscore the dimensions of Latin America’s plight by featuring Brazil’s new, and controversial, health minister Marcelo Querioga at its biweekly media briefing.

The move set off a storm of social media commentary over what appeared to effectively showcase an alliance with the government of President Jair Bolsonaro – who has personally denied the dangers of COVID-19 and chalked up one of the worst global records for managing the pandemic. 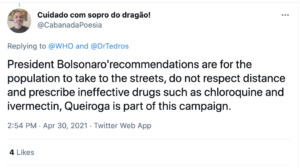 Not only is the track record abysmal, but  Bolsonaro has consistently ignored or undermined basic WHO advice on measures such as mask-wearing in public.  He has advocated the use of drugs discredited by WHO, such as hydroxychloroquine, as well as the importance of vaccines – which Brazil only belatedly began to aggressively seek out and acquire – despite its scientific and economic means.

The catastrophe has been such that it has given rise not only to a huge death toll – but also the rise of a new, and dangerous variant.  That, in turn, has cast a shadow over the rest of Latin America, as observed in a New York Times article: “living side-by-side with Brazil, a country of more than 200 million whose president has consistently dismissed the threat of the virus and denounced measures to control it, helping fuel a dangerous variant that is now stalking the continent.”

Granted the WHO stage, Queiroga, the fourth health minister to have been appointed in the past year, was at pains to say that he is now trying to bolster his country’s vaccination drive since taking office on 23 April.

“First, I have committed myself to ensuring there is an acceleration in vaccination across the country and this has been done by increasing the access to doses of vaccines and ensuring that there is better efficacy in the distribution of the vaccines,” Queiroga told the WHO briefing.

Indeed, Brazil’s Fiocruz Institute is providing fill-and-finish services for AstraZeneca vaccines, while its Butantan Institute is doing the same for the Chinese vaccine, Sinovac, said Queiroga. But outside experts say that that can be credited more to the long scientific record of Fiocruz and other Brazilian instiutes, than any recent government moves.

Queiroga did, however, provide new support for “clear and objective” guidance on “non-pharmacological measures that need to be followed in the fight against COVID-19, such as using masks, hand hygiene, and respecting social distancing.”

That was in stark contrast to Bolsonaro’s statements railing at mask-wearing as recently as late February during the height of the country’s second wave. And so it remains to be seen if the president also will heed the advice of his new health minister.

Queiroga also did not mention at the briefing that his ministry is preparing a protocol for the use of Ivermectin and hydroxychloroquine against COVID-19, treatments that are favoured by Bolsonaro – even though WHO has explicitly discouraged their use after large-scale studies found them ineffective. 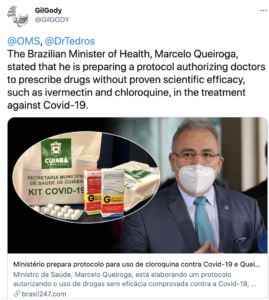 Along with a social media storm, the appearance also sent ripples through WHO’s ranks – which has a significant constituency of Brazilian and Latin American technical staff posted not only in the region, but across the worldwide organization.

As one senior WHO scientist told Health Policy Watch: “I am nauseated. What has been done right in this pandemic in Brazil has been done despite the national government.”

He added that there was a parliamentary inquiry into the role of the president in the pandemic, but “it looks like WHO is backing the government. Why? It only makes our work more difficult”.

Meanwhile, Queiroga failed to answer most of the questions from the media and left the press briefing early.

WHO Director-General Tedros Adhanom Ghebreyesus reported that “Brazil is scaling up the domestic production of COVID-19 vaccines and has joined the World Trade Organisation (WTO) initiative to increase vaccine production through technology transfer.”

In terms of access to vaccines, still sorely lacking in most of lower-income Latin America, Queiroga appeared to offer an olive branch to critics, saying:

“We are looking at the discussions that are currently underway in the WTO on protecting intellectual property.  We defend that there should be access to vaccines and that they should be made available immediately because they should be considered a public good.”

That statement was striking, insofar as Brazil has been one of the only developing countries to oppose the India-South Africa proposal for a WTO waiver on intellectual property for the duration of the pandemic. Brazil’s opposition to the waiver has also triggered widespread internal criticism. Brazilian parliamentarians  penned an open letter recently saying that the position flails in the face of Brazil long tradition of supporting public access to essential medicines.

Quieroga did not reverse the country’s stance on that matter at his briefing, but rather appeared to be seeking a middle ground on the polarizing issue. He stressed that Brazil was in favour of “reaching a consensus” on the way forward, adding that existing flexibilities in IP and trade rules need to be used more effectively:

“Brazil understands that the TRIPS agreement does have a number of flexibilities regarding innovation, which are included in the Doha Declaration on TRIPS and public health, and this includes the principle of what is in the public interest to fight health crises.”

He also called on pharmaceutical manufacturers to “ensure that agreements for licensing and technology transfer are facilitated as well as facilitation of expertise and know-how”.

“We need to identify any commercial barrier to producing and distributing these products, including anything linked to intellectual property,” he added.

Brazil has reported over 14,5 million cases of COVID-19 and over 420,000 deaths since the pandemic started. Its cases increased by 2% in the past week, and most ICU beds have been full during April.

The P.1 variant first identified in Brazil is 2.5 times more contagious than the original wild type virus and became the dominant strain in the country in just seven weeks, sweeping through the 200 million strong population from early November.

Brazil’s reluctance to impose restrictions on its citizens has exacerbated the spread of the variant, which is now believed to be driving case increases in the region.

Ciro Ugarte, director of health emergencies in the WHO region of the Americas and the Pan American Health Organisation (PAHO), told the briefing that most countries in South America were starting to experience case increases.

These range from a 54% increase in Ecuador, to 19% in Honduras, 13% in Bolivia and single-digit increases in Uruguay, Peru and  Colombia, according to Worldometer.

But even a modest weekly increase of 3% in Colombia has meant that “ICU beds are running out in major metropolitan cities like Bogota and Medellin”, said Ugarte.

“Several countries in our region are reporting increases in COVID-19 cases in their younger populations. These are linked to increased exposure and no vaccination in these groups, as most countries have few vaccines and are applying them to vulnerable older groups and health care workers.”

COVAX has only been able to deliver 7.3 million doses of vaccines in Latin America and the Caribbean so far.

“Many countries cannot afford large bilateral deals with producers and are relying on COVAX for vaccines, but the outlook is not optimistic for increased supplies soon,” added Urgarte.