Almost three years of harsh lockdowns, enforced quarantines in state facilities and daily testing have tried the patience of many Chinese people, who since Friday have taken to the streets from Shanghai and Nanjing in the east, to central Chengdu and Wuhan and Urumqi and Korla in the north and west.

While scores of people have been arrested, protestors have also won some concessions. In Urumqi, where four million people have been in lockdown for over 100 days, officials announced on Monday that it would allow people to travel on buses to do errands and parcel deliveries would resume.

Meanwhile, Beijing officials also announced on Sunday that lockdowns of residential areas would not be enforced for longer than 24 hours.

These are small indications that Chinese leader Xi Jinping’s “zero-COVID” policy is becoming increasingly impossible to enforce in the face of people’s growing anger and desperation.

Two weeks ago, China’s State Council cut compulsory quarantine in a state facility for international visitors and the close contacts of people with COVID from seven to five days, with a further three days at home. It also did away with restrictions on secondary contacts.

But a surge in COVID cases in Beijing was followed swiftly by lockdowns, school and restaurant closures, dampening hopes that the country was quietly abandoning the zero-COVID approach.

China is trying to both quell and downplay the protests. On Monday, there was increased military and police deployment at sites of weekend protests, and BBC reporter Ed Lawrence was arrested and reportedly assaulted in police custody in Shanghai while reporting on the protests.

The weekend protests were sparked by the deaths of 10 people in a fire in an apartment building in Urumqi, the capital of Xinjiang, on Thursday.

The screams of people trapped in the burning building last Thursday were captured on social media amid reports that apartment doors had been closed from the outside to enforce the city’s lockdown. Firefighters took more than three hours to stop the fire as cars blocked their path – many with flat batteries after months of not being driven.

Sealing the doors of COVID-19 contacts is reported to be a common occurrence in China as part of the country’s enforced lockdowns.

Outrage at the deaths in Urumqi led to vigils and protests being arranged in Shanghai, Xi’an, Chongqing and Nanjing, as well as various university campuses, and people turned up in their thousands at some of the protests. Amid chants of ‘Lift lockdown’, ‘No PCR test’ and “We want freedom’, anti-Xi and anti-Communist Party chanting could also be heard.

Many people carried blank sheets of white paper to symbolise government censorship, but reports on the protests on Weibo, the Chinese social media platform, were short-lived.

Back in May, WHO Secretary-General Dr Tedros Adhanom Ghebreyesus told a media briefing that China’s strategy was no longer sustainable in the face of the more infectious but less lethal Omicron.

“When we talk about the zero-COVID strategy, we don’t think that it’s sustainable, considering the behaviour of the virus now and what we anticipate in the future,” said Tedros, prompting a rebuke from Chinese officials

Aside from its zero-COVID policy, China’s vaccines, Sinopharm and Coronavac, are only about 60% effective against severe infection in comparison to over 90% protection offered by mRNA vaccines.

However, it is possible that China will still have its reckoning with COVID as its weary citizens resist further controls and the highly infectious virus spreads through a population with little immunity.

Global data analysis group Airfinity estimates that 1.3 and 2.1 million lives could be at risk if China lifts its zero-COVID policy “given low vaccination and booster rates as well as a lack of hybrid immunity”.

It based its risk analysis on the cumulative peak cases and deaths from Hong Kong’s BA.1 wave as a proxy for mainland China.

“Mainland China has very low levels of immunity across its population. Its citizens were vaccinated with domestically produced jabs Sinovac and Sinopharm which have been proven to have significantly lower efficacy and provide less protection against infection and death,” Airfinity said in a statement on Monday. 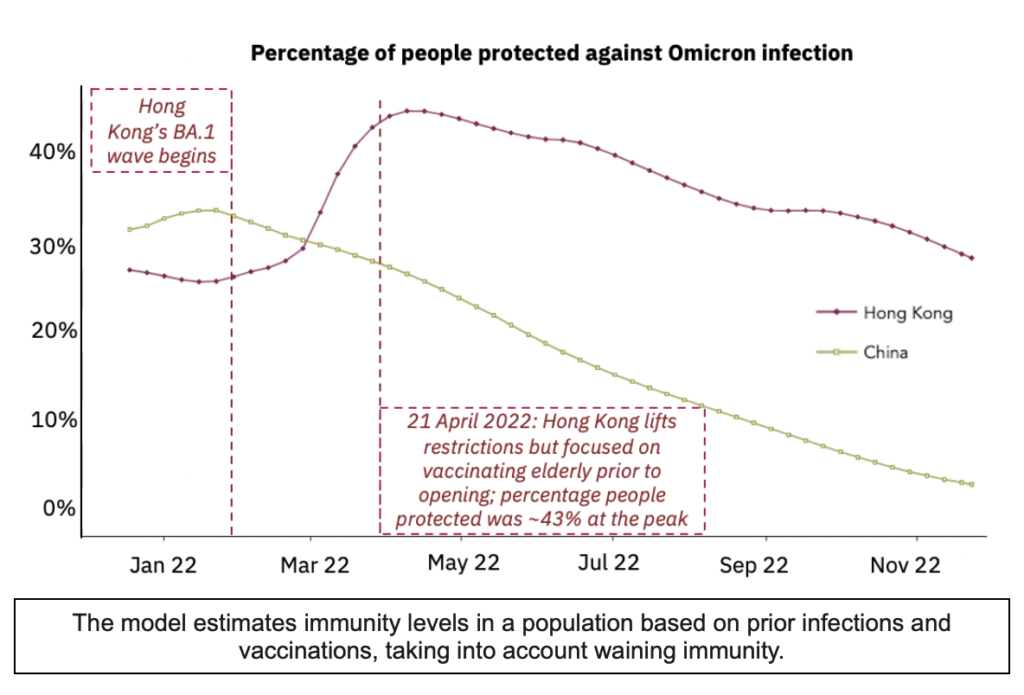 “This vaccine-induced immunity has waned over time and with low booster uptake and no natural infections, the population is more susceptible to severe disease. China’s current booster uptake is 40%, whilst Hong Kong’s primary series uptake was 34% back in February 2022 when it saw a large spike in cases due to the BA.1 omicron variant,” said Airfinity.

Dr Louise Blair, Airfinity’s head of vaccines and epidemiology,  called on China to “ramp up vaccinations to raise immunity in order to lift its zero-COVID policy, especially given how large its elderly population is”.

Blair said that China needs “hybrid immunity” from both vaccinations and infections to ensure  “much less impactful and deadly COVID-19 waves”.

Prior to the national weekend protests, there have been intense local protests, particularly at the Foxconn facility in Zhengzhou, which makes 70% of the Apple’s iPhones.

Workers work long shifts and usually stay in massive factory dormitories that can house up to 300,000 people.

But after a small COVID outbreak in the city in October, Foxconn closed the dining halls and introduced “closed loop” production to cut workers’ contact with the outside world to meet production demands for the launch of the iPhone14. Tesla and other factories have used this approach during lockdowns in Shanghai in March.

But Foxconn workers started to panic in fear of being forcibly quarantined there, and have clashed a number of times with police.

Numerous reports of poor treatment and neglect at state quarantine facilities have also leaked out in public, alongside videos of small children removed from COVID-exposed parents being forced to fend for themselves in such facilities.