In the coming months, 600 million doses of single-shot Johnson & Johnson vaccines, manufactured in Hyderabad, are likely to be exported to Europe or the United States, at a time when India grapples with vaccinating its own citizens. Civil-society organisations are concerned that millions of doses of the COVID-19 vaccine may end up in the developed world, in regions with already high vaccination rates.

India recorded around 30,000 to 40,000 new COVID cases on most days in September. Only 14 percent of the population is fully inoculated against the virus. Prime Minister Narendra Modi’s government promised to fully vaccinate the nation’s adult population by the end of 2021, a target impossible to reach if India, under pressure from developed nations, exports most of the doses. Concerns regarding the destination of these vaccine doses are especially relevant ahead of the Quadrilateral Security Dialogue, or the QUAD—a summit of the leaders of the United States, India, Japan and Australia that is to be held in late September. Modi will be headed to Washington for the meeting, where vaccines are likely to be discussed.

Moreover, on 20 September, Mansukh Mandaviya, Minister of Health, announced that India will resume exporting COVID-19 vaccines beginning next month —after shipments were halted in April due as the country was struck by a brutal second wave of the pandemic.  The Indian export ban hit hardest on Africa which was suppoed to receive hundreds of millions of doses of AstraZeneca vaccines, produced by the Serum Institute of India, through the WHO co-sponsored global COVAX vaccine facility.

“We welcome the lifting of restrictions but the vaccines have to go where there are needed most,” Leena Menghaney, the South-Asia Head for the access campaign by Médecins Sans Frontières, or Doctors Without Borders, said. “When India starts sharing vaccines with developing nations, the variants can be controlled. However, we need an account of supplies from J&J.” Menghaney mentioned an affidavit that the union government had submitted before the Supreme Court on 29 April that said that “a made in India J&J vaccine is expected to be available from August 2021.” Menghaney said, “We need an account [of] that.”

The letter also noted that this was not the first time.  “J&J has behaved negligently and callously in South Africa,” the civil society organizations stated, recalling how earlier this year, South Africa’s Aspen Pharmacare was contracted by J&J to produce 300 million doses of the J&J vaccine on a “fill and finish” basis – most of which were then shipped to Europe.

“At the moment, J&J has unfulfilled orders from the EU and the US among other rich countries, all of whom have been hoarding and ordering doses in excess of their domestic needs. There is undoubtedly much money to be made by fulfilling these contracts. But these countries are not where vaccines are most needed,” the letter also stated.

“As things stand, these vaccines will likely be exported to the European Union (EU) and the United States (US), where more than 50% of adults have been fully vaccinated, instead of going to India, which has only vaccinated 13% of its population to date, or to the African continent, where the equivalent figure is 3%.”

Neither J&J nor India’s government have yet clarified where the doses being produced in India are headed. The COVID-19 Vaccines Global Access, or COVAX, co-led by the global vaccine alliance Gavi, did not respond to specific queries about doses expected from India. COVAX is a worldwide initiative that aims to ensure equitable access to COVID-19 vaccines. In response to questions sent on 17 September, a GAVI spokesperson wrote, “In the face of ongoing Indian export restrictions, supply of doses from India continues to be blocked. Given the successful ramp-up of domestic production and the diminishing intensity of its own outbreak, we hope that India will ease its restrictions so that the world’s vaccine powerhouse can contribute to fighting the pandemic abroad as well as at home.”

Earlier this month, a report in the Washington Post noted that the pressure on India to resume exports of vaccines “comes as wealthy nations, including the United States, move to offer coronavirus booster shots to their own vaccinated residents.” On 15 September, Reuters reported that according to an anonymous Indian official, the country is considering resuming exports of vaccines, mainly to Africa. It quoted the official as saying, “The export decision is a done deal.” Yet, there is little clarity on how many doses will be exported out of India. As on 29 May, the Modi government had sold or donated nearly 66.4 million doses to other countries.

The Indian drug regulatory authority provided a rapid emergency-use authorisation to the J&J vaccine in August this year. J&J’s single-dose vaccine is being manufactured in India by Biological E, a Hyderabad-based company. The company’s managing director, Mahima Datla, told Nature, an international journal, that her company hopes to manufacture 40 million doses every month, though she does not know where they will go. “The decision on where they will be exported, and at what price, is under the purview of J&J completely,” she told Nature.

The letter by civil society organisations said that “J&J does not care about developing countries except when forced to.” In the case of the South African-produced J&J doses, for instance, only after there was a backlash from activists, did the European Union agree to send millions of coronavirus vaccine doses back to the continent. The continent has the lowest vaccine coverage in the world, with less than 3% of its population fully vaccinated.

African countries have fared the worst from global vaccine policies

African nations have thus been facing the worst end of global vaccine policies, in what is being termed “vaccine apartheid.”

Strive Masiyiwa, an official of the African Union, told the media in July of this year, “When we go to talk to their manufacturers, they tell us they’re completely maxed out meeting the needs of Europe, we’re referred to India.” He pointed out that the EU—while directing African nations to India—also imposed public-health restrictions on people vaccinated with Covishield, the India-produced version of the EU-accepted AstraZeneca vaccine. “So how do we get to the situation where they give money to COVAX, who go to India to purchase vaccines, and then they tell us those vaccines are not valid?” Masiyiwa said.

While hoarding vaccines, rich nations have also been opposing a proposal initiated by India and South Africa last October to waive obligations under the Trade-Related Aspects of Intellectual Property Rights, or TRIPS agreement, to make COVID-19 technologies, including vaccines, quickly accessible across the world. The countries cite quality concerns, among others, as the basis of their opposition, while outsourcing manufacturing to India and South Africa.

“The countries that are blocking the TRIPS waiver want it both ways,” Tahir Amin, an intellectual-property expert and co-founder of the non-profit Initiative for Medicines, Access & Knowledge (I-MAK), said. The countries opposing the waiver “are happy to exploit countries who support the TRIPS waiver proposal by having them produce vaccines for their own needs.” But, Amin said, these countries do not help those in support of the waiver “develop the capability or capacity to scale up more supplies to help themselves and others. The level of hypocrisy and ability to speak out of both sides of the mouth by the leaders of the EU, UK and Germany would be laughable if this were not such a serious situation.”

‘In the middle of a pandemic, J&J can choose who it most wants to send vaccines to, regardless of where they are most needed’

Achal Prabhala, the coordinator of the AccessIBSA Project—which campaigns for access to medicines and is one of the signatories of the 16 September letter—told me, “In the middle of a pandemic, I’m outraged that J&J thinks it can choose who it most wants to send vaccines to, regardless of where they are most needed.” Prabhala, who is also a fellow at the Shuttleworth Foundation, a South African philanthropic organisation, said that J&J’s calculations are likely to consider which country ordered vaccines first or offered the most money for them. “Our calculation—as we state in the letter—is simpler: who needs them most? That’s where they should go,” he said.

The letter by members of Indian civil society stated, “Vaccines are most needed in India and the African continent, and by the COVAX Facility, a global philanthropic initiative to get vaccines to the poorest countries in the world. Developing countries with large unvaccinated populations are witnessing a frightening rise in infections and deaths from COVID-19. J&J must prioritise them.”

“The fact that these doses are being produced with Indian labour, on Indian soil, gives us a say in where they go,” Prabhala said. “And we want them to go to India, the African Union, and the COVAX Facility—and nowhere else. Recent history suggests that J&J won’t set rational, humane, priorities unless we force them to—so we’re doing that.”

The COVAX supply forecast—overview of the supply of vaccines to COVAX—for September 2021 noted, “production issues at J&J’s Emergent facility (which is assigned to supply COVAX) have led to delays. While production has now restarted, the manufacturing ramp-up combined with the backlog of orders for other bilateral customers has led to delayed timelines and lower volumes that will be made available to COVAX in 2021.”  In April, the facility was forced to suspend operations and dump millions of doses of vaccines, due to contamination issues at the Baltimore, USA-based plant.

In their letter, Indian civil-society organisations urged US President Joe Biden to compel J&J to partner with drug companies in the global south, to move towards vaccine equity. “If US President Biden is indeed serious about vaccinating the world, his administration has the moral, legal, and if necessary, financial power to lift intellectual property barriers and persuade J&J to license its vaccine, with technology and assistance included, to every manufacturer currently engaged in making the Sputnik-V [Russian] vaccine,” the letter stated.

The policies in India, often called the pharmacy of the developing world, will be central to taming the pandemic in low- and lower-middle-income countries. Rajesh Bhushan, the health secretary, and Paul Stoffels, the vice chairman of the executive committee at J&J, did not respond to queries asking for a breakup of the J&J doses that will be given to India.

Republished, with permission from the India-based journal Caravan. 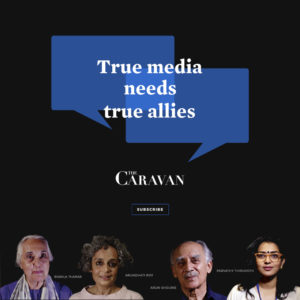 Vidya Krishnan is a global health reporter and a Nieman Fellow. Her first book “Phantom Plague: How Tuberculosis Shaped History” will be published in February 2022 by Public Affairs.