In its first guidelines ever for Ebola treatment, the World Health Organization (WHO) advises using two monoclonal antibodies — mAb114 (Ansuvimab®, also known as Ebanga®) and REGN-EB3 (Inmazeb®) — that were first approved by the US Food and Drug Administration for use against the Zaire ebolavirus species in 2020.

WHO says its “strong recommendations” for the two monoclonal antibody treatments that were released on Friday are based on a systematic review and meta-analysis of randomized clinical trials examining potential therapeutics for the deadly disease.

The two therapies demonstrated “clear benefits and therefore can be used for all patients confirmed positive for Ebola virus disease, including older people, pregnant and breastfeeding women, children and newborns born to mothers with confirmed Ebola within the first seven days after birth,” WHO says.

In its launch of the recommendations, WHO also called on the global community “to increase access to these lifesaving medicines”.  As relatively new therapies, monoclonal antibodies have been difficult and expensive to access in low- and middle-income countries, with 80% of their sales occuring in the US, Canada and Europe.  In 2020, a consortium of research organizations, led by Wellcome Trust issued a global call to action to expand access.

Yes to Ansuvimab and Inmazeb, No to ZMapp and Remdesivir

Patients should receive recommended neutralizing monoclonal antibodies as soon as possible after laboratory confirmation of diagnosis, according to WHO.

Its new 44-page guidelines for Ebola treatment also makes a “conditional recommendation against” the use of ZMapp and remdesivir for patients with the Ebola virus.

ZMapp, a drug cocktail of antibodies developed from the tobacco plant, was the first drug to be used on an experimental basis against the Ebola virus. Initially it showed promise with rhesus monkeys, but was not fully tested on humans.

During the 2014-2016 Ebola epidemic in West Africa, however, the US Food and Drug Administration (FDA) approved ZMapp’s experimental use on patients. That epidemic, the continent’s largest ever, killed more than 11,000 people out of the 28,000 people who became ill with the virus.

Subsequently, ZMapp, remdesivir as well as mAb114 and REGN-EB3 were all tested against one another in a randomized controlled trial in the Democratic Republic of Congo, running in parallel to the Ebola epidemic that wracked the eastern region of the country between 2018-2020.

In August 2019, however, an independent monitoring board recommended early termination of the DRC therapeutics trial due to the favorable results demonstrated by the latter two drug candidates.

The board recommended that all patients be randomized to receive either REGN-EB3 or mAb114 in an extension phase. The study’s preliminary results among 499 participants showed people who got REGN-EB3 or mAb114 had a greater chance of survival than those who received ZMapp or remdesivir.

Remdesivir was originally developed to treat hepatitis C before it was investigated for treating the Ebola and Marburg viruses, and then as a post-infection treatment for COVID‑19. It eventually won US and European Medicines Agency approval as a COVID-19 treatment. However, in November 2020, WHO recommended against Remdesivir use for COVID, saying there was “no evidence” it improved patient outcomes. 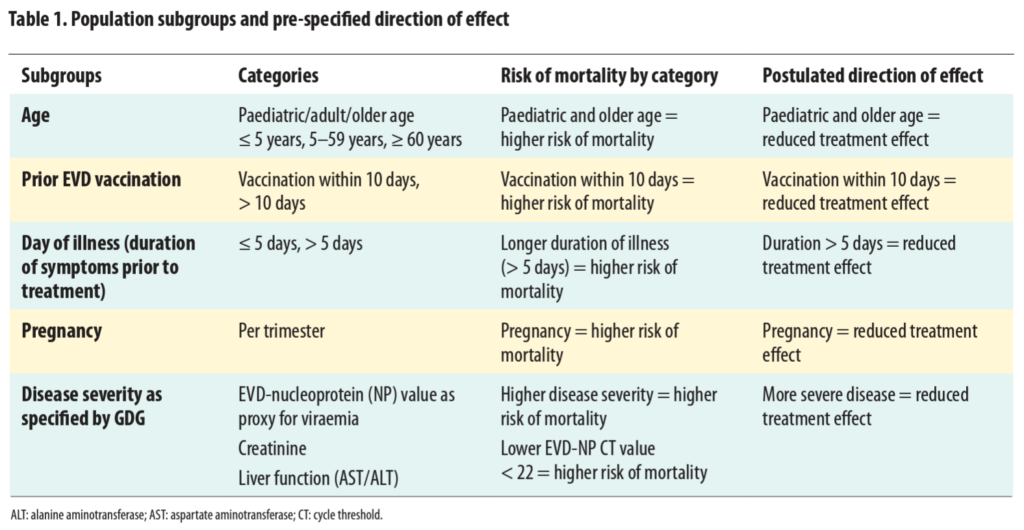 In its recommendations, WHO called for greater efforts to ensure that that the drugs are “where patients need them the most: where there is an active Ebola outbreak, or where the threat of outbreaks is high or very likely.”

To assist with that goal, WHO offered to support “countries, manufacturers and partners” to step up national and global efforts to increase affordability of the biotherapeutic products.

“Access to these therapeutics is challenging and pricing and future supply remain unknown, especially in resource-poor areas,” WHO says in its 44-page guidelines.

“Without concerted effort, access will remain limited, and it is therefore possible that this strong recommendation could exacerbate health inequity,” it says. “Therefore, given the demonstrated benefits for patients, these recommendations should act as a stimulus to engage all possible mechanisms to improve global access to these treatments.”

Both Inmazeb and Ebanga were developed with significant US government support

The development of both Inmazeb and Ebanga was heavily supported by the US government and other public funders.

Inmazeb, which also was the first FDA-approved treatment for Ebola, is produced by the US-based Regeneron Pharmaceuticals.

It was developed in response to the 2018 Ebola outbreak in the DRC with supprot from the US Biomedical Advanced Research and Development Authority (BARDA).

Regeneron announced in 2020, the company will “continue to provide Inmazeb for free in response to outbreaks in the DRC through the MEURI protocol for compassionate use,” in colaboration with the WHO, the US FDA and with continuing support from BARDA.

“Regeneron is actively working with nongovernmental organizations and public health agencies to ensure continued access to Inmazeb in low- and middle-income countries,” the company declared at that time. The MEURI protocol is a WHO-approved ethical framework for the use of investigational agents.

Regeneron gained fame in the first year of the COVID pandemic when former President Donald Trump was treated with another antibody cocktail that it had developed against COVID, (REGEN-COV- a combination of casirivimab and imdevimab) . The cocktail was later recommended by WHO for COVID treatment.

“Ebanga is currently available to patients, and Ridgeback Biotherapeutics provides and distributes the treatment to patients free of charge in Ebola-stricken countries,” the company states on its website.

WHO publishes invitation to drug manufacturers to share drugs for evaluation

WHO says it has now published the first invitation to manufacturers of therapeutics against Ebola virus disease to share their drugs for evaluation by the WHO Prequalification Unit, a crucial step to enabling bulk procurement of new drugs by global health agencies, for communities and countries affected by Ebola.

“We have seen incredible advances in both the quality and safety of clinical care during Ebola outbreaks,” said Dr Janet Diaz, lead of the clinical management unit in WHO’s Health Emergencies program.

“Doing the basics well, including early diagnosis, providing optimized supportive care with the evaluation of new therapeutics under clinical trials, has transformed what is possible during Ebola outbreaks,” she said. “This is what has led to development of a new standard of care for patients. However, timely access to these lifesaving interventions has to be a priority.”

WHO also says there is a need for more research and evaluation of clinical interventions because of the large number of “uncertainties” that remain including with supportive care, with our understanding and characterization of the Ebola virus disease and its longer-term consequences, with the continued inclusion of vulnerable populations such as pregnant women, newborns, children and older people in future research. 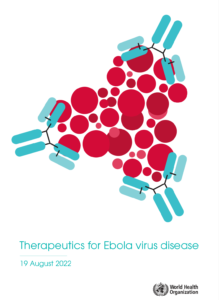 Back to the DRC for More Research, Studies on Ebola treatment

The clinical trials used to shape WHO’S guidelines for Ebola treatment were conducted during the Ebola outbreaks that have raged in central and west Africa over the past six years; the largest trial was conducted in the Democratic Republic of the Congo (DRC) which saw a major outbreak in 2018-2020, as well as small outbreaks since then.

Ebola is a severe and too often fatal illness, and previous outbreaks and responses showed the importance of early diagnosis and treatment with optimized supportive care that includes fluid and electrolyte repletion and treatment of symptoms.

“This therapeutic guide is a critical tool to fight Ebola,” said Dr Richard Kojan, co-chair of the Guideline Development Group of experts selected by WHO and President of ALIMA, The Alliance for International Medical Action.

“It will help reassure the communities, health care workers and patients, that this life-threatening disease can be treated thanks to effective drugs,” said Kojan.

“From now on, people infected with the Ebola virus will have a greater chance of recovering if they seek care as early as possible,” he said. “As with other infectious diseases, timeliness is key, and people should not hesitate to consult health workers as quickly as possible to ensure they receive the best care possible.”

The DRC has now recorded 14 Ebola outbreaks since 1976, including six since 2018. The most recent outbreak, which began in April, was declared to be over by DRC and WHO authorities last month — with fewer cases and deaths (five) than previous episodes due to a swift response including vaccinations.

Vaccinations were launched less than a week after the outbreak was declared, using an ultra-cold chain freezer in Mbandaka so vaccine doses could be stored locally and safely, and delivered effectively.

That enabled 2,104 people to be vaccinated, including 1,307 frontline workers and 302 contacts. In the previous outbreak in Equateur Province from June to November 2020, 130 people were infected and 55 died.

An Additional Tool for Ebola treatment Along With Clinical Care Guidance

The new Ebola treatment guidelines are meant to complement clinical care guidance that outlines the optimized supportive care Ebola patients should receive including factors such as relevant tests, pain management, nutrition and co-infections. But the recommendations only apply to the Ebola virus disease caused by Ebola virus (EBOV; Zaire ebolavirus).

“Advances in supportive care and therapeutics over the past decade have revolutionized the treatment of Ebola. Ebola virus disease used to be perceived as a near certain killer. However, that is no longer the case,” said Dr Robert Fowler of the University of Toronto and co-chair of the Guideline Development Group of experts selected by WHO.

“Provision of best supportive medical care to patients, combined with monoclonal antibody treatment — MAb114 or REGN-EB3 — now leads to recovery for the vast majority of people,” he said.