The World Health Organization (WHO) today launched a global AWaRe campaign, which aims to support national health systems to make more judicious use of lifesaving drugs so as to combat a worldwide trend of antimicrobial resistance (AMR) – including increased pathogen resistance to common antibiotics, antivirals and anti-fungal medications.

However, WHO’s own 2018 Report on Surveillance of Antibiotic Consumption shows that some of the biggest countries worldwide, including the US, China and India, have not submitted even the most basic data on total amounts of antibiotics consumed nationally every year by their countries’ health systems.

Ironically, the US Food and Drug Administration (FDA) does report on animal antibiotic use; that data shows the US to be the largest net consumer, by far, of antibiotics in animal agriculture in comparison to most European countries combined.

In light of the growing urgency of the AMR threat – which a major new UN report in April said could lead to as many as 10 million deaths by 2050 – some leading AMR researchers and advocates from the United Kingdom, Thailand, Australia and the US, are saying that a simple global metric is needed to track the quantities of drugs that countries are actually using.

Their work, available at Antibioticfootprint.net, and supported by a grant from the Wellcome Trust, compares aggregate use of antibiotics by country, for human and animal sectors, relying upon publicly available, official data. (See also In Focus). 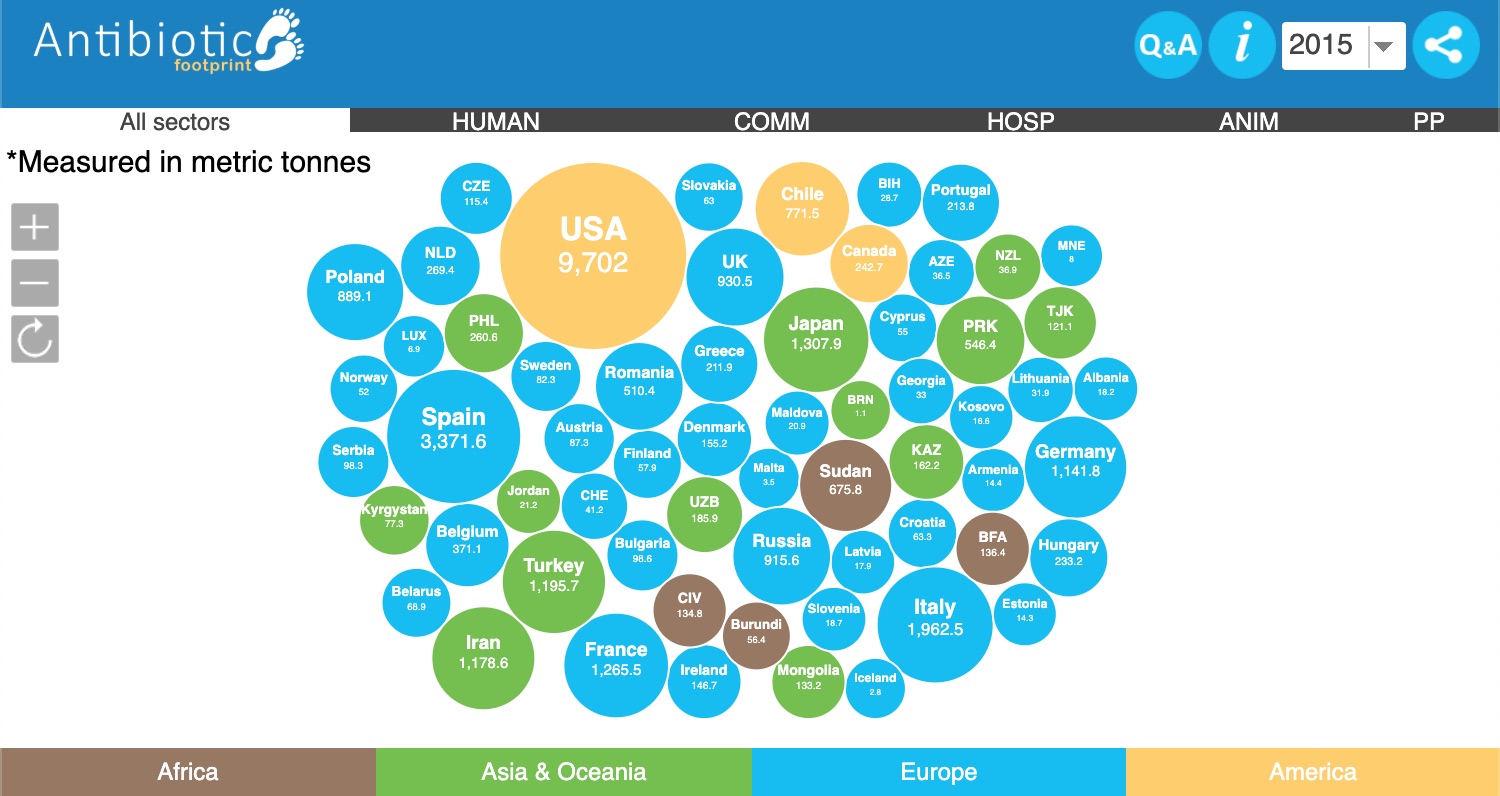 Papers published out of the project in the Journal of Antimicrobial Chemotherapy as well as by the Center for Disease Dynamics, Economics, and Policy (CDDEP) make the argument that a simplified “antibiotic footprint” is needed to communicate to the wider public the magnitude of antibiotic use in humans, animals and industry.

The antibiotic footprint project builds upon a concept originally developed by a Thai researcher,  Direk Limmathurotsakul at Mahidol University, Bangkok, and then adopted by other leaders in the AMR field, including:  Ramanan Laxminarayan of CDDEP, New Delhi,  Marc Mendelson, of the University of Cape Town, and Philip Howard, President of the British Society for Antimicrobial Chemotherapy (BSAC).

In an interview with Health Policy Watch, Howard called the footprint a “One Health” Approach to antimicrobial resistance.  “At the moment every country you look at through official data sources considers human and animal [antibiotic] consumption separately. We wanted to show everything in a single place,” he said.

He noted that this holistic approach is important because recent evidence indicates that if you can “reduce the amount of antibiotic use in animals, then you can reduce resistance in humans by as much as 24% — with the strongest correlation among people working in food production.”

He said that the footprint’s data, all peer reviewed, is based solely upon official data submitted to WHO, other international agencies or published by national governments, but often buried in the fine print of highly technical sources.

“What the antibiotic footprint tries to do is to pull together freely available information, ideally information that has been submitted to WHO about antibiotic consumption, World Organization for Animal Health, or published by national governments,”  said Howard.

Currently there are very wide regional discrepancies in countries that report on antibiotic consumption to WHO or others, said Howard. “If you look at the countries who are submitting data on human use of antibiotics, you will see Europe is very good –  85% of countries submit data, whereas in the Western Pacific Region it is only 22%; in the Americas it’s only 17% percent of countries, and then Africa has 9%; and there is no data submitted from South East Asia.”

Limmathurotsakul says that in developing the site he was inspired by similar efforts to create carbon footprints for awareness-raising about climate change. The simple formulation of the website allows the public to visually grasp trends, such as the very high use of antibiotics for animals in some countries; very consistent levels of reporting in Europe and Japan; and key gaps in data elsewhere. “If you don’t know the amount you are using, you can never reduce,” he pointed out. 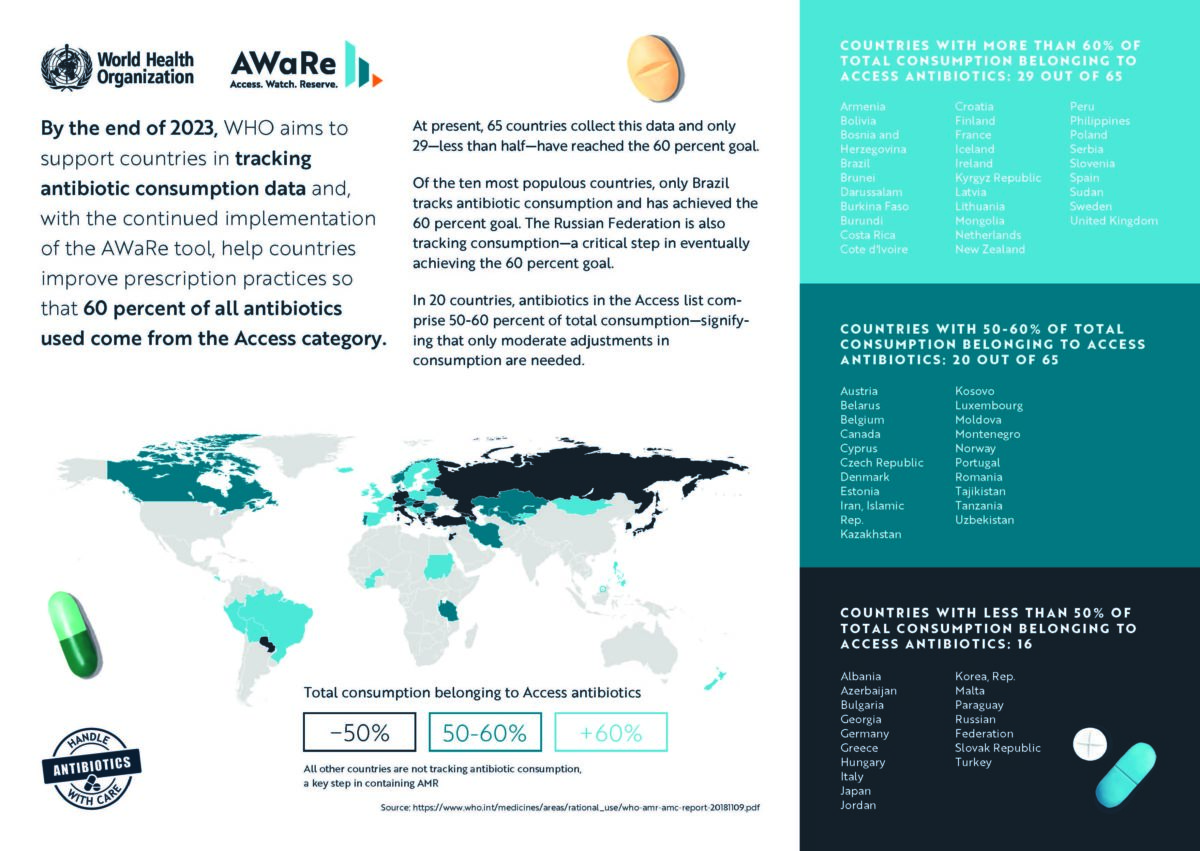 In contrast to the antibiotic footprint, the WHO AWaRe tool is aimed more squarely at the health sector – and at shifting from the use of drugs that should be held in reserve for the most serious health conditions, to drugs that are effective in combating most common pathogens, but less likely to stimulate trends of antimicrobial resistance.

The WHO tool can also be used to rationally expand access to antibiotics among groups that don’t currently get such drugs at all, said Assistant Director General for Access to Medicines, Mariângela Simão, speaking today at a WHO press briefing.

“It is a tool that countries can use to reduce antimicrobial resistance, but also a tool [for supporting] use of antibiotics where access is low,” said Simão, noting that an estimated 1 million children die every year from treatable bacterial disease linked to the lack of antibiotic treatment.

The tool helps hospitals and health systems assess and classify their drug use in terms of categories defined by WHO as Access, Watch and Reserve, said Hanan Balkhy, WHO’s new Assistant Director General of Antimicrobial resistance. The 19 medicines in the  “Access” category can be made widely available without high risks of stimulating antimicrobial resistance.  Amoxycilin is an example of such a drug, used for many common infections, she said. Another 11 drugs in the “Watch” category should be used only as a second resort, and not at all in animal health; another class of antibiotics, Fluoroquinolones belong in that category. Finally, there is a list of 7 “Reserve” drugs should only be used as a last resort, Balkhy explained.

Out of WHO’s 194 member states, some 65 countries worldwide are reporting to WHO on their antibiotic use through use of the AWaRe tool, Balkhy said.  Of those, only 29 countries meet the goal recommended by WHO for 60% overall use of drugs in the lowest-risk “Access” category.

While national monitoring of aggregate drug consumption would still be required to use the WHO tools, pulling together such data globally is difficult, Balkhy asserted, since “there is not one single tool that all countries are using.”

The AWaRe tool will be formally launched Wednesday at the Second Ministerial Conference on Antimicrobial Resistance, which is taking place 19-20 June in Noordwijk, The Netherlands, in collaboration with WHO, the Food and Agriculture Organization (FAO) and the World Organization for Animal Health (OIE).

The conference will look at ways to advance the Global Action Plan on Antimicrobial Resistance, approved by the World Health Assembly 2015.  The Global Action Plan takes a multi-pronged approach to combating AMR, with more rational and optimal use of existing drugs in humans and animals; development of new drug therapies; more effective management of sanitation and hygiene in health facilities, livestock production and communities, where sewage and waste may provide a fertile breeding ground for resistant microbes; as well as improved surveillance, research and awareness-raising.

Balkhy acknowledged that the AWaRe tool addresses just one of the “big pieces of this big mosaic, of antimicrobial resistance that we all need to tackle.  The other pieces are just as critical, and they all have to be put into place to slow down and mitigate AMR. But if we don’t do this, it will probably lead to a halt in modern medicine as we know it today.”