The most likely way that the SARS-CoV2 virus spread in Wuhan was from an animal intermediary that transmitted the virus from bats to humans, while the least likely was that it resulted from a laboratory “incident”, according to the World Health Organization (WHO) team on the origin of the virus, which completed a month-long investigation in China on Tuesday.

Despite reviewing thousands of tests on wild and farm animals in the country, it has not been possible to identify any animals infected with SARS-CoV2 and team leader Dr Peter Ben Embarek, told a press conference in China on Tuesday that more research needed to be done on the cold chain supply of frozen wild animals.

China has been pushing the theory that the virus was imported into the country via frozen foods for some time now. Dr Liang Wannian, head of the Chinese expert panel on COVID-19, told the press conference on Tuesday that “studies have shown that the virus can survive for a long time not only at low temperatures, but also at refrigerator temperature, indicating that it can be carried long distances on culturing products.”

Differences in WHO & China Narratives About Possibility That Virus Emerged Abroad

There were, however, subtle but significant differences in the narrative related by the official Chinese representatives at the media briefing and the members of the WHO team.

While China’s Wannian spoke about the frozen food chain, suggesting products carrying the virus that triggered the Wuhan clusters may have been imported, the WHO’s Embarek made it clear that more research needed to be done on whether the virus could have reached Wuhan from a domestic food source – or an imported one.

The Wuhan market, one of the places where the virus first appeared, sold “mostly” seafood products, including frozen foods, “but also vendors selling products from domesticated wildlife, farmed wild animals and their products,” said Embarek.

“So, there is the potential to continue to follow this lead, and further – look at the supply chain, and animals that were supplied to the market in frozen and other processed and semi-processed forms, or raw form.”

Peter Daszak, one of the scientists on the mission echoed Embarek’s remarks in a Tweet directly from the press conference: “KEY COMMENT: Recommendations include sampling potential intermediate hosts & bats both inside & outside China. Possible role of cold chain – incl. “Frozen wild animal that could have been infected by [progenitor] of SARS-CoV-2.” 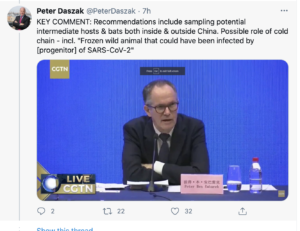 What the Chinese and international scientists did seem to agree upon was that there was little possibility that the virus had somehow escaped from the Wuhan Virology laboratory – as some voices in the administration of former US President Donald Trump had tried to suggest. They also agreed that there was little evidence that people were directly infected from bats harboring the coronavirus themselves.

Studies have shown that coronaviruses most closely related to SARS-CoV2 are found in bats, which suggests that these animals may be the original reservoir of the virus that causes COVID-19.

Embarek said that the team had investigated whether there had been direct zoonotic spillover from bats to humans but the genome sequencing of the virus in bats was too different from the SARS-CoV2 that emerged in humans to indicate direct transmission, and there was also no obvious connection between Wuhan residents and bats.

“All the work that has been done on the virus and trying to identify its origin continue to point towards a natural reservoir of this virus and similar viruses in bat population,” said Embarek.

“But infection directly from a bat to the city of Wuhan is not very likely. And therefore, we have tried to find what other animal species were introduced and were moving in and out of the city that could have potentially introduced the virus.”

Pangolins, which are widely sold in Chinese markets as wild foods, are another key animal source that was mentioned by both Chinese and international teams at the press briefings as a possible original reservoir – or an “intermediate host”.

At the press briefing, China’s Wannian also suggested cats and minks could have become the “intermediate source” for the initial coronavirus infections that reached humans.

China has pointed a finger at minks in the past, after SARS-CoV2 infections in mink farms in Europe had become a widespread issue, leading to the culling of tens of thousands of mink over the past year.

However, it is widely assumed that the minks were infected by humans after Europe became the epicenter for COVID-19 last spring. WHO’s officials said in December that there is so far no evidence that coronaviruses similar to SARS-CoV2 circulated in the wild in Europe – before the pandemic.

No Evidence of Virus Circulation in Wuhan Before December 2019

The Chinese and WHO/International expert team, also did not find any concrete evidence of the virus circulating in Wuhan before December 2019, said Embarek.

However, when the first Wuhan virus clusters were identified in December, these were not confined only to the city’s seafood market – that was initially perceived as the original source of the outbreak  – but popped up elsewhere around the same time.

“We agree that we have found evidence of wider circulation of the virus in December 2019,” said Embarek. “It was not just only a cluster outbreak in the Huanan market, but the virus was also circulating outside of the markets in a very classical picture of the start of an emerging outbreak.”

While the virus, which circulates mainly in wild bats and some pangolins, is believed to have jumped at some point to an “intermediate animal host”, which in turn infected the first humans, the team has not gotten close to how, where or when that animal-human leap really occurred.

During the visit, the team reviewed sampling from extensive PCR tests of livestock and poultry from 31 Chinese provinces and 50,000 samples of the wild animals covering 300 different species, but not a single one was found to be infected with SARS-CoV2.

This was why the team flagged that more research needed to be done on the cold chain supply to see whether infected frozen and semi-procssed animal products, including wild animal products, could have been the virus conduit, said Embarek.

Dutch virologist Professor Marion Koopmans also told the press conference that further animal studies needed to see what other animals could have played a role as intermediate hosts.  Rabbits had been confirmed as susceptible to SARS-CoVD, while ferrets, badgers and bamboo rats are also suspected of being susceptible.

“The way that is interpreted is to really say, well, if they were there then, then maybe there could have been similar animals earlier. It is an entry point for a traceback investigation, “ said Koopmans.

However, Koopmans told the press conference that reports of the virus circulating in Italy earlier than December also need to be investigated.

She was referring to several recent Italian publications suggesting that SARS-CoV2 antibodies were found in blood samples of Italians who had undergone screening for other reasons during the autumn of 2019. Another study found traces in sewage in Milan and Turin.  Those findings suggest that the virus was already circulating under the radar in the country earlier than had been believed.

“A couple of publications suggest that for instance, in Italy the virus had been already in circulation in December, maybe late November 2019, but it is difficult to know because the methods for that are not were not confirmatory,” said Koopmands. “So, in the next step, what we say is, we should really go and search for evidence for earlier circulation, wherever that is indicated.”

The international, multidisciplinary team was established by a World Health Assembly mandate to design and conduct a series of studies to trace the origins of SARS-CoV2 and the route of its introduction into the human population. The team is comprised of 17 Chinese experts and 17 international experts. Their long-awaited visit to China was delayed for months as Chinese officials, who have been keen to cast the blame for the virus elsewhere, stonewalled over the terms and conditions.